Santa Claus is coming to town 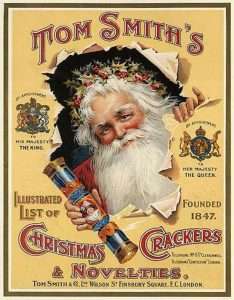 Christmas celebrations in the early years of Gilpin County were elaborate affairs. Parades marched down Central City’s streets, parties took place at houses in all of the towns, stores were packed with people buying presents, and grudges were forgotten, even if only temporarily. This was especially important during the years of the Civil War, with Colorado’s newspapers hoping that the coming New Year would bring good news on the war front and a chance to move on to better times.

On Christmas Day in 1863, for example, the editors of the Daily Mining Journal reported that one of the happiest Christmas festivals ever passed under their windows. Two horses were pulling a wagon loaded with handmade dolls that had taken weeks to make, and two Christmas trees. The occupants of the wagon were “wishing Merry Christmas to everything with life, whether it human or not.” The occupants, which the newspaper described as “several parcels,” were Anna Smith, Minnie Lull, Fanny Lull, Lila Storrs, Mary McKay, Jennie Smith, Lilly Tyler, Ella Tyler, and Hattie Keith. Just a few days earlier the editors had informed the girls it was a good time for them to die. What had inspired such a harsh judgement was not revealed, but since the girls had ignored it, the editors “took back the ungallant speech and wished them all a long and happy life.”

In addition to forgiveness, Christmas also brought Santa Claus to town. His first recorded public appearance in Gilpin County came in December 1864 at a fair for the First Baptist Church of Central City. Held in the Montana Theatre, the event took place on December 22nd and 23rd.

Entertainment consisted of Tableaux Vivants, or living portraits, under the direction of Madame Hernandez. The Post Office also set up shop at the festival in order to deliver last minute packages and letters. Among the many items offered for sale were creations from the Sewing Society of the church, and refreshments included cake, ice cream, candy, oysters, cheese, and coffee and tea. The Central City Band and amateur performers provided live music both nights, and the centerpiece was an illuminated Christmas tree loaded with fruit.

The star of the two evenings, however, was Santa Claus, who was “present by special engagement,” and the Daily Mining Journal reported that “children especially will find this a rare and innocent sport.”

Most people thoroughly enjoyed the evening and the visit from St. Nick, according to the newspapers, but the editors of the Daily Mining Journal were less than pleased. The crowds were so great that the organizers began to run out of refreshments, which dampened the editors’ spirits, but when Santa Claus arrived and distributed gifts from the tree it livened things up a bit. Overall, however, they were disappointed by the festival and felt like “denouncing Santa Claus for a swindler,” but refrained from doing so because “all the little folks are so fond of him.” The newspaper did report that the event had succeeded in raising a great deal of money for the church. Between condemning Santa and wishing death upon young girls, the editors of the Daily Mining Journal seemed to be lacking in Christmas spirit.

The newspapers also reported on Santa’s visits to children. On Christmas Eve 1863, Santa visited the daughter of Mr. and Mrs. McGaskill, and slipped a ring onto her finger while she slept. The next morning the little girl told her parents that she had a dream that someone had put a ring on her finger, but it was too big and had gotten lost in the bed while she slept.

Santa’s next major appearance came in 1870 at the Black Hawk Presbyterian Church. The leaders of the church’s Sunday School, reported the Daily Register Call, decided to give the children a “jolly good time” on Christmas Eve at the church. They engaged Santa Claus to distribute gifts from the Christmas tree “with a liberal hand.” The newspaper warned its “nervous” readers and young children not to be frightened of the “uncouth costume of the sooty old fellow” because it covered “a kindly generous heart.”

By 1872, Santa Claus became a regular fixture in newspaper advertisements leading up to Christmas. In December that year Best’s Pharmacy reported that Santa Claus had arrived and that his stock of toys, toilet sets, perfumes, and other fancy goods could be had at the store. In the years that followed the ads for all of Central City’s stores proclaimed visits from Santa Claus, began to feature pictures of the man himself, and alerted readers that any and all Christmas gifts could be had.

“But I heard him exclaim ere he drove out of sight, Happy Christmas to all and to all a good night.”

END_OF_DOCUMENT_TOKEN_TO_BE_REPLACED

Benefitting the county, schools, and much more By Don Ireland   This year marks the 30th anniversary of casinos opening in the former little mining towns of Black Hawk, Central City and Cripple Creek, Colorado. In those early years, smoking was allowed inside ... END_OF_DOCUMENT_TOKEN_TO_BE_REPLACED