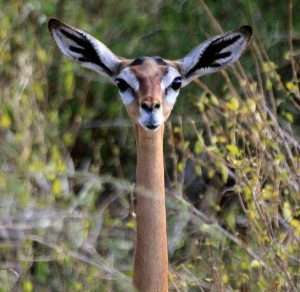 In Northern Kenya, amongst arid scrub desert bordering the Ewaso Ng’iro River, lies Samburu National Reserve. It and the adjacent reserve Buffalo Springs are home to an unusual and rare group of animals viewed only in Northern Kenya, Ethiopia, and Somalia. They are known as “The Special Five:” Somali ostrich, Grevy’s zebra, beisa oryx, reticulated giraffe, and gerenuk. Samburu N.R. was one of the locations that Elsa the lioness of “Born Free” fame spent part of her life.

The Somali ostrich’s blue-gray neck and legs differentiate it from the common ostrich. Grevy’s zebra have narrower stripes than their plain’s relatives and their larger ears help dissipate body heat. Beisa oryx are perhaps the most majestic of African antelope sporting long, straight, ebon horns. The reticulated giraffe’s pattern is more distinct than that of the Masai or Rothschild’s giraffe. Red-billed oxpeckers are frequently observed climbing up and down the giraffes’ necks and heads in search of insects. The most unlikely-looking of the five is the gerenuk. Their name is derived from the Somali word garanuuk which means “giraffe-necked.” Gerenuks’ long necks enable them to browse higher in the trees than other antelope, but not as high as the giraffe, whereby filling a perfect niche.

Elephants in the reserve are the friendliest I’ve ever encountered, which tells me that they aren’t persecuted. Kirk’s dik-dik antelope dart in and out of the saltbush keenly aware of their surroundings – its diminutive size makes them a potential meal for predators both on land and from the sky. Yellow-necked spurfowl scurry just in front of our Land Rover and a grey-headed kingfisher sits perched on a branch by the river where a lappet-faced vulture glides in for a landing. Vulturine guineafowl peck the ground for ants. There are forty leopards in the reserve which my guide considers too many. We were lucky enough to spend time with a female and cubs on a couple of occasions. Twice we encountered a mother cheetah and her three offspring. The cubs were fully grown and would be leaving her soon, but for now followed as she led on hunts. In stealth mode looking sleek and fast, they hadn’t eaten for days when she just missed making a Grant’s gazelle kill.

Back at Samburu Intrepids Camp, I settled at the bar for a cold White Cap Lager with tomato juice when, as is the habit, my bartender asked what I had seen on my game drives that day. I informed him that I’d seen a monkey doing the backstroke in the pool, which was my only attempt at humor during my entire stay in Africa that got a laugh. A Samburu tribesman stood guard during breakfast and lunch with a slingshot to fend off the vervet monkeys lest they snatch the food from under your nose in the blink of an eye. By the way they bolted away when he caught sight of them, it was apparent that they’d been walloped a time or two. Bats swooped inside the open-sided dining hall at dinner.

Motoring along the river during my first game drive, my guide Dom spotted fresh lion tracks in the sand. Knowing that they were close, he combed the riverbank in search of them. As I got the feeling that an encounter was about to happen, Dom sighted seven lions in the distance. Crouching low to the ground and moving incrementally slowly forward, they had spied a group of warthogs contentedly foraging. Oblivious to the lions’ ever-tightening noose, one of the lionesses outflanked the warthogs getting around them behind a small rise. At once she appeared right next to the quarry when the adult, juvenile, and two babies scattered in different directions. The short chase ended in a cloud of dust with one last, pitiful, desperate squeal from the juvenile warthog. Since there was enough to go around for all of them with no males present, the devouring of their prize was orderly for lions with only a few snarls.

END_OF_DOCUMENT_TOKEN_TO_BE_REPLACED

Benefitting the county, schools, and much more By Don Ireland   This year marks the 30th anniversary of casinos opening in the former little mining towns of Black Hawk, Central City and Cripple Creek, Colorado. In those early years, smoking was allowed inside ... END_OF_DOCUMENT_TOKEN_TO_BE_REPLACED