Saluting those who answered the call of duty 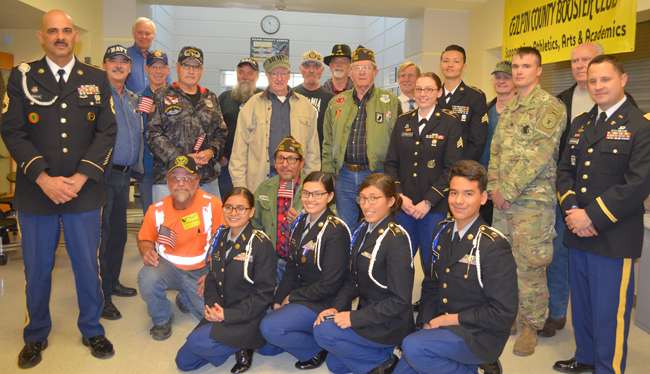 Gilpin County military veterans were honored with a tribute on Thursday morning, November 9, at Gilpin County School. Community members, students, administration, and active duty military personnel gathered to express thanks to these selfless individuals who sacrificed that we might live in a free country.

The middle school band struck up “American Patrol” and other patriotic tunes while members of the Daughters of the American Revolution (DAR) distributed copies of “The Flag Code.” The Junior ROTC from Abraham Lincoln H.S. in Denver solemnly presented the colors, followed by the placing of the POW/MIA flag by Sgt. 1st Class Jose M. Caraballo (Ret.) Members of Girl Scout Troop 4565 and Cub Scout Pack 251 led the Pledge of Allegiance and student Lauryn Parkhurst beautifully performed the National Anthem. Gilpin High School senior Carly Johnson, who served as master of ceremonies, welcomed the veterans and kept the program moving smoothly.

Superintendent David MacKenzie stated, “Veterans are people who unselfishly place their lives on the line for our freedom. They are ordinary people until they answer the call of duty. To all our veterans, thank you. We salute those who are currently fighting for our freedom. ‘Our flag does not fly because the wind moves it. It flies with the last breath of each soldier who died protecting it.’”

Of course, it would not have been a proper Veterans Day celebration without the fifth graders and the Montessori upper elementary pupils singing “Fifty Nifty United States.” Other music included the song “Colorado!” performed by the fourth grade class and “My America,” sung by the middle school/high school choir. The high school cheerleaders also presented a respectful tribute to the veterans with their routine performed to the song “Where the Stars and Stripes and the Eagle Fly.”

Active duty military guests spoke briefly. 2nd Lt. Ryan K. Lindeman recalled enlisting in the military after the September 11 attacks. Serving in the military meant “being part of something bigger than myself.” Lt. Lindeman is the son-of-law of Gilpin Elementary School Principal Heather Huntoon.

Sgt. Dustin Shepherd of the U.S. Army had always thought of a veteran as an old man or woman who had fought to make sure we had a free country. “I want to repay them by stepping in their boots,” he said.

Carly Johnson called attention to the old U.S. flag made by former Gilpin students out of construction paper links. Each star on the flag represented a service member in active duty. She asked audience members to stand if they had ever had a family member who was in military service. The majority of those in the audience rose to their feet.

Johnson then quoted a speech given by former Vice President Dick Cheney on November 11, 2008, at Arlington National Cemetery in Virginia. In his speech, Cheney thanked the veterans of all wars. He said there is no secret behind why America remains a beacon of freedom to the world. “Every generation has stepped forward when needed to defend America and its ideals. Every one of them deserves the thanks and the admiration of our entire country.”

Accordingly, Johnson thanked the Gilpin vets and expressed the admiration of the entire country and our community.

The centerpiece of the occasion was the opportunity afforded the veterans to introduce themselves, tell what branch of the military in which they had served and where they had been stationed, and any other remarks. The vets served in every branch of the military from the 1950’s onward, from Korea to Viet Nam, Germany, France, Afghanistan, and points of the United States. They served as machinists, bombardiers, military police, and airborne rangers. They had relatives who served in both World Wars and had sons and daughters in active duty. Some had served for decades or were fifth generation veterans. Some enlisted as teens and recalled the horror of watching their young buddies die around them during battle. American Legion Commander Teo Dominguez, one of the veterans, gave a remembrance of veteran and Gilpin community member Roy Blake, who passed away recently.

Without exception, all were grateful to be at the assembly and appreciated the audience for being there. With all they had accomplished during their lives, the thing they were most proud of was serving their country.

Following the veterans’ words, there was a moment of silence and the playing of taps by student Sasha Sonsino and music teacher Misti Ebers.

Sgt. Ashley A. Cordero, U.S. Army, delivered the keynote address. Cordero grew up on a farm in Wisconsin. “It was hard work, but I wouldn’t change it for anything,” she noted. She said the morals and values instilled in her at a young age made her who she was. Cordero was competitive and wanted to be the best she could be. She went to college and earned a master’s degree, looking for fulfillment, but felt dissatisfied.

“I joined the Army. There I found leaders and mentors.”

If she could give advice to her younger self or to today’s youth, she would say, “Do things for others. It’s good for them and for you. Keep learning – it gives you a sense of accomplishment and boosts your confidence. Take opportunities when they are presented and don’t be afraid to fail. Failure can simply be a stepping stone to eventual success.”

She said Veterans Day is an opportunity to celebrate the choice one makes to serve. For many, this will mean multiple tours of duty, as only about one percent of our population serves in the military. She urged the veterans to keep telling their stories, then ended with thoughts by former President John F. Kennedy.

“As we express our gratitude, we must never forget that the highest appreciation is not to utter the words, but to live them. What you leave behind is not what is engraved in stone monuments, but what is woven into the lives of others.”

Our veterans have woven their selfless sacrifice into our lives. Let us appreciate our veterans and active military members, not just on Veterans Day, but every day, by living in a way that honors their service and makes it worth the cost.

END_OF_DOCUMENT_TOKEN_TO_BE_REPLACED

Benefitting the county, schools, and much more By Don Ireland   This year marks the 30th anniversary of casinos opening in the former little mining towns of Black Hawk, Central City and Cripple Creek, Colorado. In those early years, smoking was allowed inside ... END_OF_DOCUMENT_TOKEN_TO_BE_REPLACED