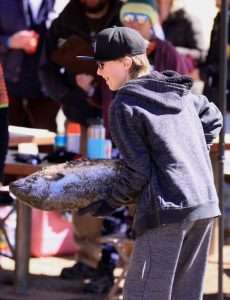 After hosting the Frozen Dead Guy Days Salmon Toss in Nederland, CO for sixteen years in a row, Hillary Stevenson needed a new venue for the event when the Sundance Café closed its doors. Turning to her friend Heather Hatwan, owner of the Stage Stop in nearby Rollinsville, Hillary found a perfect new home for the Salmon Toss, continuing the tradition.

Two 15 lb. frozen salmon were once again purchased from Northeast Seafood, Denver, CO, at a cost of $200. Contestants lined up to see who could make a fish fly the farthest. Ethan Johnson of Rollinsville took top honors in the children’s division with a heave of 23 feet, 11 inches. Donna Carson and Esther Winner drove from Denver to experience Frozen Dead Guy Days for their first time and take part in the Salmon Toss. As close a contest as you’ll ever witness, Donna’s salmon soared 28 feet, 5 inches, and Esther’s 28 feet, 6 inches to secure first place. They both promised to return next year and resume the rivalry. Jeff Cole of Erie, CO, was sitting pretty in the men’s division with a throw of 45 feet, 1 inch. He had taken 3rd place two years ago and 2nd place last year. With one of the salmon unusable and the other broken in half with only skin holding it together, it looked to be Jeff’s year when a past winner arrived on the scene at the last minute. “Big” Ed Tarleton put on his rubber gloves and hoisted the salmon. It was doubtful at that point the mutilated fish would even stay in one piece let alone attain great distance. With the technique and heart of a champion, Ed’s salmon sailed 47 feet, 0 inches! All of the first place finishers received a gift certificate courtesy of the Stage Stop.

END_OF_DOCUMENT_TOKEN_TO_BE_REPLACED

Benefitting the county, schools, and much more By Don Ireland   This year marks the 30th anniversary of casinos opening in the former little mining towns of Black Hawk, Central City and Cripple Creek, Colorado. In those early years, smoking was allowed inside ... END_OF_DOCUMENT_TOKEN_TO_BE_REPLACED