Saints go marching in to defeat Eagles in football 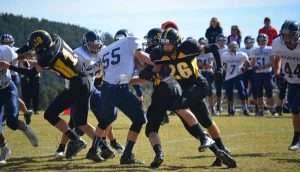 Gilpin volleyball has one win, one loss

Gilpin High School’s football athletes lost to the Vail Christian Saints 48-16 on Saturday, October 10, in a home conference match-up. The Saints marched into the end zone for 7 touchdowns to hand the Eagles the loss. Gilpin now owns a 3-3 record, 1-1 at home.

Vail Christian (VC) dominated the first half, scoring 2 touchdowns and one conversion in the first quarter and 3 TD’s and 2 conversions in the second quarter, to make the score 36-0 at halftime. VC also scored one touchdown in the third quarter, and the score was 42-0. Gilpin hung on, however, with a touchdown and conversion by Chase Boulter, and the score at the end of the third period was 42-8. The Saints scored within the first minute of the fourth quarter, but failed on their conversion attempt. The final moments of the game saw VC fumble the snap, with the Eagles’ Manny Gomez scooping up the ball to sprint for the end zone and 6 points. Boulter made good on the conversion, and the final score was 48-16 Saints.

The Eagles struggled to gain first downs, mustering only 8 during the game. The Saints capitalized at recovering some Gilpin fumbles, but Gilpin players were successful at keeping the Saints to only 3 conversions.

Jon Lovett was named Defensive Player of the Game, with 8 solo tackles and one assisted tackle, one interception, and 4 carries for 16 yards.

Boulter was the leading Gilpin rusher, gaining 76 yards in 23 carries. Matthew Immordino came in with 55 yards in 23 carries, and Bjorn Tomlinson followed with 21 yards in 4 carries. The Eagles had a total of 168 yards rushing and 70 kickoff return yards (29 by Braedyn Perez, 22 by Jonathan Ramsey, 12 by Jack Ball, and 7 by Austin Boulter), for a total of 240 yards. VC ran for 385 yards in 41 carries.

Gilpin garnered 33 kills, Lindsey James leading with 11, Alex Martin coming in with 9, Jada Gohdes with 7, Alexis Kennedy with 4, and Sierra DeLeon with 2.

Martin was tops in serving aces with 3. Teammates who hammered one serving ace each were James, DeLeon, Kennedy, and Cicely Lepro.

James contributed 2 solo blocks, followed by DeLeon with one.

DeLeon was also first in ball handling assists with 19; Lepro helped with 3.

Martin was the leader in serving received success with 19. Lepro came in with 13, Nadeau with 10, Kennedy with 4, and Jessie Morgan with one, for a total of 47.

Martin and James tied with 7 kills each for the Lady Eagles; Gohdes got 6, and Carlota Saez-Aymerich contributed one. James also blasted one serving ace.

The team came in with 63 digs, each team member contributing a share. Martin led with 17, DeLeon had 9, Nadeau and Lepro had 7 apiece, Gohdes, Saez-Aymerich, and Alexis Kennedy had 6 each, Breanna Kennedy had 4, and James had one.

DeLeon was first in ball handling assists with 17, helped by Lepro with 2.

Lepro was also first in serving received success with 26, while Martin came in with 18, Nadeau with 4, Saez-Aymerich and Alexis Kennedy with 3 each, Breanna Kennedy with 2, and James with 1.

END_OF_DOCUMENT_TOKEN_TO_BE_REPLACED

Where the dead get to tell their story By Jaclyn Schrock On Saturday, August 21, the Gilpin Historical Society held their annual Cemetery Crawl. Tickets allowed the shuttle of hundreds of guests from the Teller House parking lot to the Cemetery. Depending on v... END_OF_DOCUMENT_TOKEN_TO_BE_REPLACED