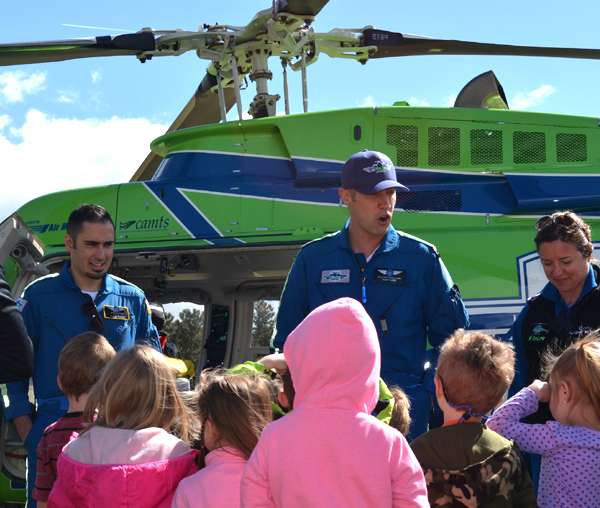 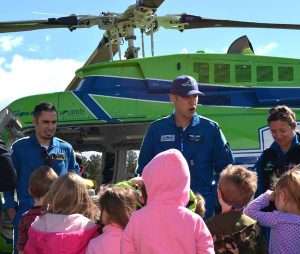 Children at Gilpin Elementary School had an exciting and instructive time at Safety Day on Thursday, May 19. The weather cooperated with sunny skies and a refreshing breeze as the youngsters witnessed the landing of an Air Life helicopter, viewed the insides of an ambulance, and crawled on their tummies through a covered maze. It was all part of the annual event that teaches safety and familiarity with first responders.

Everyone gathered that morning on the football field to honor Katie Yocom, Montessori preschool and kindergarten teacher, who recently saved a student’s life. School resource officer Lee Ramsey told the crowd what happened.

Yocom was presented with a Citizen Lifesaving Award from the Gilpin County Sheriff’s Office, and the student, Makaela Johnson, received a comforting teddy bear. The student was praised for knowing how to get an adult’s attention.

Yocom calmly persevered throughout the rescue, having to perform the Heimlich maneuver a total of five times before the piece of food actually came out. She was quick to share credit.

“Everyone was calm. Every teacher would have done the same. I’m just glad I was there to help.”

Yocom is well-versed in handling emergencies. In addition to teaching, she has been a dispatcher for Flight for Life for the past 30 years. She also served as an emergency medical technician for 17 years, 11 of those on an ambulance crew, before becoming a teacher. Amazingly, she has been current on CPR since the age of 12.

The recognition of Yocom was followed by a timely training session on use of the universal sign for choking: hands clutched to the throat.

After presenting the plaque to Yocom, right on cue Denver’s Health One Air Life helicopter arrived and touched down on the field. Classes began a rotation to the various stations to observe the helicopter and other apparatus.

“The helicopter is like a flying ambulance,” pilot Jake Harmon told excited preschoolers. “We can go 150 miles per hour to get to an emergency!” The little ones climbed aboard to see what it was all about, and flight nurse Cori Gobell helped them out afterwards.

Interpretive ranger Stephen Iwen from Golden Gate Canyon State Park told lower elementary students how an avalanche can be a source of food for bears. During an avalanche, non-hibernating animals can become trapped in the snow and ice. This forms a frozen food section for the bears, providing protein when they first emerge from hibernation. It all fits together, said Iwen. “Our world is like a giant puzzle, and every part is an important piece.”

Gilpin County 911 dispatchers manned the emergency services air trailer, or the communications center. They trained the students that when calling 911, the most vital information to know is an address or phone number. It’s also important to know when to hang up – only when the dispatcher says you may.

Gilpin Ambulance Authority had two units at the event. Paramedic Jessica Brown and EMT Jerra Matthews explained the defibrillator, the trauma shears for getting clothing off quickly, and the monitor for blood pressure readings. The kids were especially interested in a special plastic bag. “You’re gonna laugh,” warned Brown. Turns out it was a vomit bag. They laughed.

Older elementary students had fast-paced activities in the afternoon. Chris William from the Black Hawk Fire Department briefed the children, who were all in teams of three.

“In past years, you’ve had all the safety speeches. Today is a test of how much you learned. Your teams will be asked questions about calling 911. Once you’ve gotten all the questions correct, you’ll be released to go around the stations. All these people love you. It’s going to be a fun day!”

The prize for the winning class was an ice cream social with the responders next year. With this incentive, teams raced to answer the questions and get around to each station. At the “cop shop” they were tested on bullying. At the CPR station, they performed hands-only CPR on manikins. The park ranger quizzed them on which animal would be more likely to attack, a bear or an elk. (“Elk” was the correct answer.) Then it was on to the covered maze, where team members donned Central City firefighters’ jackets or helmets and crawled through the course. As they came out on the other end, they hurried to put out mock fires with real water from Timberline Fire Protection District firefighters’ hoses.

It was a fun day, and who knows? Perhaps, as with Katie Yocom, it will trigger a lifetime of interest in helping others with their emergencies, and maybe even save a life. 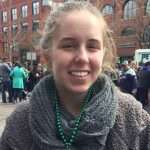