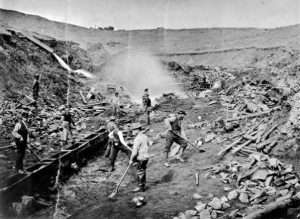 Looking back to the origins of this mining community

The miners of Russell Gulch and Gregory Gulch observed the Fourth of July, which occurred weeks after gold was discovered and the mining districts were formed. According to the late editor and proprietor of the Colorado Mining Journal, Ovando J. Hollister, in his 1867 book The Mines of Colorado: “In the first days of June (1859) Green Russell had discovered and commenced operations in the gulch that bears his name, a tributary of north Clear Creek, a little south of, and parallel with Gregory Gulch.”

The following two versions of the Fourth of July 1859 story are told by Arthur E. Pierce, a participant in the event. The first recollection was told by Pierce to Colorado’s first poet laureate Alice Polk Hill in her book Tales of the Colorado Pioneers (1884):

“That the early pioneers were not lacking in the feeling of patriotism that swells the breast of every true American citizen, which is especially manifested as each succeeding anniversary of our National Independence rolls around, is graphically shown by the following sketch of the somewhat ludicrous, but none the less patriotic manner in which a little band of “tender feet” celebrated the “glorious Fourth” in ’59. The particulars of which were furnished to me by one of the participants, Hon. A. E. Pierce.

“The sun rose clear and bright upon the morning of the eighty-third anniversary of the discovery of fire crackers, sky rockets, lemonade with-a-stick-in-it, soda water, and the ‘Great American Eagle.’ None of these things are supposed to be known or in use prior to 1776, at which time the Boston people resolved that ‘lemonade and soda water should take the place of ‘tea!’”

My informer was rather reticent about what the early pioneers of Colorado drank in lieu of lemonade and soda water, but it is surmised that they took the “stick” straight—there being no lemonade in the land.

“Well, on this occasion, when ‘old Sol’ got up before breakfast, in order to be on hand when the first gun was fired—he peeped over the tops of the surrounding hills and mountain peaks and smiled benevolently upon a little band of prospectors in Russell Gulch, who were successfully panning out sufficient of the glittering dust to enable them to pay fifty cents postage on letters back to ‘America,’ giving glowing descriptions of the hidden wealth of the rugged mountains.

There were ten young men in this little camp, and they determined that the day should not pass without proper observance. So they called a mass-meeting of themselves to consider the subject.

1st  Every man shall wear his best clothes, but no one shall be permitted to wear a ‘biled’ shirt (dress shirt with a starched front).

2nd National salute from revolvers. One extra shot for Pike’s Peak, one for Green Russell, and one for John Gregory.

3rd Oration by the orator of the day.

4th Recess—and lemonade (without any lemon).

7th Fall into line and march over to Gregory Gulch and see what the boys there are doing.

The Committee on Officers of the Day reported, giving every man in the camp an office.

The Committee on Flag reported no flag to be had nearer than Fort Laramie, two hundred miles north.

Here was a predicament. No flag, no Fourth. But it was soon remedied. Pioneers are equal to any emergency. One contributed a pair of old blue overalls, another a ‘biled shirt’ that he had brought from ‘the States,’ and another a red flannel under garment. From these a very respectable looking flag was soon constructed. This flag was long preserved by one of the boys as a memento of the period, and may still be in existence.

The Committee on Banquet reported the following:

Coffee, served in tin cups, to be washed clean for the occasion; overland style, a la no cream

Ordered, that to begin with, the cook shall wash his hands. But after the banquet he can let the dishes stand over, and use them for breakfast without washing, so as not to delay the procession.

The oration by the orator of the day was a broad gauge, double track ‘through-without-change’ affair. But unfortunately there being no newspaper reporters in the locality, the effort was lost to posterity. It was full of patriotism and so 4th, and started out something like this:

‘Fellow Citizens, La—That is gentlemen! The American Eagle soars.’ Here one of the boys broke in and wanted to know what he was ‘sore’ about? He was forth with arrested by the marshal for disturbing ‘religious exercises.’

The programme of the day was faithfully and patriotically carried out until most of the patriots had to be carried in, and ‘the subsequent proceedings interested them no more.” Most of the participants of this occasion are still living, and are honored and prosperous citizens of our State. One only of their number is yet digging away in Russell Gulch, where he has remained off and on, for a quarter of a century.

The second recollection is in the form of a letter that Pearce sent to the Weekly Register-Call July 2, 1909: “Just 50 years ago, July 4, 1859 I celebrated the first Fourth of July in this Rocky Mountain region in Russell Gulch. Our party was one of the first to enter the Gulch and opened a claim about one mile, I think, below the Green Russell party, we worked it that summer by sluice and rocker.

One of our party was a Mr. Sutton, who continued to live in the Gulch up until the time of his death just a few years since. I have not been in Russell Gulch but once since ‘59 and that was in ‘79 when I went over to visit my old companion, Sutton. We crossed the plans together in ‘58. Others of our mess were John L. Dailey and William M. Dailey, afterward prominent citizens of Denver, but both now passed away. Also a Mr. Henry Gibson, son of Thomas Gibson, one of the original proprietors of the Rocky Mountain News, afterward a prominent businessman of Omaha. I do not just recall the names of others.

On the Fourth of July mentioned our little band determined to celebrate Independence Day in a fit manner. We proceeded to organize by appointing every member to some office, or committee. Of course a Fourth of July celebration without a flag was not to be thought of; but we had none, and so far as I can remember there was not one in the Gulch or anywhere nearby. So our “Committee on Flag” met the emergency by proceeding to construct one from such material as could be dug up out of the camp out-fits. One member contributed a red flannel under garment, another a pair of blue jean overalls and a third produced a white “biled shirt,” (outlawed in camp) and from these a “Grand Old Rag” was soon constructed which though not a regulation banner and probably would not have received the approval of the Secretary of War, still was a fair representation of “Old Glory” and perhaps the first raised in Russell Gulch, and one of the first in the new Rocky Mountain mining camps. Henry Gibson told me in Omaha 20 years later that he still had the flag preserved as a memento of the occasion, and may have it still.

In the evening, after a hilarious day our little party fell in line and marched over the hill to Gregory Gulch, where Central and Black Hawk now stand, and joined in the miners and citizens of that camp in winding up the day, and night in, a fitting and true pioneer manner.”

END_OF_DOCUMENT_TOKEN_TO_BE_REPLACED

Benefitting the county, schools, and much more By Don Ireland   This year marks the 30th anniversary of casinos opening in the former little mining towns of Black Hawk, Central City and Cripple Creek, Colorado. In those early years, smoking was allowed inside ... END_OF_DOCUMENT_TOKEN_TO_BE_REPLACED