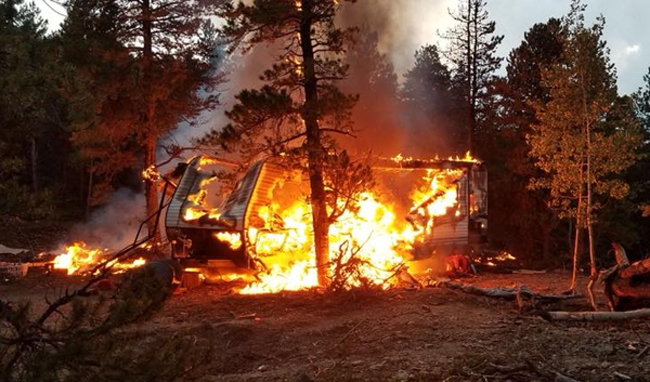 “Thank God for the firefighters!”

On Monday, August 6, 2018, Cody Allen’s heart started beating a little faster. Cody is a volunteer fire-fighter for Central City, and at 8:07 pm he got the call for what terrifies many residents in our dry, wooded haven we call home, a fire in Russell Gulch. Cody is part of the wildland fire crew that engages flaming threats to the forested area in and around Central City. The Central City wildland crew joined Timberline Fire and Black Hawk Fire already on the scene of a flaming husk of a camper off the Pewabic Mine Road south of the City. The flames were finding fuel in the surrounding trees and Central’s wildland crew went to work controlling the progression of the flames. Two and a half hours later, the threat was not only contained, but extinguished, and the Central City wildland crew gathered with Timberline for an After Action Review to discuss what worked well and what could have worked better. Resident Donna Parman reflected the attitudes of many locals stating, “I thank God for the firefighters who left their families at a moment’s notice to save us, our homes, our towns, our mountains. Thank you, each and every one…including dispatchers…EVERY SINGLE ONE!” in response.

I talked to Fire Chief Gary Allen about the cause of the fire and he said that the CBI (Colorado Bureau of Investigation) is investigating in coordination with the Gilpin County Sheriff’s office. Per Chief Allen, this is standard operating procedure for any fire since Timberline does not have a fire investigator of their own. At this time, there is no reason to suspect arson, but it is not ruled out. I asked the Chief about the possibility of this being connected to the known arson incidents near the Community Center and he said any connection “Is purely coincidental.”

Meanwhile, a BOLO (be on the lookout) went out from the Gilpin County Sheriff’s department for two white males wearing blue jeans, a black hoodie and a light red hoodie with a Kansas City Chiefs logo. I asked Captain Tom Ihme about the BOLO and he stated these are persons of interest that were seen leaving the area. They are conducting an investigation into the cause of the fire with CBI and at this time, there is not enough information to determine the cause. The subjects are wanted only for information related to the fire.

The Central City Fire Department has one paid member, the Chief, and the rest are volunteer. They utilize the historic fire station in Central City for housing their apparatus, but the station is not up to code and cannot be used for housing shift workers. The Department had been using the Apex Building on Apex Road, which has a kitchen, sleeping area, and room for training; however, Gilpin County is reclaiming the use of that building and ending the lease with Central City. This has forced the fire department to store their trucks and other items in the Central City station and two shipping containers. The City is building a “bubble building” for storage which will ease the stress, but the fire fighters have no room for training and cannot staff the station due to code violations. These brave men and woman are responding to calls from their homes and places of work; some coming from miles away, to defend our towns from the ravages of the flames, and to rescue people in distress. Cody Allen is hoping that a proposed tax increase could help the department. Fire Chief Gary Allen said that if the tax goes through, it would not be enough to build a station to fit their needs, but it would go a long way to replacing some of their apparatus more than a quarter century old and it would give them a steady income that might allow payments on a building.

Funding aside, Central City was quick to respond to the call and worked in tandem with Black Hawk Fire and Timberline Fire to rapidly contain and extinguish a blaze deep in wooded territory that could have threatened hundreds of people and structures. Thank you to our men and women in blue bravely running toward trouble!

END_OF_DOCUMENT_TOKEN_TO_BE_REPLACED

Benefitting the county, schools, and much more By Don Ireland   This year marks the 30th anniversary of casinos opening in the former little mining towns of Black Hawk, Central City and Cripple Creek, Colorado. In those early years, smoking was allowed inside ... END_OF_DOCUMENT_TOKEN_TO_BE_REPLACED