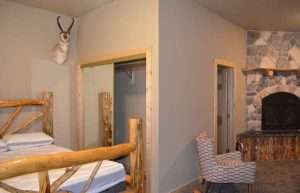 Gilpin County locals, patrons from the metro area, and visitors to Colorado alike are well familiar with Roy’s Last Shot. The iconic restaurant at 17268 Highway 119 is a favorite gathering place where folks meet to eat a great meal, play a game of pool, toss back a drink, or shoot the breeze with friends. Bikers appreciate a large parking area reserved justfor them. The interior décor is delightfully eclectic, the staff attentive, and the glassed-in shelves of over ten thousand shot glasses legendary. Owners Roy and Barb Stewart are warmly regarded for their large hearts, having befriended scores of Gilpin-Nederland residents and hosted countless numbers of fundraisers for folks in need.

Now, to add to the inviting character of the property, Roy and Barb have just added an adjacent bed and breakfast. The idea was actually suggested by customers, some of whom are already waiting for rooms.

“Some of my customers who come up from town asked that we have a place like this,” Roy says. “They may have had a few drinks and don’t want to drive back to town, and they don’t want to go to a casino to stay the night. That’s where I got the idea.”

People visiting the Last Shot may have noticed a small, bright green house just off the restaurant’s patio area. That structure is the new B&B, which will house two rentals, each including a cozy bedroom and stylish bath. The units are intended for couples or singles and are dog friendly, Roy advises.

Locals Jack and Tim Kennedy of Kennedy Custom Design are the contractors. As of mid-May, the final finishing touches were being added to the high-quality interiors. Both quarters are painted and furnished in calming neutral shades. The first lodging displays a rustic mountain style, including a bed with a log headboard and footboard built by Tim Kennedy. Pronghorn mounts provided by former Gilpin Sheriff Bruce Hartman grace the walls (the animal mounts seen in the restaurant are also from Hartman). Bathroom cabinets are crafted of pine with a marble countertop, and the tiled shower features an inset of river rock. The sitting area’s centerpiece is a gas fireplace set with large stones. The second unit has a clean, modern feel, with a black-tiled gas fireplace and comfortable sofa and chair suitable for curling up on with a good book.

Still to come: the front sidewalk will be taken out and an asphalt parking area installed, and an awning will go up over the front door. The building’s central area, which is now used for storage, is being converted to two more rentals, which Roy estimates will be ready by late next fall.

The newly refurbished building was not always planned to accommodate people.

“We moved to Gilpin County 13 years ago and got some Scottish Soay sheep and some chickens,” Roy reports. “We constructed this building eight years ago and first used it for feed and hay storage so we didn’t have to keep going to town for it. We also offered it as a feed store for the locals for a time.”

The building was also used as a grow store. The gentlemen using it as such had all the lights and equipment needed, except the marijuana itself, Roy remarks.

When the Kennedys began the work of converting the place to a B&B, the building was simply a hollow shell. They framed it in and began work last November.

The first guest will be a college student from Regis, who will rent one of the units and work for Roy this summer. Roy notes that the student will also work at the Lincoln Hills private fly fishing club in Gilpin County.

The Stewarts lived and worked in Las Vegas for 21 years before coming to Gilpin County and starting the Last Shot. Roy had been an executive chef at MGM Grand, Harrah’s, and other casinos.

“At Harrah’s, we had six restaurants and two thousand employees,” Roy recalls. “That life was too stressful, so we moved here. Barb’s 93-year-old mother Anna lives just a short ways from the restaurant. We actually both lived in Gilpin twice before.”

No story about Roy’s Last Shot would be complete without an update on the famed shot glass collection.

“I now have more than 10,000. The collection originally started years ago. Whenever I traveled, I’d bring back hats for my employees, and they reciprocated by bringing back shot glasses from their vacations. I got to the point where I had three or four thousand and decided to go for the Guinness Book of World Records.”

Roy kept careful hand-written records of the size, color, and material of each glass. Finally, he had enough shot glasses to contact Guinness, but they told him they wanted the cataloging done on computer. Roy hired people to transfer his written logs to computerized records but finally felt he was paying too much for that and closed the chapter on the Book of World Records.

“Still, every week somebody brings me some shot glasses they brought back from a trip.”

There are many reasons to visit Roy’s Last Shot – the beautiful views, the good food, the unconventional atmosphere, and the “Hi, neighbor!” you are sure to get when you stop in. Now there is one more motivation – your next getaway destination at Roy’s Bed and Breakfast. Give it a try!

END_OF_DOCUMENT_TOKEN_TO_BE_REPLACED

Where the dead get to tell their story By Jaclyn Schrock On Saturday, August 21, the Gilpin Historical Society held their annual Cemetery Crawl. Tickets allowed the shuttle of hundreds of guests from the Teller House parking lot to the Cemetery. Depending on v... END_OF_DOCUMENT_TOKEN_TO_BE_REPLACED

Benefitting the county, schools, and much more By Don Ireland   This year marks the 30th anniversary of casinos opening in the former little mining towns of Black Hawk, Central City and Cripple Creek, Colorado. In those early years, smoking was allowed inside ... END_OF_DOCUMENT_TOKEN_TO_BE_REPLACED