Rogue One is Star Wars at its best 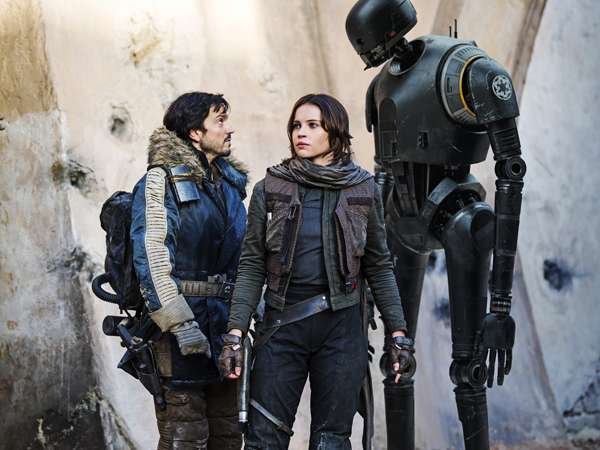 If you have the slightest interaction with media, you know a new Star Wars movie came out. “Rogue One: A Star Wars Story” is an ancillary story to the Star Wars universe that can be enjoyed by fan and newcomer alike. Critics are pleased with it and audiences are raving about it. So, what is making this movie so good?

Rogue One takes place immediately before the events in Star Wars and tells the story of the retrieval of the Death Star plans and the delivery of said plans into the hands of the Rebel Alliance. No surprises about how it turns out, but plenty of good stuff in the journey. Jyn Erso, played by Felicity Jones (The Theory of Everything, The Diary of Anne Frank), is the daughter of the primary engineer of the Death Star, Galen Erso, played by Mads Mikkelson (Casino Royale, Doctor Strange). Jyn’s mother was murdered by a storm trooper and her father forced to work on the Death Star when Jyn was about 10 years old. She was then raised by Saw Gerrera, played by Forest Whitaker (The Last King of Scotland, Phone Booth), a militaristic rebel working outside of the Alliance. The tale truly begins with an adult Jyn frittering away in an Imperial prison under an alias. Being the daughter of Galen, her value as a hostage, ally, or informant, is such that a prison break was executed by the Rebels to get her out of there. Jyn is reluctant to join the Rebels as she has only experienced pain from both sides of the conflict. To “buy” her freedom, she agrees to go on a mission to seek out Saw Gerrera and confirm a rumor that the Empire is building a planet-killer weapon. Together with other victims of conflict, Jyn not only confirms the rumor, but gets caught up in a mission to retrieve a copy of those plans at all costs. It turns out that Jyn’s father, a reluctant helper on the Death Star project, allowed a small and very specific vulnerability in the Death Star that could cripple the weapon.

Unlike the implication of the promotional posters, Jyn’s ragtag group does not share common interests, but for a short time share one common goal; to stop the Empire from completing the Death Star. Jyn wants to find her father and rescue him, but her escort, Cassian, played by Diego Luna (Elysium, The Terminal), has orders to kill Galen on sight to eliminate any risk. This makes for a more interesting story as the conflicting resolutions are played out.

While Jyn believes in the Force, she is not able to use it. Chirrut Imwe, played by Donnie Yen (IP Man, Shanghai Knights), on the other hand, is the kind of Jedi that brings cool to the Jedi name. He is totally blind, but overcomes with the rest of his instincts, and the force. He seems to be a self-taught Jedi with tremendous faith reflected by his mantra, “I am one with the Force; the Force is one with me.” Not one mention of midichlorians – hooray! If we can just forget George Lucas even introduced that idea, it would make the world a better place.

This movie combines some of the best elements of all three original movies into one cohesive film. It doesn’t try to explain everything, like why Jyn is in prison, and focuses only on the necessary. It has a light saber (yep, just one and I will not tell you whose it is, although it is red), space battles, awesome hand-to-hand fighting, subterfuge, high risk, and not all the good guys survive this film. The menace is real. Remember the line from the first movie, “Many Bothans died to bring us this information?”

The movie begins with the classic “A long time ago in a galaxy far, far away…” text on a silent screen followed by… the first image of the movie. You do not hear John Williams’ familiar theme accompanying scrolling text. That’s the first surprise of the movie that tells you this is not quite like the others. Michael Giacchino (Star Trek Beyond, Lost) takes the reigns of music composition and saves that too-familiar-it’s-getting-old theme for the end credits. He wisely strays from Williams’ tunes only reminding us when the occasion deserves.

The droid used for comic relief, K-2SO, voiced by Alan Tudyk (Firefly, A Knight’s Tale), is quite an upgrade to the comic stylings of C-3PO; sophisticated, straight-up humor not relying on childishness. K-2 is more than just a comedian, thought, he (it?) is used for all its intelligent programming skills, too. There is a reason for K-2 to exist. Just as the annoying C-3PO was built by a whiny Anakin Skywalker, K-2 could have been built by Han Solo based on the enjoyment of having him in a scene.

For at least three planets, many shots were filmed “on location” in Iceland, Maldives, and Jordan, giving a real feel to the environment. Sure there was CGI thrown in, too, but not whole planets of CGI like the lazy production of the Star Wars prequels.

The story ended exactly where and how I wanted it to, sending chills down my spine. Not only that, but the story actually ended. There will be no sequels to Rogue One as it should be. This will not spawn an endless franchise tangential to the Star Wars movies and is very enjoyable as a stand-alone film.

I have one complaint: there was one completely unnecessary death. I don’t mind that the character died, but it is that he chose to die instead of trying to survive that made it unbelievable. I suppose you can also say that no Bothans died in this movie. I don’t know what a Bothan is, but the name is never used, so you could call these rebels Bothans if you want to get past the inconsistency.

Rogue One is a very entertaining action flick with substance and depth. It is rated PG-13 for extended sequences of sci-fi violence and action. Other than being a Star Wars story, I would caution taking youngsters; the intended target audience is definitely 13 to adult. I rate the film four and a half out of five ominous shadows and my young adult friend rated it five out of five K-2s.

END_OF_DOCUMENT_TOKEN_TO_BE_REPLACED

Where the dead get to tell their story By Jaclyn Schrock On Saturday, August 21, the Gilpin Historical Society held their annual Cemetery Crawl. Tickets allowed the shuttle of hundreds of guests from the Teller House parking lot to the Cemetery. Depending on v... END_OF_DOCUMENT_TOKEN_TO_BE_REPLACED