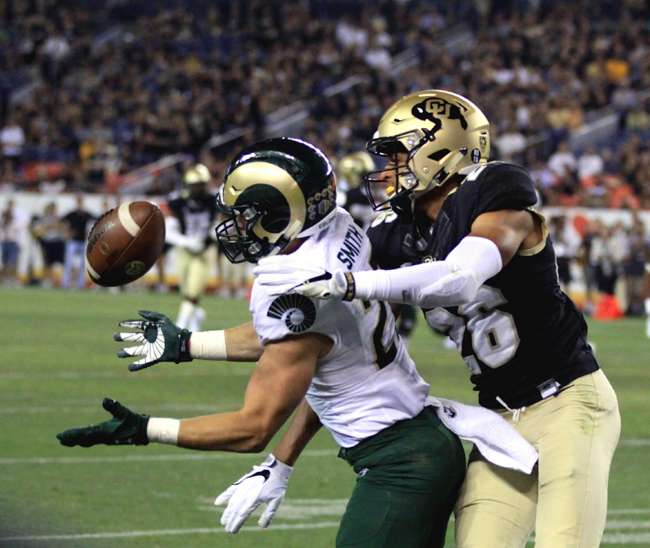 The Colorado University Buffaloes had played the Colorado State University Rams eighty-eight times since 1883 entering last Friday’s football game at Sports Authority Field at Mile High. Billed as the Rocky Mountain Showdown, the Buffaloes hold an all-time 3-to-1 advantage in those meetings and were hoping to win their third in a row against the Rams. CSU entered the game having beat Oregon State 58 to 27 the previous Saturday unveiling a high-powered offense that exploded for 525 yards. Even though the Rams have appeared in bowl games the last four years in a row, experts favored the Pac-12 South Champion Buffs by 3 ½ points.

Loyal fans began tailgating at 2 p.m. and were well fed and/or lubricated by the 6 p.m. start time. To curb rowdiness and hooliganism associated with some of the prior contests, no alcoholic beverages were permitted inside the stadium and none were available for purchase. Students from CSU packed the north end zone seats and CU students the south. Perhaps spurred by alcohol consumption, immaturity, and being on the losing end of seventy-five percent of the games in the rivalry, the north end zone shouted insults to the CU fans before the game even started. The off-color chant wasn’t in any way reflective of respectable Ram alumni and long-time supporters. No retort was noted from the semi-college educated south stands.

All of the loose talk and hoopla leading up to the match-up mattered little when the Buffs won the coin toss and elected to kick off. On the Ram’s first possession, quarterback Nick Stevens connected with Olabisi Johnson to the Buff five-yard line for an apparent first-and-goal. A mysterious offensive pass interference call negated the catch and CSU was unable to get on the board. Halfway through the 1st quarter against a stacked defensive front, CU tailback Phillip Lindsay capped a 6-play, 94-yard drive with a touchdown run of 45 yards. Buffalo coach Mike MacIntyre said of the 2016 Pac-12 rushing touchdown leader Lindsay, “He has just got that extra gear. He’s a little faster, a little stronger (than last season).” Lindsay would finish the day with an average of 7.4 yards per carry while scampering for 140 yards. James Stefanou added a 39-yard field goal to make the score 10-0 CU. At the beginning of the second quarter, sophomore Buff QB Steven Montez was flushed from the pocket. Rolling left and throwing right, he hit a streaking Shay Fields for a score and seventeen unanswered points. CSU mustered a 62-yard drive that resulted in a field goal and were sacked twice to end the half.

The Rams would have their chances in the second portion of the game. A twenty-seven yard touchdown pass to Detrich Clark was disallowed with a debatable pass interference call. Two plays later, a forty-yard TD pass from Stevens to Olabisi Johnson was erased by illegal hands to the face by an offensive lineman. Bedeviled by penalties all night, CSU was whistled ten times for 120 yards to CU’s 59 yards. Later, when a 33-yard reception to the Buff 15-yard line was flagged for pushing off, empty plastic water bottles rained down behind the north end zone. Ram fans’ hopes faded in the expressions painted on their faces. Fervent yet disappointed and subdued, they stayed to the finish. The Rocky Mountain Showdown ended as the first half had – 17 to 3.

Coach Mike MacIntyre said of his victorious team: “Someday, this group will be really explosive. I can’t wait until they get it under their belts and do it. Hopefully it’s next Saturday.” 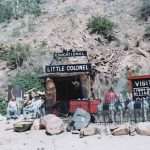 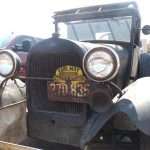