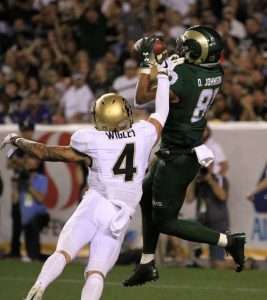 Buffs vs. Rams at Mile High

The CSU Rams knew heading into last Friday night’s game at Mile High Stadium against the CU Buffaloes that winning wouldn’t be easy – and it wasn’t. The Buffs struck early and often in what turned into a rout.

Buffs quarterback Steven Montez was the star of the contest going 22-for-25 while passing for 338 yards and four touchdowns. He also ran one in 38 yards on the Buffs first possession of the game, capping an 84-second 75-yard drive. Montez connected with K.D. Nixon for 46 yards to make the score 14-0. In CSU’s only touchdown of the evening, WR Olabisi Johnson snatched a pass in the end zone from Rams quarterback K. J. Carta-Samuels to bring the Rams within a touchdown. From then on, it was all Buffs. Two consecutive 4-yard TD passes from Montez answered only by a 51-yard field goal to end the half put the score at 28-10 in favor of the Buffaloes.

With 12:41 remaining in the 3rd quarter, QB Montez hooked up with speedster wide receiver Laviska Shenault on a short throw over the middle. After eluding two defenders, he raced 89 yards for another CU score. Shenault would contribute 11 catches for 211 yards to go along with his TD. Tailback Travon McMillian, who rushed for 103 yards on 10 carries and a gaudy 10.3 average, ripped a 49-yard touchdown run down the sideline against a CSU defense that gave up 617 yards the week before in a 43-34 home loss against Hawaii. A field goal by each team would end the scoring with a final score of CU 45, CSU 13.

Buffs quarterback Montez commented about his team: “Our guys have been hungry. They’ve been kind of antsy to get out there on the field. Things just kind of clicked today, and hopefully things click a lot for us this season.”

END_OF_DOCUMENT_TOKEN_TO_BE_REPLACED

Benefitting the county, schools, and much more By Don Ireland   This year marks the 30th anniversary of casinos opening in the former little mining towns of Black Hawk, Central City and Cripple Creek, Colorado. In those early years, smoking was allowed inside ... END_OF_DOCUMENT_TOKEN_TO_BE_REPLACED