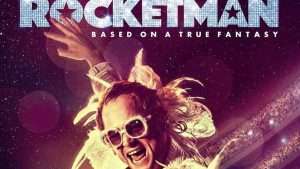 The Redemption of a Musician

Marv Films’ Elton John biopic has hit the theaters with a raw revelation of the popular singer’s rise to fame, fortune, alcohol, drugs, and sex, concluding with his decision to face life as a sober man. The movie is a fantastical musical, liberally using metaphorical visuals to communicate emotions and key points in John’s life.

Reginald Kenneth Dwight is a musical prodigy growing up in a house with a distant father, critical mother, and supportive grandmother, who can replicate on a piano a piece of music he just heard. After the divorce of his parents, his mother allows rock ’n roll records in the house which inspires Reginald to pursue the genre. Dwight’s Achilles heel, writing lyrics, is solved after meeting Bernie Taupin who becomes a life-long friend and symbolic brother. Reggie adopts the stage name Elton Hercules John (his middle name never appears on his albums, but this is how he introduces himself) and launches into immediate fame under the management of Dick James. Early in his career, John is introduced to the movers and shakers of the music industry at numerous parties where he is also introduced to cocaine, endless liquor, and forays into his closeted sexuality. Whether it was the drugs, alcohol, sex, fame, or it was in him all along, his own entitlement led to the firing of his manager in favor of his intimate partner John Reid. It does not take long for the intimate piece of their partnership to sour although Reid continues to “manage” Elton for the money. John rockets into a downward spiral of self-loathing, loneliness, and at least one overdose, and eventually to a place where he chooses to face life without all the trappings fame brought to him and he enters rehabilitation to start his life over.

Metaphorical story-telling. Much of the film is straight-forward “this is the story” of Elton John, but pivotal moments took a break from reality reflecting his drug-induced life. His first appearance on stage in America shows Elton and the audience floating off the ground (revealed in the trailers for the movie) which symbolizes how John felt while playing. The Rocketman song sequence shows him blasting off like a rocket into space symbolizing his complete release of control to drugs. These are two examples director Dexter Fletcher uses which are very well done, seamlessly changing how the story is told in and out of those scenes. Using visual metaphor is a tricky business that leaves an audience confused when it is not executed properly. “Rocketman” executes it perfectly.

Musical. Using almost exclusively Elton John songs, the movie is full-on musical telling pieces of the story through the words, dance, and music. Not unexpectedly, this also means you hear some songs out of the sequence of the timeline.

Singing. Egerton performed all the vocals as did the rest of the cast which keeps the story authentic, but can often lead to an unintentionally embarrassing performance from a performer (Russell Crowe in “Les Misérables” for example). You don’t have to worry about that in “Rocketman.” Egerton’s voice matches the timbre of Elton’s, but has a unique (albeit subtle) country-western twang that Elton never demonstrated on the studio recordings. In the rare moments that other cast members sang, the vocals were on-key.

Editing. There was nothing in the movie’s pacing and transitions that took me out of the story which tells me the editing was done really well. If you don’t notice it, they have done their job.

Costumes. The colorful flamboyance of Elton John was magnificently reflected in the costuming. During the end-credits, they reveal that most of the outfits were duplicated from Elton’s career.

Length. The movie clocked in at just over two hours, but it is actually the length of the story itself that is good. This is a tale in two acts which I believe works well. The screenwriters avoided the seemingly obligatory third act showing the main character’s phoenix rising back to stardom. The climb back to where you want to be can be filled with struggle and good story-telling, but we already know it happened and we know it was not easy. Leaving part of the story to the audience’s imagination is a good thing.

Tone. The tone of the movie thwarted my expectations. I know going into the theater that this was a musical and for me, musicals bring joy and happiness with periods of conflict and tension, but “Rocketman” did not have the joy I was expecting. This is truly my problem, but I don’t want it to be anyone else’s issue with the movie. If you think about Elton’s songs, most of them are not happy stories, so I should not have been surprised; however, I was and so my enjoyment was lessoned although it should not have been that way.

“Rocketman” is a wonderful telling of most of Elton John’s life and is not afraid to be harshly truthful about his experiences. This is not like “Bohemian Rhapsody” that approached Freddy’s complexities without truly diving into them; rather, this is an in-your-face biography of the man. It is rated R for language throughout, some drug use, and sexual content. I think the movie barely makes the R rating (my daughter asked why it was rated R instead of PG-13), but is absolutely not appropriate for children. It manages to show the drug use without glamorizing it; but it does establish drugs as a normal way of life for the rock industry of that time. Elton ends up redeeming himself from his poor choices, but the reasons he made the decision are not as clear as they could be. If you are looking for a fun, adult musical, this is not it. The movie gets bonus points, though, for taking me on his journey to the point that his choice to sober up brought me to tears. I am a fan of Elton’s music, so it is difficult for me to review the film from the other side, but for fans of Elton John, this is a very good biographical movie of his life. My awesome adult-daughter rates the film four out of five flashlight director’s wands and I rate the film four out of five C-Major scales.

END_OF_DOCUMENT_TOKEN_TO_BE_REPLACED

Where the dead get to tell their story By Jaclyn Schrock On Saturday, August 21, the Gilpin Historical Society held their annual Cemetery Crawl. Tickets allowed the shuttle of hundreds of guests from the Teller House parking lot to the Cemetery. Depending on v... END_OF_DOCUMENT_TOKEN_TO_BE_REPLACED