“Risen” film rises above the mediocrity of Christian movies 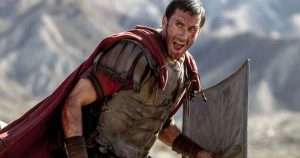 “Risen” is an unabashedly Christian movie with an intended Christian, or at least curious about the faith, audience. As many Christians can tell you, much of what is produced in Christian entertainment is low on the scale of budget, acting, editing, and screenplay; and it is produced solely for the intent of sermonizing or proselytizing. I am very glad to say that “Risen” is not such a movie. It was directed and co-written by Kevin Reynolds who is known for directing Kevin Costner in the not so major hits “Robin Hood Prince of Thieves” and “Waterworld.” Perhaps those big-budget films were too large for Reynolds (at the time) and where Kevin truly shines is the small budget art film. “Risen” feels like an art film that one would see at the Sundance Film Festival. “Risen’s” budget is 20 million – a paltry sum compared to the billion-dollar price tags we’re starting to see on today’s CGI heavy movies. With a smaller budget you won’t see great special effects or top name actors, but you will see great acting and a fantastic story concept.

Most people, regardless of belief system, have a decent understanding of the Biblical telling of Jesus Christ, his execution, and his resurrection, and there have been many movies rehashing the same story. “Risen” takes a unique perspective from the Roman side of things. Told through the eyes of a Mars-worshipping tribune named Clavius, played by Joseph Fiennes (“Enemy at the Gates,” “Elizabeth,” “Shakespeare in Love”), who was favored by Pontius Pilate, played by Peter Firth (“MI-5,” “Pearl Harbor,” “The Hunt for Red October”). Clavius is called back from battle to help quell the tensions brought about from the trial of Jesus which brings Clavius to the infamous cross precisely after Jesus dies. It is Clavius that orders the quick deaths of the adjacent criminals by breaking their legs, and orders Jesus to be impaled by a spear to ensure he was already dead. It is Clavius who is responsible for the guards at the tomb and it is he that orders it sealed on behalf of Pilate. And it is Clavius who investigates the disappearance of Jesus’ body from the tomb.

The investigation brings up more questions than answers; from inconsistent stories between the guards and the Sanhedrin to how a local prostitute could be involved. The more Clavius searches, the less evidence he finds that the body was stolen. Ultimately, on a raid to find the remaining eleven disciples, Clavius stumbles into an upper room where the disciples, along with several women, were seated around a “Risen” Christ. Clavius is now confronted with the dissolution of his belief in the Roman gods and the unequivocal evidence that Jesus is God. He must choose what to do about this revelation.

I have never seen this story told from a Roman perspective and this makes for a fresh and intriguing approach. Although low-budget, they took pains to depict ancient Roman traditions, beliefs, architecture, and items. Clavius is shown praying to an alter dedicated to Mars and leaving coins behind. Clavius places a coin in a dead man’s mouth for payment to the ferryman. The Romans believed, similar to the Greeks, that after you die, you must cross the river Styx via a boat captained by Charon. You paid Charon to take the body across to the realm of Pluto (Hades for the Greeks). There is a battle showing fairly accurate Roman fighting techniques and how the Roman shields played so much into their successful battles. A bathhouse showed an unnamed statue averting his eyes (Neptune, perhaps). The bathing males wore loincloths; not historically accurate, but appreciated as depiction of nudity is unnecessary in this film and would be a distraction from the plot rather than something to advance the plot.

This is the first depiction of the disciples I’ve seen that portray them more than just grim followers hanging on to every word Jesus spoke. Instead, this group felt human and several exhibited boyish enthusiasms for what was happening around them bringing vitality to many times dead storytelling in other Biblical movies. Bartholomew, played by Stephen Hagan (“Stan Lee’s Lucky Man,” “A Royal Christmas,” “Shooting for Socrates”) in particular steals the scene anytime he has lines.

The movie felt slow in a couple of places where the pacing could have been better. The story arc was that of Clavius and his journey from believer in the Roman gods to believing in something else, but there were at least two times when the movie could have ended with the story being finished. There was more to Clavius’ journey, though, and I blame the editing and screenplay for not giving the audience something to grasp onto and want to know what happens next.

Low-budget or not, this film cannot get away with the special effects it gave us and not be put to shame. There was very little cause to use special effects or CGI, but when it did, well, remember the 70s? Fortunately, they were brief and did not detract from the story for long.

This movie is rated PG-13 for violence and disturbing images. Many people die in battle; the crucifixion scene is cringe-inducing, and the body dump is extremely unpleasant. Parents be warned, this movie is not for children, although most teenagers would be fine. You see men’s bodies other than what a loincloth can cover, but there are no sensuous or sexual scenes.

Clavius’ second is a recent transfer to the unit named Lucius, played by Tom Felton. You may recognize that name as the actor who portrayed Harry Potter’s nemesis Draco Malfoy. Draco’s father’s name is Lucius, so Tom Felton has come full circle, so to speak. Felton’s Lucius ultimately betrays Clavius in his own ambition to rise to power.

“Risen” never uses the name Jesus, instead, they choose to use the alternate pronunciation of Yeshua. The name Jesus is the English transliteration of the Greek word for Jesus, which is closer to Yeshua. Some believe that Yeshua is a name used by close friends and family and Jesus is the more formal name.

Joseph Fiennes’ brother, also known for Harry Potter’s Ralph Fiennes, played Jesus in another movie. Of course, this one was a Claymation children’s movie called Miracle Maker,” but being cast as Jesus must count, even if it’s only for your voice.

“Risen” is an excellent and well-done Christian movie. The intended audience is for Christians, although those of other faiths (or none), may be entertained by the story. My rating gets knocked down for those unsure endings and slow moments and I give it four out of five baths with Pilate. My lovely wife rates it four and a half out of five days without death.

END_OF_DOCUMENT_TOKEN_TO_BE_REPLACED

Benefitting the county, schools, and much more By Don Ireland   This year marks the 30th anniversary of casinos opening in the former little mining towns of Black Hawk, Central City and Cripple Creek, Colorado. In those early years, smoking was allowed inside ... END_OF_DOCUMENT_TOKEN_TO_BE_REPLACED