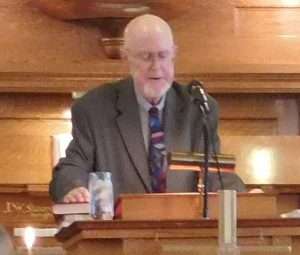 On Sunday, June 30, 2019, Reverend Dick Vickery will preach his final message at St. James Methodist Church in Central City. Vickery, who holds a Doctor of Theology, is hanging up his preaching tie to retire to a peaceful life at home near Evergreen. He has been ministering to his flock in Central City for the past nine years continually urging them to go out into the world and love people. Time has not been a friend for the Reverend and his health has determined that now is the time to leave the pulpit. “I can no longer give the people of St. James the attention they deserve,” Vickery sadly admits.

Dick Vickery grew up in Hatboro, Pennsylvania, a small hamlet famous for haberdashers of hats for the men in the Revolutionary War that sits sixteen miles northeast of Philadelphia. Vickery went to college to be a history professor, but after he and five classmates traveled to Salt Lake City to be interns, he fell in love with ministry and switched the direction of his future to theology, becoming an ordained reverend in the United Methodist Church in 1965. He was assigned to pastor several churches in his lifetime, eventually landing in Central City in 2010. As a reverend, Vickery said, “I am set aside to lead in worship, preaching, and the study of God’s Word; set aside.” (The word holy means to be set apart.)

In consideration of the future of the United Methodist Church, Reverend Vickery voiced his opinion regarding a recent proposal by the Council of Bishops on full communion with the Episcopal Church. “Methodism is undergoing a major schism around same sex issues,” said Vickery, “and I am guessing a new denomination will emerge.” He commented that the legislative body of the United Methodists “has gone toward a very punitive position” for members of the LGBTQ community.

Reverend Vickery may be directing his church to go into the world and help people, but he also puts action into his words. “My involvements in Gilpin County are most rewarding,” said Vickery. He is in or has been a part of the Peak to Peak Rotarians, the Salvation Army, the Gilpin County Education Foundation, and is co-chair for the District Accountability Committee for Gilpin Schools.

Reflecting on the people of St. James Methodist in Central City, Reverend Vickery had nothing but praise. “They are some of the warmest, most hospitable people I have ever encountered. Very generous and accepting. The folks are just great!” he exclaimed. Though leaving his congregation may be sweet sorrow, he is looking forward to the next chapter of his life. He said, “I am very blessed with a number of dogs, a sheep, and a goat.” All of Vickery’s furry friends are rescue animals. When asked what he hopes to do next, Vickery responded, “Just being at home. I look forward to a Christmas where I can send out some cards and do some Christmas baking. And I want to expand my livestock; maybe some chickens.”

A retirement party and farewell potluck will be held at St. James Methodist Church in Central City on Sunday, June 23rd immediately following the service. The party, starting around 11:00 a.m., is open to the community and all are welcome.

END_OF_DOCUMENT_TOKEN_TO_BE_REPLACED

Where the dead get to tell their story By Jaclyn Schrock On Saturday, August 21, the Gilpin Historical Society held their annual Cemetery Crawl. Tickets allowed the shuttle of hundreds of guests from the Teller House parking lot to the Cemetery. Depending on v... END_OF_DOCUMENT_TOKEN_TO_BE_REPLACED

Where the dead get to tell their story By Jaclyn Schrock On Saturday, August 21, the Gilpin Historical Society held their annual Cemetery Crawl. Tickets allowed the shuttle of hundreds of guests from the Teller House parking lot to the Cemetery. Depending on v... END_OF_DOCUMENT_TOKEN_TO_BE_REPLACED