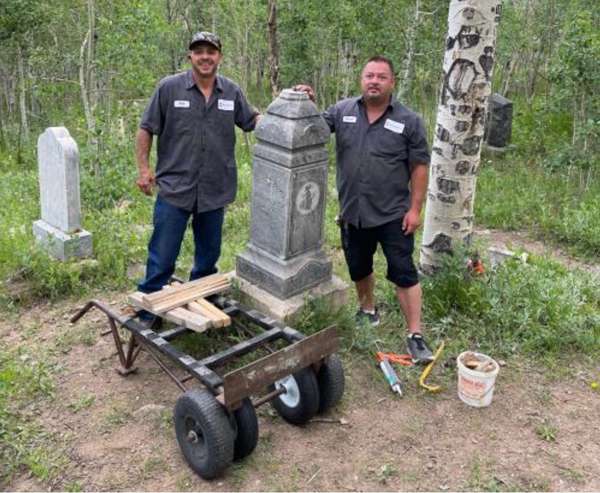 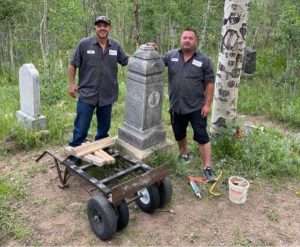 Theft from cemeteries has been a problem for decades. People steal floral arrangements for decorative purposes, vases for scrap metal, and even headstones and statues to put in their back yards. Gilpin County’s cemeteries have not been immune to this problem. One of the more notable thefts involved the grave of Mattie Mosch. When she died in 1967 her headstone at the IOOF Cemetery above Central City included a bust of the famous singer. It was stolen soon after and despite the promise of a hefty reward, it was never returned.

In the late 1980s and early 1990s vandals stole several headstones from county cemeteries and dumped them on county roads afterwards. The police recovered the headstones, but with no cemetery records widely available at the time, they had no choice but to store them instead of returning them to their rightful places. In the early 1990s, with the cases closed due to lack of evidence, seven headstones were entrusted to the Gilpin Historical Society for safekeeping. Since then, they have been stored either in the museum or the Coeur d’Alene Mine Shaft House.

Thanks to the internet and genealogical societies, however, more and more cemetery records are becoming available online. The historical society has also been working hard for several years to collect as many records for Gilpin County’s cemeteries as possible. Due to these efforts, two of the headstones stored by the historical society have been returned to their proper location.

The first headstone reinstalled was the base of the stone marking the graves of Andrew Hohn and Charles Schelein, who both died on August 18, 1887, in the Knights of Pythias Cemetery. The two men were working the late shift at the Bobtail Mine in Black Hawk, running one of the air drills. They had completed drilling their holes, but the man running the other drill, Russell Crosley, was finishing his last hole when he hit some unexploded powder from the previous shift. The impact from the drill caused the powder to explode. The blast injured Crosley and Joe McCune, who was thrown against a wall of the mine “as if nothing more than a pipe stem.” Hohn and Schelein were bending down to pick up their drill and carry it out of the incline when the explosion happened, throwing them into each other and covering them with rock, killing them instantly. According to the Weekly Register-Call, both men were badly cut by flying rock, had their arms and legs broken, and the impact forced their eyeballs from their sockets.

In addition to mining, Hohn was also the foreman of the Black Hawk Hose Company, and had previously driven the quartz team for Schindelmeyer and Hartman in Black Hawk. He left behind two sisters and a brother. Charles Schelein, who lived near the Bull’s Head Corral, left behind a wife and daughter. Both were members of the Knights of Pythias Black Hawk Lodge No. 4, which handled their funerals. In addition to friends and relatives, the service was attended by their fellow lodge members and the members of the Black Hawk Hose Company. Afterwards they were buried side by side at the Knights of Pythias Cemetery above Central City and a large headstone erected above their graves. In the 1980s vandals stole the middle part of the headstone, which had the names Hohn and Schelein engraved on it, in addition to the finial on top of it. They left the large base and upright part of the stone.

The second headstone reinstalled belonged to Cecelie Weisbeck, who was part of a large Irish family that lived in Nevadaville. She died in Nevadaville on February 9, 1895 at the age of 5 from croup. After her funeral at St. Mary’s Catholic Church, Cecelie was buried in what would become the family plot in the Catholic Cemetery above Central City. The following year her mother Katie died, and her younger brother Joseph died in 1905, and both were buried next to her. Cecelie’s father, George, died in Craig, Colorado in the 1920s and is possibly buried in an unmarked grave next to Katie, but cemetery records are unclear. The remaining Weisbeck children were buried in different cemeteries in Colorado and Arizona when they died. Vandals stole Cecelie’s headstone, but left the base of the stone as well as her footstone in place.

After the historical society determined where the two headstones belonged, they contacted Norman’s Memorials in Wheat Ridge to arrange the reinstallation. On July 13, 2021, Rob and Frank from the Greeley office of Norman’s Memorials picked up the two headstones and headed up to the cemeteries to reinstall them. Using a combination of grout (the same kind used to repair Mt. Rushmore) and putty, they first reinstalled the middle part of the Schelein and Hohn stone at the Knights of Pythias Cemetery, and then reset the upright piece on top of it. They then went to the Catholic Cemetery where they leveled out the base for Cecelie Weisbeck’s headstone and then reinstalled the stone. The end result of their work was two headstones back where they belong and hopefully not going anywhere again.

Among the remaining headstones still stored at the museum, we know that the headstone for Sarah Irving belongs in the City Cemetery and Harry Barber’s mostly likely belongs in the Russell Gulch IOOF Cemetery. But no bases matching the stones have yet been found so they cannot be reinstalled in their proper location at this time. Minnie Belle Strock was buried in Black Hawk but not in a cemetery, so once her stone was moved the location was lost. Her parents, David and Mary, and sisters Jennie and Mary, are buried at Orchard Mesa Cemetery in Grand Junction. A headstone for two children is only a large fragment of the stone with two first names but no last names, while the seventh stone is a footstone. We remain hopeful that more of these headstone will be reinstalled one day and that vandals will think twice before taking any more headstones from Gilpin County’s cemeteries. 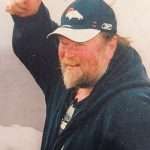 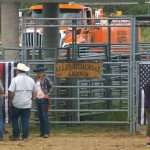