Return to victory for Lady Eagles 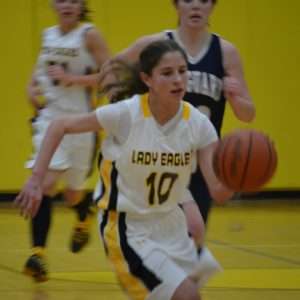 The Gilpin County School varsity girls’ basketball team scored another win at home January 25 against opponent Community Christian. The Lady Eagles shut down the Crusaders 54-10 in conference play. The team’s record stands at 11-2, and the wins of the past week are welcome after losing to Vanguard on January 19.

Gilpin missed players Andromeda Ramsey and Stephanie Siegrist, who were out with injuries from the Vanguard game, but their teammates rose to the occasion.

Gilpin snatched a total of 45 rebounds, had 18 steals, and 18 assists to clinch the win.

Denver Waldorf had issues getting points on the board against the Eagles during the January 22 league match. Eagles routed the Spartans 55-17, racking up 38 points in the first half, while Denver remained scoreless. Both teams made 17 points in the second half.

Peterson again led the Eagles with 12 points, followed closely by Barr with 10. Randall and Cortez each chipped in with seven points. Delainey Lepro, Grace Diekman, and Katura Sales contributed six, five, and four points, respectively. Chareunsouk and Maria Garcia added two apiece. Although most of the scoring came through two-point field goals, Cortez and Randall did each manage a three-point field goal. Diekman plunked in a free throw for good measure.

END_OF_DOCUMENT_TOKEN_TO_BE_REPLACED

Benefitting the county, schools, and much more By Don Ireland   This year marks the 30th anniversary of casinos opening in the former little mining towns of Black Hawk, Central City and Cripple Creek, Colorado. In those early years, smoking was allowed inside ... END_OF_DOCUMENT_TOKEN_TO_BE_REPLACED