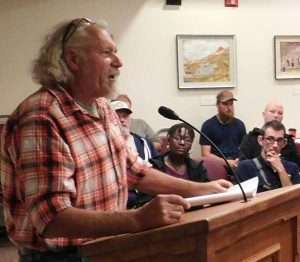 The Mayor called for a motion to approve the consent agenda which consisted of the minutes from the August 7 meeting, regular bill lists through August 7, and ratification of HR 18-06 for new construction of a single-family structure on Eureka Street. The Historic Preservation Commission has awarded a Certificate of Appropriateness to applicant Stephen Shores. Alderwoman Laratta moved to approve the Consent Agenda and was seconded by Alderwoman Bell. The motion passed unanimously.

City Attorney McAskin reviewed the second reading of Ordinance 18-08 which would approve the inclusion of certain property into the boundaries of the Central City Business Improvement District (BID). The purpose of this Ordinance is to temporarily include City owned property into the BID so that they can be excluded using better and more specific language regarding inclusion should the City sell or lease the property to a business owner.

Mayor Heider opened the public hearing for Ordinance 18-08; but no one chose to speak on the matter.

City Attorney McAskin reviewed the second reading of Ordinance 18-09 which would approve the exclusion of certain property from the boundaries of the Central City Business Improvement District (BID).

Mayor Heider opened the public hearing for Ordinance 18-09; but no one chose to speak on the matter.

Alderman Aiken moved to approve Ordinance 18-09 and was seconded by Alderwoman Voorhies. The Ordinance passed unanimously.

Manager Miera introduced Resolution 18-21 which would appoint the Municipal Judge and set the term and compensation for the service.

Two judges are in consideration, Louis A. Gresh and Jack W. Berryhill. Compensation for the judge is $700 per month when court is in session (every other month) or $4,200 for the year. The Honorable David R. Gloss resigned as Municipal Judge for the City of Central and the Council had a work session on Monday, August 13 to meet with the two candidates. The new candidate will assume the position on September 1, 2018.

Alderman Aiken moved to approve Resolution 18-21 to appoint Jack Berryhill as Municipal Judge and was seconded by Alderwoman Bell. Mayor Heider commented that she is in favor of Berryhill and has worked with him in Jefferson County. The Resolution passed unanimously.

Attorney McAskin introduced the first reading of Ordinance 18-10 which would approve a long-term lease between the City of Central and the Central City Building Authority concerning the Belvidere Theatre. The Building Authority would be eligible for grants and tax breaks that the City would not be. Since the terms of the lease would be more than one year, the City is required to approve through an Ordinance.

Alderwoman Voorhies moved to approve Ordinance 18-10 and set the second reading and public hearing for Tuesday, September 18 (this is the second meeting after tonight), and was seconded by Alderman Aiken. The motion passed unanimously.

Manager Miera reported that there was a gas leak last Tuesday across the street from City Hall next to the Sauer McShane building. Emergency personnel responded quickly, and Xcel Energy was in the area and pitched in. The matter was taken care of expediently and traffic was diverted meanwhile.

Alderman Aiken inquired about the timeline on chip sealing Spring Street. Manager Miera responded that they are still working out the particulars of the project and due to a change order, it was postponed to 2019. Meanwhile, they will put a seal coat on the cracks and fill potholes before the winter months. There will be some traffic delays during the sealing process, but the street will not close.

Alderwoman Voorhies commented that starting next Sunday, August 26, westbound I-70 will close for bridge repair around mile marker 244. Traffic will be diverted on exit 244 to US 6, and then reenter the Interstate from the Highway 6 merge lane.

Mayor Heider opened the floor to the public for anyone who wished to speak to the council on any items not on the agenda. Five people chose to address the Council.

Jeremy Fey first addressed the Council representing the Gilpin County Arts Association (GCAA). Fey reported that there are three events coming up either hosted by the GCAA or by partnering with other organizations. On Saturday, September 8, the GCAA is holding its annual fundraiser party. This year will be a “50/100” event in which every ticket you buy for either $50 or $100 will get you a work of art valued at least that much, and there will be live music and a cash bar. Fey publicly thanked the gallery manager, Michele Roussel and all the other folks who have put this together. The GCAA will be participating in a joint team for the 9/11 Stair Climb at the Ameristar. Finally, the GCAA is partnering with Central City Opera to host a Firefighter’s Ball at the Teller House on December 8.

Russel Gulch resident Diane Sherlock next addressed the Council. Sherlock reported that she has been doing some sleuthing about rock and dirt work being done behind the salt shed on City owned property. She said the project has been going on ten years and it has caused unnecessary noise and pollution. Manager Miera informed the Council that City Staff has been made aware of the issue and has done some investigating. Although the property is behind City owned property, it is Gilpin County jurisdiction. The property owner has a permit for the work and there was a code enforcement issue that has since been resolved.

Resident Tim Casey next addressed the Council. “I have seen many historic buildings up here continue to deteriorate and am wondering why this is happening,” said Casey. He reported that there is a City building falling apart by the maintenance building up on Eureka that is in bad shape. “I would offer some volunteer labor if it would help get that building closed up and improved.”

Central City Volunteer Firefighter Wayne Butler next addressed the Council regarding the draft proposal for a new tax. Butler is concerned about the wording of the use of the taxed money being for “maintaining and improving the delivery of emergency fire, medical, rescue and other public safety services;” in particular the “other safety services.” Butler questioned whether the generalized language could mean the tax money could be used by the City for items or events outside the scope of emergency services such as a rockfall on the Parkway. Manager Miera spoke up and said that while Public Forum is not usually a place for question and answer, he felt the issue important to address immediately. Miera stated that they carefully crafted the wording so that money could be used for non-fire related services provided by the fire department or Gilpin Ambulance such as equipment and structures used by emergency personnel. Miera also said that the draft can still be changed and the language is not final. The Council will need to accept the draft at a future meeting.

Lastly, Jackie Mitchel, resident on Bates Hill Road, addressed the Council. Mitchell thanked the City and Staff for helping her feel “safe for the first time” during the Fourth of July Fireworks show. She described how public works staff were up there for a week setting up sprinklers and clearing brush, and how Central City and Black Hawk fire departments were vigilantly inspecting the grounds; “It was amazing!”

Mayor Heider adjourned the regular meeting at 7:50 pm. The next regular Council Meeting will be Tuesday, September 4, 2018.

END_OF_DOCUMENT_TOKEN_TO_BE_REPLACED

Where the dead get to tell their story By Jaclyn Schrock On Saturday, August 21, the Gilpin Historical Society held their annual Cemetery Crawl. Tickets allowed the shuttle of hundreds of guests from the Teller House parking lot to the Cemetery. Depending on v... END_OF_DOCUMENT_TOKEN_TO_BE_REPLACED

Where the dead get to tell their story By Jaclyn Schrock On Saturday, August 21, the Gilpin Historical Society held their annual Cemetery Crawl. Tickets allowed the shuttle of hundreds of guests from the Teller House parking lot to the Cemetery. Depending on v... END_OF_DOCUMENT_TOKEN_TO_BE_REPLACED