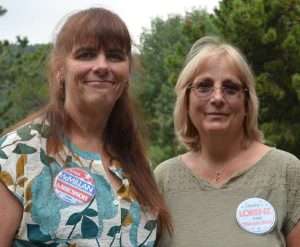 Lorenz for treasurer; McMillan for assessor

Gilpin County Republicans held an informal get-together at the home of Gary and Alynn Huffman on Sunday afternoon, July 22, to introduce their party’s candidates for Gilpin County Treasurer and Gilpin County Assessor. Refreshments were provided as neighbors and colleagues met to discuss the candidates’ experience and goals.

Mary Lorenz is running for treasurer, the office currently held by Alynn Huffman. Huffman will be retiring after serving in that position for the past 25 years. Daurice McMillan is in the race for assessor; the incumbent is Anne Schafer.

Lorenz has 16 years of experience in the treasurer’s office, 15 of those as chief deputy. She has over 25 years of financial experience and has been an active leader in many Gilpin County organizations.

McMillan worked in the assessor’s office as chief deputy assessor from 2004 to 2015 and has served in the treasurer’s office for the past couple of years.

This reporter asked the candidates a number of questions.

First, what is the financial status of Gilpin County, as the candidates see it?

“Gilpin’s financial position is fair, but we are not in a position to spend money on extra projects,” McMillan responded. “The county has no funds for non-essentials – for example, there has been talk of a potential historic park in the Rollinsville area, but that won’t be happening right now.”

Gaming and property taxes are currently the county’s only source of revenue, and McMillan feels that no definitive financial remedy is available at the present time. Various possibilities have been mulled over, such as a sales tax on items sold at Taggert’s convenience store and Base Camp Campground, or on marijuana grows.

“However, I don’t think there are any potential legal grows in the county right now,” she said. “I don’t know how the county can bring in more money except through more taxes.”

The two candidates explained that according to TABOR (Taxpayer Bill of Rights), the people must vote for any tax increase, which is not a likely ballot item this November.

As for adding services, McMillan commented, “We are a bedroom community and go to the metro area for services like doctors and groceries. People don’t want more commercial growth here.”

Would the candidates do anything differently than what their offices are presently doing?

McMillan noted that she began in the assessor’s office in 2004 as chief deputy assessor, performing that job for 12 years and actually doing what an assessor should be doing. She said she wanted a better job to be done by the assessor, including taking more of an active role in that office and mentoring employees who may come to her for help.

“I really value the people in that office,” she affirmed.

Lorenz brought up the point that changes are not always possible, as both the treasurer’s and assessor’s offices are governed by state statute and county policy.

“We can’t make promises about what we’ll do when we get in office,” she advised. “Everything is done by state mandate and follows the state constitution.”

She said she would continue to upgrade technology, which the treasurer’s office has been working hard on for the past four years whenever the Gilpin County Commissioners have been able to fund upgrades.

Lorenz gave the good news that about 96 percent of residents are getting their taxes paid, and the treasurer’s office has sent out the fewest delinquent notices this year at around 950. Some of those are due to property being owned by a person who is now deceased, and perhaps no one else in their family even knew about the property. Additionally, job loss or other unforeseen circumstances can happen to anyone.

“I would continue our policy to work with the taxpayers who are behind in their taxes,” Lorenz said. “We have monthly payment plans, and people appreciate that somebody cares.”

The treasurer’s and assessor’s offices work very closely together, and both Lorenz and McMillan would like to facilitate the communication between the two offices. They also felt it was important to build better relationships with Gilpin taxpayers by providing personal, caring service.

David Kurronen, the chief appraiser of the assessor’s office, was present and added his support for McMillan.

“I look for an improvement in leadership, an improved line of communication between the departments, including community development, the clerk’s office, and the treasurer’s office on tax sales and collections.”

Kurronen noted that some frustration exists on the part of employees in the assessor’s office and said, “It would be nice to know you could get an educated answer and have someone with the willingness to work with you. For example, we changed our software in 2007, and there were lots of bugs. Daurice was our ‘go to’ person for help. We are going through the same thing now. I’m don’t live or vote here – I’m from Jeffco – but I’m concerned about the knowledge base and why the staff supports who they support.”

The candidates next addressed the staffing needs of their offices. Both agreed that the staffing was “pretty right on” for the courthouse offices but were unsure about others, such as Parks and Recreation.

McMillan and Lorenz discussed what they expect in the way of growth in Gilpin County, McMillan stating that she believes Gilpin will keep growing.

“The number of [building] permits has increased, but when the market softens in the Front Range, things decrease up here.”

She explained that she also brings to her job things that she hears in the community, such as a business possibly closing, to help inform her work.

“Daurice is tuned into what the market is doing,” Kurronen said, and Lorenz added, “The official needs to know and to be there.”

This reporter turned the discussion to Gilpin’s Republican party in general, asking if there was a plan to make the Republicans more of a presence in Gilpin and to encourage constituents to vote in November. Republicans made gains nationally in the 2016 elections, but did not come out on top in Gilpin County.

The candidates and others present noted that there was to be a website coming, but so far there have been difficulties with getting it up and running. Although advertising can be difficult in Gilpin, social media was seen as a boon. All seemed in agreement that Republicans need to get out and vote, especially with a big statewide governor’s race coming.

“I’ve been talking to a lot of people who say they don’t vote unless there is a presidential election,” McMillan said. “It’s important that everyone get educated on the candidates and realize that every voice will be heard. I agree that Gilpin’s Republican presence needs to be more.”

The suggestion was also made about having all candidates, regardless of party affiliation, visit the Gilpin County Senior Citizens’ group and the Rotarians to introduce themselves and field any questions. Some commented that it would be good for the candidates to have a debate, but the Republican and Democrat parties have not yet been able to agree on a moderator.

Gary Huffman voiced the group’s general consensus that party affiliation was not as important as the individual doing the job in the treasurer’s or assessor’s offices.

“There are no ‘Republican’ or ‘Democrat’ decisions; the state statute is the driving force. The bottom line is, who will do the best job? Their party doesn’t matter.”

END_OF_DOCUMENT_TOKEN_TO_BE_REPLACED

Where the dead get to tell their story By Jaclyn Schrock On Saturday, August 21, the Gilpin Historical Society held their annual Cemetery Crawl. Tickets allowed the shuttle of hundreds of guests from the Teller House parking lot to the Cemetery. Depending on v... END_OF_DOCUMENT_TOKEN_TO_BE_REPLACED

Where the dead get to tell their story By Jaclyn Schrock On Saturday, August 21, the Gilpin Historical Society held their annual Cemetery Crawl. Tickets allowed the shuttle of hundreds of guests from the Teller House parking lot to the Cemetery. Depending on v... END_OF_DOCUMENT_TOKEN_TO_BE_REPLACED