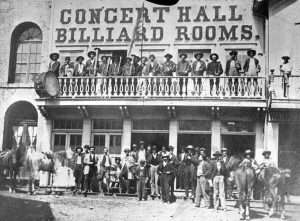 Many stories have been written about the renowned miner Patrick D. Casey, whose career in the mining district (Central City, Nevadaville, and Black Hawk), lasted just a few years. The stories below depict the candor and grit that Casey brought with him from New York, which led to his success and notoriety. Presented below are the works of three authors and an early Central City Daily Register newspaper article. The writers focus on different aspects of Casey’s arrival, his accomplishments, and anecdotal stories. The first three writers have different outcomes for Casey’s life after he left the mining district. The Central City Daily Register article has a famous story of Pat Casey’s “night hands.” They were laborers, mostly miners, who worked for Pat Casey and worked the night shift. The final author, Louis J. Carter, focuses on Pat Casey’s lasting contribution to Central City, which is the road he built to take ore from his mines, to his mill in Black Hawk. The road would become known as “the Casey,” where the finest houses in Central City would be built.

Poet Laureate and historian Alice Polk Hill writes: Many amusing stories are told of that early gold excitement. It is related of a prospector from the Emerald Isle, whom we will designate as Pat, that while attending a funeral, he picked up some dirt that was thrown from the new grave, and just from force of habit examined it. He suddenly arose from his knees and commenced staking of a claim. The minister observed this, and concluded his prayer in this manner: “Stake me off a claim Pat, this we ask for Christ’s sake—Amen.” Pat afterwards became one of the bonanza kings of the period; exchanged his suit made from flour sacks and labelled “superfine flour,” for broadcloth and went to New York to cut a swell. He stopped at the largest most fashionable hotel, and was assigned a room on the fifth floor. When he left his room that evening for a saunter in the city, thinking the halls and stairways rather bewildering, he blazed a way, in order to be able to retrace his steps. It cost him $2,000 for repairs.

According to, Edward Bliss, an early editor of the Rocky Mountain News newspaper: Numerous instances might be cited where men who arrived in the gold regions of Colorado without a dollar, have, in the course of three years, become possessed of small fortunes. The case of Mr. P. D. Casey is so familiar to all who are acquainted to the history of Colorado, and can be so readily substantiated, that a statement in reference to it will undoubtedly prove interesting to the reader. Seven years ago, Mr. Casey landed at Castle Garden, in New York City, from an emigrant ship from Ireland. Like the great majority of emigrants, he possessed little or no means, and was compelled at once to seek daily labor. For two or three years he gained only that comfortable livelihood which in America always rewards honest toil, and soon after the discovery of gold in Colorado, he repaired thither to better his condition. On arrival in the gold regions he had not a dollar in money, and was in debt to parties with whom he journeyed across the plains. But he had energy and industry to aid him, and immediately went to work with a will. In less than three years he owned some of the most valuable mines in the country, and employed upwards of one hundred men to work them. His mill property too, was very valuable, and he made money rapidly. Last August, of 1864, he came to New-York, sold out his property in Colorado to New York capitalists, and realized some fifty thousand dollars, after paying liberal commissions to parties who had assisted him in his negotiations. Mr. Casey is now living in New York, drives one of the finest “turn-outs” in the city, and is prosecuting a successful business in stock and gold speculations.

An old acquaintance meeting this redoubtable gentleman on the street one day, stuck out his hand, saying “Hello Pat, how do you do?” A frown creasing his brow, Casey looked at him severely an instant, then said, “P. D. Casey, Esquire, sur, P. D. Casey, Esquire.”

During the spring of 1863, Langrishe & Dougherty were giving theatrical entertainments at the Montana Theatre, which they had recently purchased of the builder, Geo. Harrison. A play which was to include a song by Mike Dougherty, the comedian of the troupe, entitled “Pat Casey’s Night Hands,” had been several days liberally advertised as the great coming event of the season, and as a natural consequence, excited universal interest. Casey heard of it, of course, considering it a base attempt to destroy his standing as a business man and capitalist, took immediate measures to prevent it. He caused a note to be sent to Dougherty, saying this, if he sang that song, the night hands would shoot him from the audience, as they intended to be there in force. This threat spread about like wildfire, and further intensified the desire among the miners and citizens generally to see the play and witness impending results. As the day approached for its production, the manager of the theatre, supported by the Central City authorities, sent down a request to the Elbert Guard to come up and assist in preserving order. Sport being anticipated, the Elbert Guard, fifty strong, shouldered their muskets, and soon after the raising of the curtain, marched merrily into the theatre, forming a strong line in the centre aisle. There sat the night hands, sixty or eighty in number, on the back seats intently watching the stage and awaiting the incident that should prove them or Dougherty master of the situation. Every place in front was occupied and every foot of standing room pre-empted. The gallery as usual was packed with miners from Gregory and Bobtail Hill, all loaded with anxiety to take a hand in any sort of a fracas that might turn up.

The opening scene disposed of, the curtain fell, and the stage prepared for Dougherty’s song. Every man behind the wings was armed with a Navy revolver. Soon the drop rolled heavily up to its place and disclosed a windlass (winch), ropes, buckets, shovels, a pile of quartz and all the customary accessories of mining. Dressed in a red shirt, and pants daubed with yellow clay, with a pick on his shoulder and a shovel in his hand, Mike strode onto the stage. Laying down his pick and taking a short clay “dudheen” (Irish–short clay pipe) from his mouth, he made a few preliminary remarks, and then opened the ballad of “Pat Casey’s Night Hands.” A string of wretched doggerel in the first place, it had been cut down, under the pressure of the threatened riot until all the best points and figures of speech mostly objected to by Casey were gone. Hence instead of interesting the audience, whose expectations had been raised to the highest pitch, it simply disappointed and disgusted them. At the end of the play the sentiment was unanimous that the “night hands” had got the best of it. These gentry hastened from the theatre highly elated. Taking a few drinks at Casey’s expense, they procured a brass band, organized a procession, and after marching through the principal streets of Central, went down to Gregory Point and Black Hawk, cheering at the top of their lungs for Casey and his “night hands.” About daylight next morning they returned to Nevada (Nevadaville).

Patrick’s career was short but robustly brilliant while it lasted. His reckless expenditure of money involved him at last in serious financial entanglements so that in 1864 he was obliged to sell his property and leave. Out of a property which, had it been properly managed, would of been worth half a million, he escaped with about $60,000 in cash. With this he went to New York City and engaged in the tobacco trade. Seeing the necessity of an education he applied himself diligently to study, and in due time mastered the common English branches. The report came to us a few days since, which we sincerely hope may be contradicted, that Casey had lost everything, and was dependent on his daily labor for support, as before he came to the Gregory diggings.

Local historian Louis J. Carter concludes with: To mill the ore from his mine, which was a part of the Ophir Lode, Casey had either built or rented a quartz mill located in Chase Gulch above Black Hawk. It seems that wagons and teams that were hauling the ore from the mine to this mill were using what is now Lawrence Street in Central City. There was so much traffic along this street and so much congestion at Mountain City caused by the heavy mining activities at the Gregory operations that the teams and wagons were being unduly delayed.

This caused Pat Casey much concern and being one who could not accept these delays built himself a wagon road along the lines of what is now Casey Avenue that permitted his ore to move from his mine and mill without the inconveniences caused by the congestion at Gregory Gulch. This road along the hillside was comparatively level until it entered Chase Gulch. Pat Casey soon passed out of the picture and the main road between Central City and Black Hawk was improved and the ore wagons ceased using Casey Road.

One of the great pressures in the early days of Central City was to find building sites for homes for the miners. Sites that could be reached by roads and be accessible for the delivery of good and wares. The road that Casey built was a natural. It was level, there were sites suitable for homes and it was near to the large Mountain City mines. In but a short time fine homes were built along the Casey. These were not cheap homes. Every home built on the Casey had to have retaining walls to keep the buildings from falling into the street. This added materially to the building costs. In addition to its fine homes, the Casey was well kept. The street was generally free of mud which covered most of the streets of Central City during the spring and fall seasons. The view from the street was the best in town. This was the place of show and promenade.

END_OF_DOCUMENT_TOKEN_TO_BE_REPLACED

Where the dead get to tell their story By Jaclyn Schrock On Saturday, August 21, the Gilpin Historical Society held their annual Cemetery Crawl. Tickets allowed the shuttle of hundreds of guests from the Teller House parking lot to the Cemetery. Depending on v... END_OF_DOCUMENT_TOKEN_TO_BE_REPLACED