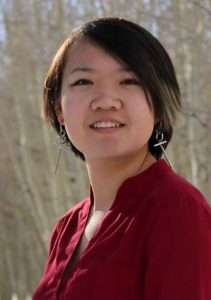 Anna Yocom, Gilpin High School’s salutatorian for the Class of 2019, is a soft-spoken young woman with wide-ranging interests. She recently shared her experiences, preferences, and viewpoints. Anna’s parents are Jerry and Katie Yocom and her sister is Halle, a freshman at Gilpin. The family includes two dogs, Labrador retrievers Apollo and Whistler, named for Olympic speed skater Apollo Ohno and ski slope Whistler Mountain.

One of Anna’s favorite things is the movie Shawshank Redemption with Morgan Freeman, which she admires for its artistic cinematography and its message. Sushi is a top culinary delight, which she generally orders on her birthday every September 20 at the Halu Sushi restaurant in Golden. She likes cheesy science and math jokes.

Anna is fond of all kinds of music and is currently taking a music appreciation class through Red Rocks Community College. She especially appreciates the works of Mozart and Beethoven.

“We’re required to attend a classical concert for our final project,” she says. “I’m going to a program on April 14 at Boettcher Concert Hall featuring the Brahms Symphony No. 4.”

She feels that her greatest strength is that she is an observer. “I like to watch and learn about things. It’s allowed me to learn about the world and about myself,” she notes.

If she could go anywhere in the world, she would pick China.

“I was adopted from China at 17 months of age,” she explains. “I had been living with foster parents in the province of Hubei. I would like to go back and see where I came from.”

If she could learn a new skill, Anna might attempt to learn Mandarin in case she does get to visit China.

One experience that really influenced her was a CHSAA (Colorado High School Activities Association) state leadership camp during the summer before her sophomore year.

“That just completely threw me out of my comfort zone!” she relates. “Five hundred people were there. Afterward, I felt I had grown as a person. It encouraged me to find something I was passionate about.”

She enjoys all school subjects, but her favorite is math because she enjoys the sense of accomplishment she gets after completing a hard problem. In her high school years, she has taken geometry, algebra, and AP (advanced placement) calculus.

Her second favorite subject is AP biology. “I’ve really enjoyed learning about the wide variety that biology covers. We started at the cellular level, and now we are covering ecosystems.”

In addition to taking classes, she also instructs others as a tutor for some local families.

Anna’s life is not all work and no play. In fact, she will play the role of a villain, Evil Gabbi, in this month’s Gilpin school production, She Kills Monsters.

“Evil Gabbi is a cheerleader that is a bully to the main character’s sister. There are choreographed fight scenes.”

Anna, a real-life cheerleader who is far from evil, admits to having fun stepping out of character to be a “bad guy.” She was also the White Witch in The Lion, the Witch, and the Wardrobe a couple of years ago and was Robin Starveling in last year’s production, A Midsummer Night’s Dream.

“I like to pretend that I’m someone I’m not when I’m on stage. It’s completely different than everything else I do.”

Anna tried cheerleading in her sophomore year and found the activity an enjoyable contrast to her other pursuits.

“At first, I was timid, but I have gained confidence. I like to learn the dances and to be precise in my movements. It’s also nice to bond with others on the cheer team.”

On November 15, 2018, the team competed in the Frontier League Spirit Championship and was judged seventh in the state of Colorado. Anna was distinguished as Cheerleader of the Year out of 12 who were nominated.

Another huge moment came when she heard that she had been accepted to the School of Mines.

“I was in my calculus class when I received an email about it. I called both my parents to let them know as soon as I got it.”

After graduation, Anna intends to study chemical engineering at the Colorado School of Mines, applying her knowledge and skills to her passion of renewable energy.

“It would be cool if I could stay in Colorado and work at the National Renewable Energy Laboratory or do research in another country.”

As most seniors, Anna had her share of scholarship interviews. The thing she found hardest about those meetings was the question, “Why do you deserve this?”

“It’s hard for me to talk about my achievements and to say I’m better than other people when I don’t know if I am.”

So far, she has received $5,000 per year to participate in the Vanguard Community of Scholars, a new group for women starting up at Mines. The award is renewable for four years.

Anna was also privileged to receive a monetary award from the Daughters of the American Revolution for her first-place essay on “What is the Greatest Challenge America Faces in the Future?”

“I talked about tolerance. One reason we struggle politically is that we don’t have tolerance for each other. If someone is a Republican or a Democrat and we are the opposite, we automatically reject their ideas. We should compromise and respect each other,” Anna stated. “There is fear about terrorism and about people coming up from the border. We need to understand that not everyone is going to be what we fear.”

Anna has lived in Gilpin County since she came here as a toddler and has always attended Gilpin schools. Her impression of Gilpin is good, but she comments, “At this school, a lot of people are conservative in their thinking. They are not open to people who are transgender or part of the LGBT community. I am part of Amnesty International, and one of our campaigns is ‘rights for everybody.’ We tried to do a spirit day for LGBT and get people to wear a little pin, but it didn’t work out.”

Anna has special words for her parents. “I love them and am really grateful for them. As an adopted child, I never felt different or at a disadvantage. I appreciate being here and getting these opportunities. If anything, being adopted is a gift to me, because I don’t know where I would be if I wasn’t here.”

Good luck and kindest regards, Anna, for a bright future!

END_OF_DOCUMENT_TOKEN_TO_BE_REPLACED

Benefitting the county, schools, and much more By Don Ireland   This year marks the 30th anniversary of casinos opening in the former little mining towns of Black Hawk, Central City and Cripple Creek, Colorado. In those early years, smoking was allowed inside ... END_OF_DOCUMENT_TOKEN_TO_BE_REPLACED