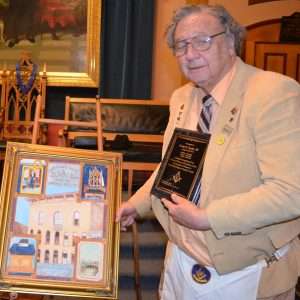 George Richard Snyder, age 78, passed away of heart failure at his home in Central City on Friday, November 24, 2017. George was proud to call Central City his home. His wife, family members, and many friends will miss him greatly for his friendship and his contributions to Gilpin County.

George is survived by Cindy Snyder, his wife of 38 years, a brother-in-law, one niece, and two great-nieces. His parents passed away many years ago, and his sister died last year.

A memorial service will be provided by Central City’s Masonic Lodge #6 during the spring, at a time to be announced.

George was born on December 8, 1938, in Ventura, California, and lived there until the age of seven. At that time, he and his parents moved to Denver. George graduated from Alameda High School and went on to earn a bachelor’s degree in journalism from the University of Denver. An early goal of his was to become a sports writer. Although he did not go into that field, he contributed articles about the Gilpin High School boys’ basketball team to the Weekly Register-Call for a number of years.

He received his master’s degree in secondary education administration from the University of Northern Colorado in Greeley.

George began teaching after he got his bachelor’s degree. He first became acquainted with the Gilpin community when he taught here in 1964 and 1965 at the Gilpin School (in the building that now houses the Gilpin History Museum). He coached sports and taught English and some other subjects. At that time, most teachers had to teach more than one subject because the school was small, graduating classes of only six or seven students.

He also served in other small mountain schools and some schools in eastern Colorado.

He and his wife Cindy met in 1977 when they were both working at the Colorado Secretary of State’s office in Denver. The couple was married on August 4, 1979, in a simple ceremony at Panorama Point in Golden Gate Canyon State Park.

Cindy tells of the many good memories she and her husband shared.

“At that time, we hadn’t thought of living here,” she recalls. “We both liked the mountains, but hadn’t gotten as far as to plan to move up here. We wanted a small wedding ceremony, nothing fancy. We saw Panorama Point one day and decided that was the place.”

The Snyders lived in a Denver apartment during their first year of marriage, then relocated to tiny Arickaree on Colorado’s eastern plains, where George served as the school principal for two years.

George and Cindy missed the mountains though, and decided to return to the high country, settling in Georgetown. He was working for the state during this period and made the commute between Georgetown and Denver for a long time.

“It was his last job till he retired in the late ‘90s,” Cindy relates. “We were ready to buy a house in 2007, and we were doing a lot here in Gilpin. It made sense to us to look in Central City. We wanted to live in the community we were involved in and where we already had so many friends.”

George and Cindy were both active in Central City service organizations. George became a member of the Central City Elks Lodge #557 in the 1960’s and maintained his membership for 51 years, staying active up until his death. He held every office at one time or another, including leading as the Exalted Ruler in 1986-1987 and again in 1996-1997. George helped with the Elks’ scholarships for local students and performed other community service.

“He called the monthly bingos there, and I helped him for ten to 15 years with that,” Cindy recalls.

She recounts the story of George and his friend John Figler arranging for Job’s Daughters (the girls’ auxiliary of the Freemasons) to come up from Golden to participate in the Elks’ annual memorial service.

“They did it for close to thirty years. George and John arranged that the Job’s Daughters were invited every December. They did the Masons and the Elks at the same time. Job’s Daughters still do the memorial service, and they did one this month, speaking about George.” That was a difficult, yet special, service for Cindy.

George was also a member of the Central City Masonic Lodge #6. Joining the Masons had appealed to him because his father was a Mason before him, and George liked what he saw and heard about the organization.

“George was a big history buff. When he saw this historic Lodge in Central City, he decided he wanted to be involved in this one-of-a-kind Lodge and became a Mason here on December 8, 1965,” Cindy says.

Over the years, he either coordinated or assisted with many Masonic projects. One of the biggest was the Lodge’s annual celebration of George Washington’s birthday and cherry pie festival. The festival was begun in the 1940’s but had been discontinued in the early 1960’s. George resurrected the tradition around 2006, and Cindy helped by doing a lot of the cooking. It was a big thing for Gilpin school kids; she recalls about a hundred kids at these events each February, getting a history lesson on our nation’s first president and on Central City while enjoying cherry pie.

George was also instrumental in operating the child ID program booth at the Gilpin County Fair and opened the Lodge for summer tours.

It was important to both George and Cindy that the beautiful meeting place, filled with its hand-painted murals and three-dimensional frescoes, be shown both as a Masonic Lodge and as a museum.

“He was among the movers and shakers that helped keep this Lodge alive. He loved showing this place. Every year, groups who were studying history would come up from Denver for tours. George also loved to bring other Masonic groups here with their ceremonies. The Lodge was super important to him, and it’s partly why we bought our house close to the Lodge.”

Cindy intends to continue giving tours on request. She points out the Lodge members’ latest project, a remodel of the dining room that was done last spring. They took off old wallpaper, did a lot of patching, put new plaster on the walls, and painted the room a fresh blue. The members also made a couple of amazing discoveries as they were doing the work.

“We found two old American flags from the late 1800’s and an old Masonic table that we believe is as old as the building!”

While George did not participate in that restoration, the work made him proud.

George was a quiet, low-key man who didn’t seek the limelight for his community service. Others recognized his qualities, however, selecting him as Elk of the Year and bestowing numerous other awards. The achievement that brought him most pleasure was earning his 50-year pins in both the Masons and the Elks organizations. The Masonic Lodge noted his 50-year anniversary with a special ceremony on September 9, 2015, awarding George a pin, a certificate, and other special gifts as tokens of his remarkable dedication. George had been through a health crisis the previous year and wasn’t expected to live. Part of his incentive to survive was the prospect of making it to the 50-year mark.

Besides the Elks and the Masons, George was also passionate about teaching sports to young people. He coached before he and Cindy were married and continued doing so in Gilpin.

“Between Little League baseball and high school basketball, he coached generations of kids for more than forty years. He coached Little League in Georgetown and brought Little League to Gilpin. He and Fred Weber coached. The kids first practiced on mine tailings above what is now the city center parking lot. There was no field or level place to play, no lights or sand, just gravel or worse. It was primitive, a different era as far as the conditions!” she recollects.

George served as an assistant coach in baseball and basketball locally in the 1990’s and continued to help local coaches through spring and summer of 2017. The past two years, he assisted just with high school baseball.

“He was also a big Red Sox fan. They hadn’t won the World Series for about fifty years, and the year they won the pennant, we were glued to the TV!”

George was thoughtful of his wife. “He taught me about sports, especially baseball. We’d watch a game and discuss what was going on. We enjoyed those times. When he was growing up, he was a board boy for the Denver Bears. Pitcher Bob Feller and other famous pitchers – we’re talking Hall of Fame – would sit with him while he was doing that. He was mad at himself because he didn’t think to get their autographs! Of course, he was too young to know what their careers would become.”

The pair loved the mountains, the fall aspen colors, ghost towns, and wildflowers. “We enjoyed going for drives. George made a special effort to take me to Ouray several times over the years. It was my favorite place. He took me there on one of the first trips of our marriage, and I couldn’t believe the beauty. When you’re married that long, you learn to share interests.”

George and Cindy’s friends are invited to share their written memories of him. Mail to Cindy Snyder at P.O. Box 491, Central City, CO 80427.

END_OF_DOCUMENT_TOKEN_TO_BE_REPLACED

Benefitting the county, schools, and much more By Don Ireland   This year marks the 30th anniversary of casinos opening in the former little mining towns of Black Hawk, Central City and Cripple Creek, Colorado. In those early years, smoking was allowed inside ... END_OF_DOCUMENT_TOKEN_TO_BE_REPLACED

Benefitting the county, schools, and much more By Don Ireland   This year marks the 30th anniversary of casinos opening in the former little mining towns of Black Hawk, Central City and Cripple Creek, Colorado. In those early years, smoking was allowed inside ... END_OF_DOCUMENT_TOKEN_TO_BE_REPLACED