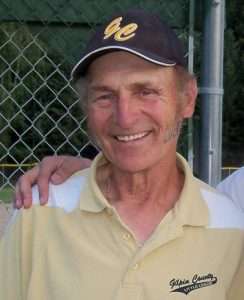 Frederick Hans Weber, age 72, of Clarksville, Tennessee, passed away on December 9 at his home after a two-year battle with cancer. A memorial service was held on December 17 at Hilldale Baptist Church in Clarksville.

Gilpinites will remember Weber as the organizer of Little League in our community and a Little League coach for 38 years. A ball field in the county is named in his honor. He was someone who made a huge positive difference in the lives of many in Gilpin County.

Fred was born March 28, 1942 in Dunkirk, New York, the son of John Hans Weber and Joan Weber. He was a U.S. Army veteran, a member of the 101st Airborne, and a member of Hilldale Baptist Church.

Below is a reprint of Fred’s retirement announcement in July of 2011.

One of the most well-loved baseball coaches in Gilpin County history is moving on. Fred Weber will end 32 years of coaching youth baseball when he moves to Tennessee. Gilpin County Little League is hosting a farewell party for Fred on Saturday, July 16th, 1:00 at Weber Field. Everyone who has ever played for – or against – Fred, umpired for him, coached with him, served on the Little League Board, helped build ball fields or just plain knows Fred, is welcome to come.

When Fred first started coaching baseball in Gilpin County in 1980, the present-day ball fields were just a dirt lot. All “home” games were played at the Idaho Springs, Empire or Georgetown baseball fields. Fred and other local baseball fans, would work the fields. “Bobby Allen and Don Grapes would bring their heavy equipment over and level the fields just so we could practice,” says Coach Fred. After years of having no real home fields to play on, Gilpin County upgraded the local dirt lot in the early 1990’s. The Recreation Board named the larger field “Weber Field” to acknowledge his incredible commitment to youth baseball.

His team played hard for Fred in his final Little League game on Thursday. Down by 4, they rallied for 6 runs in the bottom of the 6th inning (Juniors play only 7 innings). They held on to beat Summit County 13 to 12 to secure Fred’s final victory.

Over the years, Fred’s teams have won and lost many baseball games. Each player has finished their season with a better understanding of the game, and having had a chance to grow personally, as well as athletically, with Fred as their coach.

Fred’s wife and daughter, while waiting for Fred to tire of coaching baseball, have moved on to Clarksville, Tennessee ahead of him. Fred has strict orders to follow them when the season wraps up.

If you want to talk baseball with Fred one last time, please stop by the ball fields on the 16th. If you can’t make it Saturday, Fred will also be at the Little League end of season party at The Last Shot on Sunday, July 17th at 2 pm. After that, you might have to travel to Tennessee to see your favorite coach.

END_OF_DOCUMENT_TOKEN_TO_BE_REPLACED

Benefitting the county, schools, and much more By Don Ireland   This year marks the 30th anniversary of casinos opening in the former little mining towns of Black Hawk, Central City and Cripple Creek, Colorado. In those early years, smoking was allowed inside ... END_OF_DOCUMENT_TOKEN_TO_BE_REPLACED