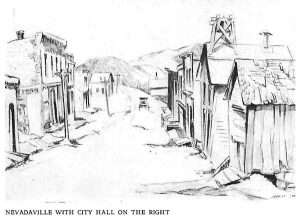 Muriel Sibell Wolle taught at the University of Colorado, Boulder, in 1926, and served as head of the department of Fine Arts from 1928-1947. She loved Colorado ghost towns. She visited them and learned their history, primarily from: library research, tales of the inhabitants, and from her visits. She wrote six books on mining camps and towns,mostly in Colorado. There were two books, which portrayed Nevadaville: Ghost Cities of Colorado a Pictorial Record of Central City, Black Hawk, Nevadaville copyright 1933, and Stampede to Timberline copyright 1949. The sketches are from Ghost Cities of Colorado. The excerpts below are from Stampede to Timberline:

“One day I started for Nevadaville, a mile above Central City. It was not like Central City, but was a real ghost town, with scarcely any population left. The road to it climbed steadily from the site of the old Baseball Park to the Chain-O-Mines mill and settling pond, past the deserted stone brewery and the Masonic Cemetery. On one side the gulch cut a gash through the crumbling rock and sandy banks, and on the other side of the hill rose steeply to the distant terraced streets of the town. Many of the houses were gone, but their fenced yards and stone terraces marked their location. The roadbed was rough, the sun was hot, and the 8,000 foot altitude made me pant, but Nevadaville lay just around the corner and I plodded on. The Main Street was more imposing in the nineteen thirties than it is today when so many of its buildings have been razed. The town had two-story brick stores lining the right hand side of the street,  while on the upper left stood the diminutive City Hall, which was little larger than a garage, was found to house the Fire Department, and its basement contained a one-room jail. Next to it stood the Bald Mountain post office, its windows boarded up as were most of the windows in town.

At the far end of the main street, crowning the hill stood the Episcopal Church. Its weathered door was ajar, and although I was accustomed to old buildings, the wreckage inside appalled me. The floor was buckled and broken, velvet kneeling cushions were scattered about, hymn books with torn pages, moldy and water-soaked were strewn at random, and everything was so musty and dank and utterly neglected that it was difficult to picture this church as it once must have been during its years of service in a live community.

A year later I returned to Nevadaville and found that the steeple of the church had blown down in a heavy wind storm and lay rotting into the ground. A few years passed and the entire church was gone, only a slight depression in the ground indicating its location.

The frame schoolhouse also disappeared, but luckily on my first visit to the town I had sketched not only its exterior but its empty rooms where desks, books, maps, a clock, and a tattered flag were strewn about.”

According to A Concise Social and Business Review of the Three Principal Towns in Gilpin County, written in 1905: “The public school building of Nevadaville is not as handsome a structure as one usually finds in the school districts of the state; the building is a long, low, one-story structure, built on the hill in a good location to accommodate all sections of the town. A portion of the building was erected in the early days, and as the necessity demanded it new portions were added, until the length of the building is out of proportion. The school consists of four rooms, with a principal, Professor Wilson, with a force of three teachers teaching an average of 300 scholars. The School Board of the town consists of the following members: Thos. O. Davey, president; J.J. Clark, treasurer; Mrs. Oct. Cuchman, secretary. All the members of the board are of high standing in the community and each have the welfare of the school at heart, and their work has been very conscientious and very satisfactory to all.”

“Christ Church, Nevada City, was consecrated on Tuesday morning last, to the worship of Almighty God, by Bishop Randall. Christ Church is a very neat and commodious edifice; finished and paid for. We understand that it is the rule of Bishop Randall, not to consecrate a church on which there is a single dollar of debt. This is a very good rule, which we hope may never be departed from. A neat and substantial tower has just been erected at an expense of five hundred dollars, which adds very much to the ecclesiastical appearance, and architectural beauty of the church. A fine-toned bell of three hundred pounds, a present to the parish, has been placed in the belfry, and it sends out its silvery notes among the mountains, to call the people to the temple of God. This edifice is an ornament to the town, and we trust will prove a great blessing to the people.”

Bishop Randall went on to consecrate other nearby mountain Episcopal churches, such as the church in Empire City. The whereabouts of the Nevadaville Episcopal Church bell and furnishings are unknown. The original Nevadaville school bell is on display at the Gilpin History Museum.

END_OF_DOCUMENT_TOKEN_TO_BE_REPLACED

Benefitting the county, schools, and much more By Don Ireland   This year marks the 30th anniversary of casinos opening in the former little mining towns of Black Hawk, Central City and Cripple Creek, Colorado. In those early years, smoking was allowed inside ... END_OF_DOCUMENT_TOKEN_TO_BE_REPLACED