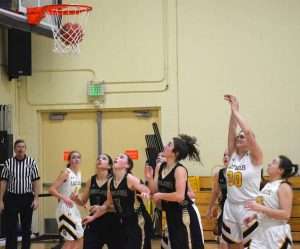 Got thumped by Highland Huskies and Heritage Christian

The Gilpin boys’ and girls’ varsity basketball teams were shut out by the Highland Huskies of Ault on January 31 at home and the Heritage Christian Eagles of Fort Collins on February 1 away.

The Lady Eagles were pleased to post a 34-18 win against Twin Peaks Charter Academy at Longmont on January 25.

Win or lose, both teams can be proud of the way they have played with heart and perseverance.

The Eagles visited Denver Academy on Tuesday, February 5, with results unavailable at press time. Support them on Friday evening, February 8, as they host Dawson; the boys’ game starts at 5:30, and the girls play at 7:00. Seniors will be recognized that evening, and the Gilpin Pee Wee Cheerleaders will pep up the crowd.

The Gilpin boys were on a roll in league contests, winning four straight games against Lyons, Front Range Christian, Longmont Christian, and Union Colony. Good leadership from seniors Will Lorenz and Alex Wilhelm and smart teamwork from all players showed definite promise.

However, the team’s winning streak came to a halt — at least temporarily — with league losses to Denver Christian, Twin Peaks Charter Academy, and most recently to Highland and Heritage. The Eagles’ present losing streak brings their season record to 6-9, including 4-4 in league battles.

While Gilpin beat Heritage in last year’s match-up, they lost to Highland. They also lost to both teams during the 2016-17 season. Wins would have been sweet this year, but these are tough teams in a very competitive 2A Mile High League. Highland holds an 8-0 league record, 14-1 overall, and Heritage is 6-3, 12-4 overall. Both stand good chances for victory in District play-offs later this month and even have a chance at the State tournament.

The home battle against Highland resulted in a painful 81-48 loss to Gilpin, which was hampered by the absence of a couple of their starters. There were some good moments — Gilpin was first on the board with 2-point and 3-point field goals, and Lorenz shot 26 points. Braden Harris, who sees a little less action than the main starters, got a chance to add 4 to Gilpin’s tally, and Chad Holmes scored the game’s final basket. Wilhelm enjoyed 67 percent accuracy at the free throw line. However, Gilpin struggled against the Huskies’ defense and had difficulty completing passes. Highland got away with 32 steals and 26 deflections. At the basket, several Huskies players shot with 50 percent accuracy or better.

One of the more interesting plays occurred in the fourth quarter, when Lorenz was fouled during a layup and somersaulted out of bounds. He rose to see the ball lodged between the basket and the backboard. He got his chance at the free throw line, swishing in 2 points.

The boys fared slightly better in Fort Collins against Heritage, bowing 63-46. Lorenz was tops again in scoring for Gilpin with 23 points. Wilhelm, Stephen King, and Nolan Lindberg each came in with 7. Heritage shot more accurately, but rebounds, steals, and fouls stats were about equal between the two teams.

Lady Eagles on the Court

Gilpin girls enjoyed their first league victory as they were hosted by Twin Peaks Charter Academy of Longmont, trouncing their competitors 34-18. Alicia Johnson and Jessica Wilhelm were point leaders, with 12 and 10, respectively. Another highlight was 24 total rebounds for Gilpin.

They were topped 40-27 by the Highland Huskies on January 31. Lena Warren shot the first 2-pointer, Wilhelm led the Lady Eagles with 10 points, and Sarah Trujillo dogged the Huskies with aggressive defense throughout. Nicole Adams, Noemi Correa, Madison Altman, Alicia Johnson, Kristi Schmidt, and Kendra Wenholz all contributed to the effort. Samantha Smith and Elizabeth Herbert were sidelined with injuries.

Gilpin accepted a 34-14 loss against Heritage Christian. Heritage is undefeated this season, with an 8-0 league record and an overall season record of 15-0.

END_OF_DOCUMENT_TOKEN_TO_BE_REPLACED

Where the dead get to tell their story By Jaclyn Schrock On Saturday, August 21, the Gilpin Historical Society held their annual Cemetery Crawl. Tickets allowed the shuttle of hundreds of guests from the Teller House parking lot to the Cemetery. Depending on v... END_OF_DOCUMENT_TOKEN_TO_BE_REPLACED