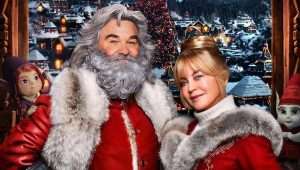 Six TV movies this week and more to come

It’s that time of year when certain television channels pummel us with the cheesiest, predictable holiday movies produced on a shoestring budget; but let’s face it, this year we could all use a little predictable cheese with a preordained happy ending. With movie theaters either shut down or not showing anything new, my attention is turned to the magic box of colorful images and sounds. My wonderful wife and amazing daughter have gleefully agreed to watch a handful of Christmas movies with me (“just a handful?” asks my daughter) so we can rate them with a critical eye. In the spirit of the season, my rating scale has been adjusted to reflect the pleasure of the experience more than the questionable quality and so we will look at the traditional plot, acting, adult material, music, and message; but also the less traditional cookie scale (does it have Christmas cookies), does it feature a small town, does an ex-flame cause problems, holiday naming (characters, places named for the season) and whether or not Santa is either featured or real. Oh, and any movie that brings tears gets a bonus point. For this first week, we watched six movies from three different platforms: Hulu, Netflix, and Hallmark.

This movie is less about Christmas than it is about a woman coming out as gay to her conservative family. Mackenzie Davis (“Blade Runner 2049,” “The Martian”) plays Harper, the daughter of a congressman about to announce his candidacy for mayor. Victor Garber (“Alias,” “Legally Blonde”) plays her dad and he rules his family with a stern rigidity to appear “normal” for the sake of his political future. These strictures have affected Harper’s siblings in their efforts to have dad’s approval. Harper’s girlfriend, Abby, played by Kristen Stewart (“Twilight” series, “Charlie’s Angels”) and her best friend John, played by Daniel Levy (“Modern Family,” “Cyberstalker”) turn the tables on Harper’s family causing everyone’s closely guarded secrets to be revealed. The movie gets full points for utilizing a small town in a good way, but fails to reach the mark in every other category. There is no Santa and they do not use holiday naming. My daughter scores it two-point-eight pancakes, my wife two-point-six dead fish, and I scored it three-point-five paintings.

This film was a surprisingly fun tale of two children who try to catch Santa in the act which leads to mayhem and threatens to end Christmas for most of the world. Underneath the antics is a serious plot of how the children are trying to move on after their firefighter father dies tragically being a hero. Kurt Russell (“Escape from New York,” “Overboard”) puts a fun spin on Saint Nick as he grants the Christmas wishes of Teddy, played by Judah Lewis (“Game of Silence,” “Summer of 84”) and Kate, played by Darby Camp (“Big Little Lies,” “Benji”) in an unexpected way. The film hits most of the points on the scoreboard except it doesn’t feature an ex-flame or a small town; however, it gets a solid cry bonus. My daughter scores it four-point-nine ornaments, my wife four-point-eight compost bins, and I give it four-point-seven sunglasses.

Kurt Russell returns as Santa in this sequel to the 2018 movie, and this time it is set mostly in the North Pole. The film falls victim in trying to recapture the cuteness, fun, and seriousness of the original, except the writers don’t seem to understand what made the original special, so it’s over-the-top cuteness, fun in the wrong places, and making an unconnected character the object of a serious undertone. Teddy and Kate’s mom is dating, and her new beau, Bob, played by Tyrese Gibson (“Fast and Furious” series, “Transformers”), is making Kate think he is replacing her dad. She goes as far as trying to run away and gets caught up in a plot by a cursed elf to take over the North Pole. The movie scores well for its Christmas themes, but the plot and acting are not great. Kurt Russell and his adorable partner, Goldie Hawn (“First Wives Club,” “Overboard”) who plays Mrs. Claus, carry the movie. My daughter scores this three-point-nine hot beach Christmases, my wife four carol sings, and I give it three-point eight snow cats.

This musical is set in a Dickens-like era that is full of magic and wonder. Jeronicus, played by Forest Whitaker, is a clever toy maker who loses his confidence when his book of inventions and his greatest toy is stolen by his apprentice Gustafson, played by Keegan-Michael Key (“Keanu,” “Tomorrowland”). With no evidence for the police, his toy shop is quickly overshadowed by Gustafson who has gone into the business with Jeronicus’ secrets to toy making. When his bright and optimistic grand-daughter, Journey, played by Madalen Mills (this is her first role) comes to visit, she brings with her the confidence Jeronicus has been missing and turns the tables on Gustafson. The movie is full of singing, dancing, and fun, but utterly fails at the end having no finale. Whether for budget, creative choice, or they simply ran out of time (perhaps COVID?), the movie feels unfinished which is disappointing, because it would have had a perfect score. My daughter scores it three-point-five physics equations, my wife four twirly whirlies, and I gave it three-point-five eyeglasses.

Of all the movies we watched, this one disappointed me the most. It has so much promise; a unique story featuring a unique holiday with great actors, and I wanted it to be better than it was. This movie is about a single woman, Christina, played by Mia Kirshner (“The Black Dahlia,” “Bloodline”), who was adopted as an infant, discovering through a DNA test that she is 50% Jewish which leads her to her biological mother Ruth, played by Marilu Henner (“L.A. Story,” “Taxi”) and her family. Christina ends up spending a lot of time at Ruth’s home which also means she spends time with a restaurant critic, David, played by Ben Savage (“Boy Meets World,” “Criminal Minds”) who gave Christina’s restaurant a less than favorable review. The movie scored full points for cookies, adult material (the adoption story was handled very well), and the music. However, probably because the movie felt like a two-year story crammed into one week, it fell flat in other areas. My daughter scores it two-point-three latkes, my wife two-point-three briskets, and I gave it one-point-nine broken pipes.

Here is a movie that on the surface appears horrible in its premise, but ends up being rather cute and fun. The story is about a successful businesswoman, Krissy Kringle, played by Hilarie Burton (“One Tree Hill,” “Surprised by Love”), who is inadvertently sent Santa’s Naughty and Nice book of names. All she must do is say someone’s name and all their naughty deeds are revealed. Naturally, Krissy selfishly uses the book to her advantage creating mayhem and heartache until she realizes that if she turns the book over, it reveals all the nice things people have done. The book acts like a scale in which the good and the bad are weighed and whichever is heaviest determines which list someone is on. Devastated about her actions, Krissy strives to undo the damage she’s done in other’s lives. The movie hits more than half the Christmas categories with a solid point, but oddly, has no cookies and very little music. My daughter scores it three-point-one jingle bell shakers, my wife three-point-five triple shot lattes, and I give it three-point-five cocoa spills.