Racing at 165 mph on the Central City Parkway… 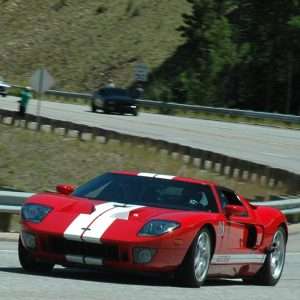 Most of us have exceeded the speed limit a bit on occasion when the opportunity arises and it’s safe to do so, but when did you ever think you’d get the chance to rev the old family sedan up to 165 mph! or better yet, if you have a Corvette, Ferrari, Lamborghini, Porsche, Lotus, Mustang, Nissan Z, Subaru WRX, or other street-legal race car in your garage.

This past Saturday, the Pit Rally team organized a rare opportunity for drivers to pay a $350 entry fee for the touring class, or a $500 entry fee for the professional class to run timed races for the day on the 8.3 mile Central City Parkway after petitioning the City Council in the spring to allow them to close off the parkway from I-70 to the Big-T parking lot. The City received $7,500 from Pit Rally for the privilege of closing the parkway down to normal traffic from around 9:30 am to 4 pm, but other than that, this was a privately run free event and not a City event. The City Council is to be commended for being far-sighted enough to give this venture a try, and from my perspective it looked like the event was well attended by racing teams, drivers, friends and family, and other racing fans. We all looked forward to enjoying this unique opportunity on a gorgeous Colorado day in the mountains. Main Street was blocked off and filled with vendor booths, most being automotive and racing related, with a festive and friendly small-town atmosphere.

This was probably an awesome event for the drivers, but not so much for the spectators. Because this was the first time to hold such an event, there were some logistical issues that could have been handled better, and I assume will be corrected for future events if allowed. Checking out the Pit Rally website Friday night before the races to see what vantage points and transportation would be available, it seemed well-planned with three areas along the parkway to see the cars at their top speeds, on corners, and at the finish line near the Gambler’s Edge RV Park. Three shuttles would be taking spectators to these points prior to the race, and once an hour during the races, and would return them to Central City each hour or at the end of the race.

That didn’t happen. We, along with many other race fans, arrived early enough before the advertised event start at 10 am, expecting to catch the shuttle to our choice of the three vantage points. Unfortunately, we waited in line for about an hour and a half before they had the parade of cars streaming down the parkway to Main Street. The Pit Rally team at the Main Street location were nice enough and trying to be helpful, but their radios didn’t work and apparently their counterparts on the other end started some races early and closed the parkway so that the shuttles couldn’t run, other than to the RV Park at the end of the course. We had to wait on Main Street until the touring class completed before we were taken to the two mid-course sites. Once there, we set up our camp chairs and enjoyed the racing, with different heats coming by every 15 minutes or so. Because there was no loop, all the cars had to come through and wait for the heats to complete before they could return to the finish line. When the slower cars finished, the truly fast race cars ran all-out, reaching speeds of 165 mph we were told. By then, we were fairly well toasted and ready to leave, but were stranded until the shuttle buses finally arrived in shifts to take us back to Central City. Unfortunately, they could only take us to the RV park as the drifting exhibition was getting ready to start, and the parkway was closed from that point down to Main Street. We would have liked to have seen the drifting, but were so sunburnt by that point that we just wanted to leave – but couldn’t. So we and hundreds of other race fans had no choice but to hike the mile down from the RV park to the city. This was fine for those who could, but there were some seniors and children who couldn’t, so they were stranded there until the drifting was finished.

I am a race fan and glad I went, but next year if the event is held again, I will drive myself to the RV Park so I’m not stranded.

END_OF_DOCUMENT_TOKEN_TO_BE_REPLACED

Benefitting the county, schools, and much more By Don Ireland   This year marks the 30th anniversary of casinos opening in the former little mining towns of Black Hawk, Central City and Cripple Creek, Colorado. In those early years, smoking was allowed inside ... END_OF_DOCUMENT_TOKEN_TO_BE_REPLACED

Benefitting the county, schools, and much more By Don Ireland   This year marks the 30th anniversary of casinos opening in the former little mining towns of Black Hawk, Central City and Cripple Creek, Colorado. In those early years, smoking was allowed inside ... END_OF_DOCUMENT_TOKEN_TO_BE_REPLACED