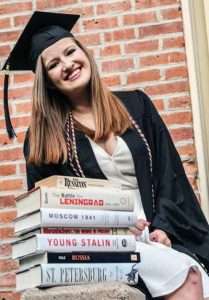 Rachel Schmalz has visited many European countries in the years since she graduated from Gilpin County High School. This fall, she’ll be working in another country – one that many people here haven’t heard about. Schmalz has received a Fulbright U.S. Student Program award for an English Teaching Assistantship to Moldova for the 2021-22 academic year, which begins in September.

The Republic of Moldova is one of the smallest and poorest countries in the Balkan region of Eastern Europe, sandwiched between Romania and Ukraine. The nation is relatively young, having declared itself an independent nation in 1992, shortly after the fall of the USSR.

“I’m grateful for this opportunity,” said Schmalz, 22, a lifelong resident of Central City. “I’m glad that I will be teaching college students at a university because I think that’s what I’d like to do in the future.”

A 2021 Hastings College graduate who majored in history and political science, Schmalz studied the Russian language for two years. Although Moldova’s primary language is Romanian (also called Moldovan), many residents also speak Russian, Bulgarian, and Ukrainian. “I hope I’ll be able to learn more of the (Russian) language,” she said. Classroom teaching, language clubs, coffee hours, and further advancing mutual cultural understanding all are part of her goals to impact her students and colleagues learning in Moldova. Schmalz said she aims to further her interest and past academic experiences in Eastern Europe through a variety of formal and informal enrichment and cultural programming events as part of her language-teaching responsibilities.

While working on her bachelor’s degree, Schmalz spent her sophomore year in Europe. Her studies enabled her to visit England, Ireland, France, Bulgaria, Slovakia, and the Czech Republic. The coronavirus pandemic struck Europe in March 2020, when Schmalz was visiting England while studying in Bulgaria. She stayed with friends and studied online because of travel restrictions that prevented her from returning to Bulgaria. The pandemic also delayed her from returning to the United States. She finally returned home to Central City in May. “Everything was delayed because of Covid,” she noted.

During some of her summer breaks, she returned home and worked at Dostal Alley, which is owned by her relatives, the prominent Schmalz family. This summer, she coached youth softball in Golden. She also served as a mentor in the Big Brothers and Big Sisters program.

Recipients of Fulbright awards are selected in an open, merit-based competition that considers leadership potential, academic and/or professional achievement and record of service. As Fulbright alumni, their careers are enriched by joining a network of thousands of alumni, many of whom are leaders in their fields. Fulbright alumni include 60 Nobel Prize laureates, 88 Pulitzer Prize recipients and 39 who have served as a head of state or government. Schmalz joins a group of Hastings College alumni who have been awarded Fulbright Program awards dating back to 1953.

In the future, Schmalz said she would like to study for a Master’s Degree in Ukrainian history, possibly at the University of Alberta, and – beyond that – contemplates working for a doctorate. “I really like research and reading.”

“Rachel is a well-travelled student, a diligent scholar, and emerging teacher. Both she and her students will benefit tremendously from this opportunity,” said Dr. Robert Babcock, Hastings College’s Fulbright Program faculty advisor. “She has developed a passion for all things Eastern Europe, and she shares that passion as well as her unapologetic belief in the benefits of studying abroad with anyone who will listen. Her new roles as citizen ambassador and Fulbright U.S. Student Program English Teaching Assistant are a direct result of the experiences she has made for herself at Hastings College, and she will thrive in both. We are very proud of her.”

Rachel’s parents, Gwen and Buddy Schmalz, are longtime Central City residents. The Schmalz’ also have a son, Ty, who graduated from a Master’s program in Athletic Training at the Oklahoma State University in Tulsa. “My dad wants to have daily Facetime calls with me while I’m in Moldova,” Rachel Schmalz said. “I have to thank my family for pushing me to go for this.”

When she reaches Moldova, Schmalz won’t be surrounded by some of her fellow college students the way she has in recent years. “I’ll be more on my own – it will be an adjustment,” she said. Although Moldova’s chief export is wines, Schmalz is hoping to work on a “hometown-homework assignment.” She plans to sample local beers in the region and report any interesting recipe ideas to her father, whose beer-making skills have led to multiple microbrewing awards for Dostal Alley.

Since 1946, the Fulbright Program has provided more than 400,000 participants from over 160 countries the opportunity to study, teach and conduct research, exchange ideas, and contribute to finding solutions to shared international concerns. The primary source of funding for the Fulbright program is an annual appropriation by the U.S. Congress to the U.S. Department of State’s Bureau of Educational and Cultural Affairs. Participating governments and host institutions, corporations and foundations in foreign countries and in the United States also provide direct and indirect support.

END_OF_DOCUMENT_TOKEN_TO_BE_REPLACED

Benefitting the county, schools, and much more By Don Ireland   This year marks the 30th anniversary of casinos opening in the former little mining towns of Black Hawk, Central City and Cripple Creek, Colorado. In those early years, smoking was allowed inside ... END_OF_DOCUMENT_TOKEN_TO_BE_REPLACED

Benefitting the county, schools, and much more By Don Ireland   This year marks the 30th anniversary of casinos opening in the former little mining towns of Black Hawk, Central City and Cripple Creek, Colorado. In those early years, smoking was allowed inside ... END_OF_DOCUMENT_TOKEN_TO_BE_REPLACED