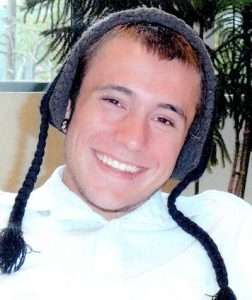 Quinn Michael Sullivan-Patterson passed away on Saturday, April 18, 2020, only a few months before his 26th birthday. Quinn was born in Brighton, CO at the Platte Valley Hospital. He lived two weeks in Platteville before moving to Gilpin County, Colorado.

While growing up, Quinn enjoyed all sports, playing video games, and snowboarding that he learned with his sister Jessica and her husband Dan. His favorite sport was ice hockey. He first learned to skate on the local ponds then moved on to play in the recreational leagues in Arvada for many years. He also liked playing cards, learning cribbage by age 7, poker, and playing board games with family and friends.

Every summer was spent along the Mississippi River in Dubuque, Iowa with awesome aunts, uncles, and cousins having fun around the pool and enjoying lots of great birthdays.

One of his father’s favorite memories with his son was their many Spring Break vacations throughout the country, with New York being his favorite trip.

Quinn graduated from Gilpin County before attending Red Rocks Community College, and then onto CU Boulder. While attending CU Boulder, he started working for Microsoft at the Flatirons Mall as a product advisor. He then took a promotion to Cloud Technical Expert and moved to Jacksonville, Florida in 2017. While in Florida he enjoyed the weather and beaches with his girlfriend, tried skydiving in St. Augustine, and made lots of new friends. He volunteered at the Children’s Hospital, Special Olympics, and other places while in Florida.

Upon his return to Colorado in February this year, he was editing video as a hobby, and was working on a job for Home Advisor. He was excited and anticipating a hot new job in Artificial Intelligence sales and a move to California when his untimely death occurred.

A “Celebration of Life” memorial will be held later this summer TBD. In lieu of flowers, please make donations to any homeless shelter.

Quinn will truly be missed by his family and many friends.

END_OF_DOCUMENT_TOKEN_TO_BE_REPLACED

Where the dead get to tell their story By Jaclyn Schrock On Saturday, August 21, the Gilpin Historical Society held their annual Cemetery Crawl. Tickets allowed the shuttle of hundreds of guests from the Teller House parking lot to the Cemetery. Depending on v... END_OF_DOCUMENT_TOKEN_TO_BE_REPLACED

Benefitting the county, schools, and much more By Don Ireland   This year marks the 30th anniversary of casinos opening in the former little mining towns of Black Hawk, Central City and Cripple Creek, Colorado. In those early years, smoking was allowed inside ... END_OF_DOCUMENT_TOKEN_TO_BE_REPLACED