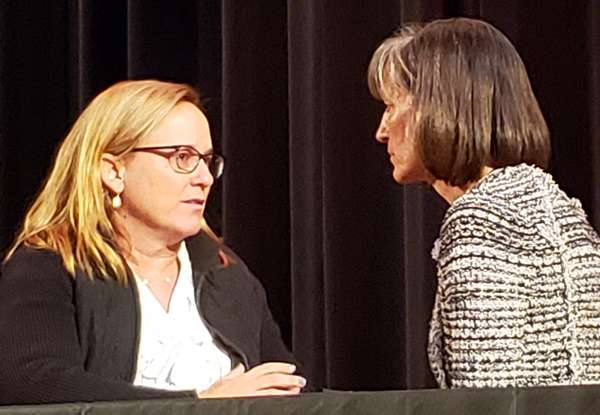 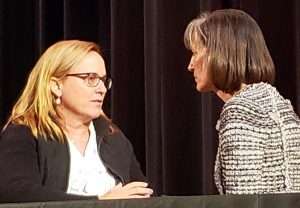 On Monday, January 13, 2020 a Town Hall meeting was held 6:30-8 pm so that Gilpin County’s CO Senator and CO House Representative could listen to concerns and offer their authority with state government officials for our support.

CO Senate District 16 (portions of Boulder, Denver, Jefferson Counties and all of Gilpin) is represented by Senator Tammy Story.

KC Becker has served as Representative for Colorado House District 13 since November 2013, nominated to fill the resigned position of Claire Levy. Becker has served as CO House majority leader before January 2019 when she began as Speaker of the House. Becker is the third consecutive woman to serve as Speaker of the House and the fourth in Colorado History.

Becker has co-sponsored six bills that have become law and two still in process from the 2019 session. Topics range from labor and employment, local and state government, education and natural resources, and the environment.

In 1991, Becker earned her B.A. in government from the College of William & Mary. She also earned a M.S. in real estate development and construction management from the University of Denver’s Daniels School of Business along with her law degree from Northwestern Law School of Lewis and Clark College, with emphasis in environmental law, 1996. Professional experience includes working with the Department of Interior’s Honors Program on national policy, public land issues, and in real estate.

Becker served on Boulder City Council since 2009, part of the time as the council’s representative on the Boulder Urban Renewal Authority and the city’s representative to the Denver Regional Council of Governments.

2019 Bills and resolutions sponsored by Tammy Story were concerned mostly with education. Eight passed in to law, signed by the Governor. One regarding Educator performance evaluation was indefinitely postponed.

Story worked with three short-term summer interim committees: Making Higher Education Attainable, Early Childhood School Readiness, and Zero Waste and Recycling. Committee members investigated these topics with visits and public input forums. Results of input drafted nine bills. All have been introduced, with five bills having been passed and signed by the Governor, while four are still being discussed.

Her year-long committee on Capital Development prioritizes facility needs all over the state. Recommendations for maintenance of buildings is given to the Joint Budget Committee. In the last session only half of the recommended needs were funded.

Gilpin Residents Resisting Increased Jet Traffic (GRRift) began in June to inform residents and local, state and US government officials of the plan to increase jet traffic over Gilpin County. It’s their opinion that the Federal Aviation Administration (FAA) did not adequately assess environmental impacts before the plan was finalized November 2019.

Gilpin County Commissioners have listened and raised concerns through proper channels available. US Senator Joe Neguse sent his staff to Gilpin to hear concerns in mid-December to encourage decisive actions. The FAA received a joint letter from our US Senators; Neguse and Bennett requesting an extension of time to receive comments regarding the plan’s impact on our environment, which was denied.

This Town Hall meeting would allow elected State represnetatives to hear from Gilpin residents who feel they have not been heard by the FAA.

The auditorium of Gilpin County Schools offers over 300 seats, and was about two-thirds full.

CO Representative KC Becker and CO Senator Tammy Story sat at the table on stage and spoke together briefly at about 6:30 pm. Rep Becker began by introducing herself to the Gilpin resident crowd, as the Colorado House Speaker serving our District 13. She announced that her term in office would close at the end of 2020. She thanked residents for coming out to the Town Hall meeting. She has held other town hall meetings in Gilpin, recognizing with joy, that this was largest gathering she has spoken with in Gilpin.

Sen. Story’s introduction included the boundaries within the counties she represents. She highlighted some of the efforts for education and the environment she has supported in her first year in office. She also thanked everyone for coming out that night.

Rep KC Becker suggested a format for the evening to allow other topics of concern to be spoken of from residents first, with about 20 minutes be given to the first topics, which the two of Congresswomen would make responses toward. By about 7 pm, the topic for comments could be opened up to the FAA Denver Metroplex plan that everyone came to discuss.

Five or more residents made comments or asked questions. Most comments were generally focused on concerned with environmental protection in our area.

Rep. Becker replied by explaining her concerns and efforts to address needs of the homeless. Homelessness is one contributing factor to wildfires associated with campfires like the one spread in the Boulder Valley Fire near Nederland a few years back. Fire mitigation was also discussed, historical mitigation efforts, funding supports with grants, and ways to receive Colorado tax credit for personal property mitigation.

Apparently, the tax credit for fire mitigation offered for Colorado residents four years ago was never used by anyone, so has expired. Some are considering offering it again, with better publicity to receive the state tax credit once it has been completed.

Sen. Story says she lives in Jefferson County with the same fire danger we face, so finds this topic of most importance and she has also taken legislative action to address wildfires.

A resident comment included the value of Saws and Slaws helping in Coal Creek area as well as Gilpin to help folks with fire mitigation.

National metropolitan area efforts to enforce laws about homeless sleeping in public places was discussed. Recognizing some of the challenges for providing shelters and facilitating local efforts to meet needs was also covered by input primarily from Rep. Becker. She mentioned how some with the city of Denver have repeatedly attempted to offer resolve for some homeless issues which continue to fail.

Sen Story explained her role this past year in working for environmental issues, including the minute particles that get in the air where there is heavy road traffic, known to be hazardous to health. With much detail she explained the complexity of some transportation issues she is working to improve.

Story also emphasized her efforts to improve access to housing, health care, and her strong interest in public education. She explained some restraints that prevail in Colorado that contribute to having 3,000 education positions being vacant, unable to be filled.

Rep. Becker explained her efforts with the Criminal Justice Bill and the impasse to allow Colorado’s healthy economy to be spread to the benefit of tax supported needs. She included information about the complexities of driving down health care costs, along with the bills and effective management of health care she has supported.

Q: What is the purpose of the Denver Metroplex? What is to be achieved by this change?

Q: This is a federally imposed problem, what can you at the state level do for us? Can you ask Boulder to financially cover the problems they created for us since the traffic is moving from them to us?

Q: How can you help us fund a lawsuit against the FAA? Can the CO Attorney General be counted on to support us since the FAA did not follow their procedures to make the final plan that is detrimentally affecting us?

About this time in the comment period, Jill Grano staff member with US Congressman Joe Neguse’s office arrived who had participated in the last town hall meeting with us in Dec. More comments continued, and later she did join Becker and Story at the table on stage to make comments.

Rep. Becker commented her understanding of the purpose of the Metroplex plan is to improve efficiency, along with more on-time air departures and arrivals, save fuel, and use the satellite guidance system.

We wonder how this affects the roles of air traffic controllers and on-board navigators. FAA has not explained this. We were reminded that DIA claims on their website last year to have been rated 4th best in the world for on-time flights.

Becker continued explaining her understanding about other lawsuits to the FAA where Metroplex plans have been implemented. Some court actions could have stalled the plan, most have failed. Only Phoenix succeeded in stopping the plan, perhaps temporarily.

Becker stated that the best action for Gilpin is to be persistent in making contact to the FAA about the problems, to document the concerns and mismanagement of procedures to facilitate the Metroplex plan.  Colorado can only enforce state laws that the FAA must comply with.

Residents began to pass out a flyer with contact information for those interested in voicing their concerns for the Denver Metroplex plan.

Jill Grano restated some of the attempts Neguse and Bennett have worked to improve situations in Colorado that the FAA have not complied with. She emphasized how passionate Neguse is to have quiet skies.

Gilpin Commissioner Gail Watson commented on the Commissioner’s Board efforts to address the FAA’s plan. Centennial Airport is working to establish an amicus brief, and Gilpin is also working towards that goal to interfere with the finalized Denver Metroplex plan.

Amicus briefs are legal documents filed as appeals in court cases by non-litigants with a strong interest in the matter. The briefs advise the court of relevant, additional information or arguments that the court might wish to consider.

A small plane pilot commented on the challenges to be able to even fly, and the thrill they get to do so. Cost of noise control is very detrimental to their enjoyment.

A comment was made about Golden Gate State Park being the 3rd most visited part in Colorado. A resident’s letter to the park was responded with no concern from them to the increase of air traffic. Others asked if National Forest Service or even Colorado Wildlife Association has been contacted for their defense of the environment to increased air traffic; none was revealed.

Comments about the jet traffic interfering with endangered and non-endangered species and the whole ecosystem were recognized.

Property values and peace and joy of being in the quiet of the forest do not seem to matter to those making the finalized decision to move air traffic to us.

Concern was also recognized that no responses from Jefferson County indicated any problem with the new plan, even though they would also be affected by the flight plans.

Both Story and Becker were very grateful to hear the input and suggestions for options to proceed. They would post results of inquires they committed to make on our behalf could be posted on their websites.

The meeting ended at 8 pm and many residents continued to have conversations as the auditorium slowly emptied. 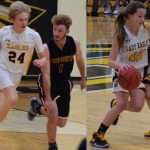 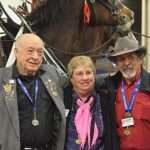