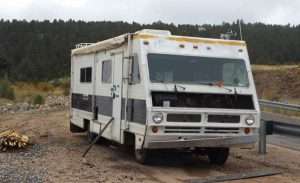 The Gilpin County Board of County Commissioners (BOCC) met on Wednesday August 21 at the Historic Gilpin County Courthouse. Chair Ron Engels along with Commissioners Linda Isenhart and Gail Watson were present along with County Attorney Jim Petrock and Deputy Clerk to the Board Sharon Cate. The only change to the agenda was the addition of Resolution 18-13 concerning the hiring of the new County manager.

Diane Sherlock from the Russell Gulch area wanted to express her concerns about the rock quarry located at the intersection of Virginia Canyon Road and the Central City Parkway. Ms. Sherlock stated that for the last ten years the noise and dust created by the operation is just unreal. Back-up alarms go off all day long and nobody will do anything. She confirmed that the State does not have anything on a rock quarry operation in that area. Commissioner Watson replied that it is a permitted operation through the County. The Commissioners assured Ms. Sherlock that they would contact the Planning Commission to get some additional information and that they would get back to her.

The second public comment was from Roger (Erik) Erikson from the Virginia Canyon Road. He asked the Commissioners for some additional help with the squatters in the Virginia Canyon area. He stated that he appreciates the handling of the Dirk Larsen situation, but camps are being moved around to other properties in the area. Mr. Ericson informed the Commissioners the some of these areas have the appearance of a scene from “Breaking Bad.” This looks like a staging area for production and distribution of drugs from Clear Creek County into Gilpin County. The recent trailer fire in that area had the potential to not only destroy adjacent homes that residents are living in, but it also had the potential to destroy some local historic sites, and if it wasn’t for the remarkable efforts of three different fire departments this could have a lot worse than it was. Mr. Ericson requested that Gilpin County increase code and law enforcement in the area. Commissioner Engels invited Mr. Ericson to stay at the meeting to hear an update from Gilpin County Community Development Director Stephen Strohminger on the Dirk Larsen case.

Gilpin County Assessor Anne Schafer presented a tax abatement request on behalf of Errol F. and Carole A. Salter, represented by Duff and Phelps LLC. In 2017 the applicants filed a previous request for a tax abatement for their 2016-2017 property taxes which was denied. The Salters claim that the tax rate on their land should be taxed at the 7.2% residential rate rather than the higher vacant rate of 29%. Ms. Shaffer stated that the abatement request was denied because the 80 acres of vacant land that the Salters own is not contiguous with the 40 acres they live on. Commissioner Watson replied that this can be solved with a Boundary Line Elimination request. According to Schafer, that option has already been discussed, but the applicants turned it down citing that they would like to someday sell the land as a separate parcel from their home acreage. Gilpin County Commissioners denied the request for abatement. The Salters must now appeal to the State Board of Assessment Appeals if they want to pursue changing their tax rate.

Chief Deputy Treasurer Mary Lorenz presented the July 2018 monthly report to the BOCC. The report once again indicated strong numbers for the month of July with grand total of $13.4 million dollars, up from last year’s grand total of a little more than $12 million dollars. Taxes collected have again taken a slight decrease though. Last year’s percentage was 98.44% as opposed to 2018’s percentage of 97.42%. The reason why the Grand Total is higher but the percentage is lower is due to the higher property values which leads to increased assessments which leads to the increase in the tax property owners pay. Gilpin Commissioners accepted the July report with no changes.

Gilpin County Community Center Director Kyle Benedict presented the final copy of the new After School Program in the form of Resolution 18-12. Currently the after school Program has been available to Gilpin County school kids from grades K-6th grades. The new program will also include teens from 12 to 17. The updated policy will include the new registration form that includes a Personal Release Statement, Code of Conduct, and structured program outline. The Gilpin County Commissioners approved Resolution 18-12 unanimously.

Gilpin County Community Center Director Kyle Benedict also presented a request for $45,000 in additional funds to replace the existing indoor track surface. The current surface is carpet which was installed when the Community Center was built in 2003. Mr. Benedict proposes that the existing carpet be taken up and replaced with “Taraflex” that is a sports specific vinyl flooring commonly found in educational and recreational facilities. The bid presented by Mr. Benedict was from Cody Flooring and Tile Inc. in Golden. The bid is to remove the existing surface, correct any defects to the underlying substrate, and install “Sports M Plus” which is a brand name of “Taraflex.” Total cost will be $81,464. The budgeted amount for the Recreation Center is $40,000 leaving a $41,464 shortfall. The Gilpin County Commissioners advised Mr. Benedict to postpone the request until the 2019 budget hearings to be scheduled for October of this year.

The other item that Mr. Petrock had was the issue of Dirk Larsen and the troublesome property in Russell Gulch. The civil trial is set for September 10th at the County Courthouse to address the many violations that have occurred on the Larsen property. Larsen has requested an extension of the trial date.

Gilpin County Community Development Director Stephen Strohminger provided an update on the Dirk Larsen property. Mr. Strohminger performed an inspection on the property after the fire and he stated that there seems to be some things that have moved or moved around to different properties of different owners. The issue of the camper in the road is no longer an issue as it has been moved as of last Thursday.

Gilpin County Chair Ron Engels has been unanimously appointed to the Colorado Counties Inc. Legislative Committee. Commissioner Watson volunteered to be the alternate.

Gilpin County Commissioners approved a letter of support, with corrections, that will express continued support for the The Land and Water Conservation Fund.

Gilpin County Commissioners also approved a letter of support for the Let’s Go Colorado State Transportation Fund which is a ballot issue that will be presented to voters this fall. The initiative will increase sale tax by .62 % for twenty years or about 6 cents on a $10 purchase.

Gilpin County Commissioners approved the meeting minutes from the August 2 regular meeting, the August 2 Board of Adjustments meeting, and the August 13, 2018 special meeting/executive session.

Gilpin County Commissioners adjourned the regular meeting at 10:36 am.

The next Gilpin County Board of Commissioners meeting will be September 11, 2018 at 9:00 am at the historic Gilpin County Courthouse, 203 Eureka St, Central City Colorado.

For this and any information on Gilpin County business or department visit http://www.co.gilpin.co.us.

END_OF_DOCUMENT_TOKEN_TO_BE_REPLACED

Benefitting the county, schools, and much more By Don Ireland   This year marks the 30th anniversary of casinos opening in the former little mining towns of Black Hawk, Central City and Cripple Creek, Colorado. In those early years, smoking was allowed inside ... END_OF_DOCUMENT_TOKEN_TO_BE_REPLACED

Benefitting the county, schools, and much more By Don Ireland   This year marks the 30th anniversary of casinos opening in the former little mining towns of Black Hawk, Central City and Cripple Creek, Colorado. In those early years, smoking was allowed inside ... END_OF_DOCUMENT_TOKEN_TO_BE_REPLACED