Put Some Colour in Your Life 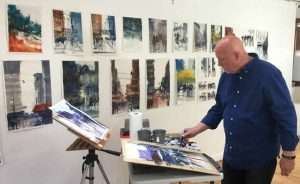 When Denver-based artist, Steve Griggs first visited Washington Hall Gallery in Central City, Colorado in 1989, he said out loud that he wanted to be in a gallery like it one day. At that time Griggs painted as a hobby and didn’t show his work to the public. Little did he know that Washington Hall Gallery would play a dominant role in his future art career, and even include the filming of a TV show about him.

Filming for the Australian-based show, Put Some Colour in Your Life (www.colourinyourlife.com.au/) took place on Thursday, August 9, at Washington Hall Galley. The show is the work of Master Artist and CEO Graeme Stevenson who travels the world visiting artists and highlighting their creative processes. The show airs on stations throughout Australia and the United States and has nearly 100,000 YouTube subscribers.

When Griggs was selected for the show, he considered where filming should take place. Many artists are filmed in their own studios or painting plein air, but Griggs decided he wanted to film the show at the gallery where he got his start as an artist.

Griggs was a studio art major in college at Michigan State University and also attended Art Center College of Design in Pasadena, California. Following college, he worked in interior design and painted in watercolor as a hobby. In 1989 he and his wife, Sue, and son moved to Colorado. On a weekend of exploring Colorado’s historic mining town, Central City, they discovered Washington Hall Gallery. As they looked at the art, Steve declared that someday he wanted to have his watercolor paintings hanging in a gallery like Washington Hall.

Several years later, following the birth of two additional children and a job layoff, Steve plunged into a depression. He began painting regularly as a type of therapy and decided to try entering a painting into a juried art show. The painting was accepted and he and Sue planned to attend the opening reception. On the night of the opening they found the gallery, and upon entering it, realized that they were in Washington Hall, the very gallery where Steve had spoken his desire.

His painting won an Honorable Mention that night. Griggs has gone on to show his work in many local, national, and international exhibitions and has won numerous awards. He is now a full-time artist who exhibits extensively and teaches others his unique painting style. He was also featured in the August issue of Watercolor Artist Magazine.

By filming the TV show about him at Washington Hall, Griggs hopes to give back to the gallery where his art career started. He hopes the exposure will help draw attention and bring more visitors to the charming, historic gallery in the tourist attraction town of Central City.

END_OF_DOCUMENT_TOKEN_TO_BE_REPLACED

Where the dead get to tell their story By Jaclyn Schrock On Saturday, August 21, the Gilpin Historical Society held their annual Cemetery Crawl. Tickets allowed the shuttle of hundreds of guests from the Teller House parking lot to the Cemetery. Depending on v... END_OF_DOCUMENT_TOKEN_TO_BE_REPLACED

Benefitting the county, schools, and much more By Don Ireland   This year marks the 30th anniversary of casinos opening in the former little mining towns of Black Hawk, Central City and Cripple Creek, Colorado. In those early years, smoking was allowed inside ... END_OF_DOCUMENT_TOKEN_TO_BE_REPLACED