Prohibition is coming to Gilpin County 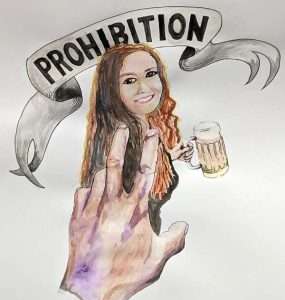 Cast is working hard to bring musical to life

Amid the COVID restrictions, the Belvidere Players, under the direction of Patrice LeBlanc and Ed Schoenradt of L&M Productions, are carefully rehearsing their lines and songs to bring the musical ‘Prohibition’ to performance ready standards. ‘Prohibition,’ written and directed by Patrice and Ed, is a story about a small local town struggling with the seemingly unjust prohibition laws of the 1920s, when along comes a stranger bringing the unique sound of Jazz to the area. Jazz music with its free-form and rule breaking sound reflected the people of this town just trying to get by and adjust to the new eighteenth amendment law.

‘Prohibition’ stars Michael Amory as Jax, the traveling musician who also captures the heart of a local lady. Amory has a BA in theater from Nazareth College and did a commercial with Shannon Sharpe in the late 90s. Michael reflected on ‘Prohibition’ saying that while it is not an issue today, “the fact that the people in this play band together for a common cause, whether it’s racial, wealth, or status related inequality, they do so with the purpose of benefitting the entire town; everyone. Not just the singularity. That’s something that is sorely needed today.”

The cast seemed to come together for Director Ed Schoenradt, with one exception: that of the character Vic, a love interest for a lady of the town with many lines. The first actor could not commit to the rehearsal schedule, and the second had no problems with the lines, but could not quite hit the notes in his songs. Finally, they found Wilson Hettinger to fill the part. Hettinger has been performing since 2013 when he fell in love with musical theater and is currently majoring in Musical Theatre at Metropolitan State University of Denver. Wilson says he was nervous when asked to join the cast due to joining “really late” in the rehearsal process. “What I found,” said Wilson, “was a welcoming, helpful group that has had nothing but open arms to myself and what I bring to the character of Vic!” Reflecting upon the eighteenth amendment, Hettinger comments “I love that as a nation, we can change and repeal amendments depending on societal issues that are prevalent and popular.”

Leah Stockham who plays Etta Whitlock, the judge’s wife, and temperance society member, is the matron of a very talented family. Her daughters: Isabella, Sophia, and Olivia, were all gifted with the ability to sing and act. “They are all so uniquely talented. I’m so proud of the young women they are becoming!” Leah’s father is a musician and he passed down the passion to each one of the family. Leah started acting at a very young age playing Gretel in “The Sound of Music” at the Country Dinner Playhouse with the “late great Bill Mchale.” In the last decade, Leah has directed children’s plays at Ralston Elementary, but never thought she’d get back on stage. “It’s been a lot of fun acting alongside my daughters.”

The poster for Prohibition was drawn by Chuck Roberts who plays Mac and formerly moonlighted as a gunslinger in the Wild Bunch Gang. The lady on the front, proudly holding a mug of beer is Isabella Stockham who plays the main love interest Kory. While not drinking age herself (18), mama Stockham says, “It’s fantastic! I’m going to have to steal one; I’ll proudly display it in my house!”

‘Prohibition’ will have two performances: the first on Sunday, June 6 at the Spark Theater in Boulder (4847 Pearl St.), and the second on Saturday June 12 in the Teller House Gardens (120 Eureka St) in Central City. There is no charge for admission, but donations are gladly accepted, and reservations are required. Be sure the check out one of the first live entertainment events of the year. Drinks will be available; the eighteenth amendment was repealed in 1933 so it’s legal now!