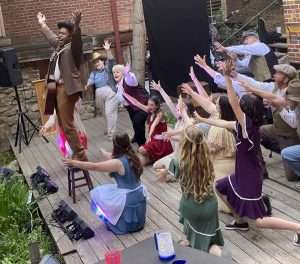 How a SpeakEasy served the community

On Saturday, June 12th the longtime coming production of Prohibition premiered in the Opera House Gardens. A local play created by couple Patrice LeBlanc and Ed Schoenradt, the play features historical references to both the Great Depression and Prohibition. Content in the play consists of social commentary from history that applies to today.

Patrice and Ed are lead members of the Belvidere Theatre Company in Central City and the greater area. They found inspiration and started writing the play on their first date. “My wife and I had a date six years ago. The first date was at a place called the Arvada Tavern and in there was a phone booth. We said what’s that phone booth doing here? It was a real old-looking phone booth. The wait staff said to go inside it. We went inside, and on through it to upstairs where there was a hidden bar. That gave us the idea of the SpeakEasy. We named one of the characters Cory after the lead waitress that day. That is what started the whole thing.”

Years later, Prohibition formed into a two-hour musical. Patrice wrote the music, and Ed incorporated the lyrical components and writing. Ed remarked, “Patrice did most of the music, so it was 70/30.”

As Patrice describes, “The plot is about a SpeakEasy during prohibition, a SpeakEasy called the “Liquor – Ish Parlor.” It’s told through the eyes of Jax, a Jazz musician who wanders in and meets all these wonderful characters.”

The play initially serves love interests and community affairs. Bootleggers, JT and Mac, use the “Liquor- ish” Parlor, a kid-friendly candy store, as a cover for a Bar. Later on, the Great Depression takes hold of the small town. The characters make sacrifices, and ultimately support each other through the difficult times. While the local judge, his wife, and the sheriff find themselves at odds with the bootleggers running the SpeakEasy, they come together in the end as a community to support one another, and the large numbers of migration folks looking for work in the Western United States.

Major themes in the play are that of community and race. “Community is the big one, people coming together in a crisis,” says Ed. Throughout the play, the small town people look out for each other. The town drunk, Casey, saves the “Liquor-ish” parlor during the Great Depression with his mining fortune, and the local judge, Mr. Whitlock chooses not to shut down the SpeakEasy during Prohibition, since it benefitted the community.

The character Jax shares the story from his perspective. He is an African American traveling Jazz musician. He finds himself in the small town, where he works as a musician at the SpeakEasy. Patrice and Ed brought in historical references to the KKK and interracial relationships at the time. Cory a waitress and dancer at SpeakEasy, falls in love with Jax. As the program states, “Content of the play addressed many of the current challenges of today.”

The music in the play is heavily influenced by Jazz. “We went to New Orleans, and it was just such a magical place it inspired quite a few of our songs. I’m a Jazz musician, and Jazz is my forte,” says Patrice. Other musicians chipped in to write slower songs and other musical elements.

An inspiring story, unique and local, came around to be an incredible production after six years of writing, planning and practicing. Prohibition, even with the struggles of a pandemic, left folks smiling and entertained within our own Gilpin Community.

END_OF_DOCUMENT_TOKEN_TO_BE_REPLACED

Benefitting the county, schools, and much more By Don Ireland   This year marks the 30th anniversary of casinos opening in the former little mining towns of Black Hawk, Central City and Cripple Creek, Colorado. In those early years, smoking was allowed inside ... END_OF_DOCUMENT_TOKEN_TO_BE_REPLACED