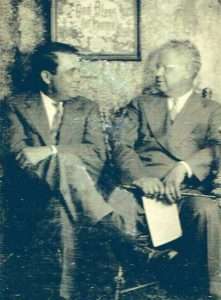 As 1940 began, the great political question was whether or not President Franklin D. Roosevelt would seek a third term with a probable world war on the horizon. Lawyer and business executive Wendell Willkie was frequently mention as a possible successor if FDR retired, but unlike most people, Willkie, who was a registered Democrat, believed that the president would seek a third term. Willkie decided the only way he had a chance at the presidency was through the Republican Party. After changing his party registration in late 1939, Willkie announced that he would accept the Republican nomination if it was offered to him. Willkie and his supporters worked hard behind the scenes at the Republican National Convention in Philadelphia in June 1940 to secure the nomination, after which he returned to New York to begin his campaign.

In July, as the Democrats held their convention in Chicago, Willkie made Central City one of his first campaign stops. The town, which was home to Senator Henry Teller, was no stranger to national politicians, having hosted Ulysses S. Grant several times in the 1860s and 1870s and future president William Howard Taft in the early 1900s. Willkie arrived in Central City, accompanied by Colorado Governor Ralph Carr, on the night of Wednesday, July 17, 1940.

His first stop was the Teller House, where the Weekly Register-Call noted that he walked the same path President Grant had walked in 1873, minus the silver bricks that had lined the sidewalk for that visit. Instead of bricks, a large banner with “Grant, 1873 – Willkie, 1940” was above the main door of the hotel. A large crowd lined the streets to greet the candidate and governor, and the newspaper reported that Willkie greeted their “thunderous cheers” with a wave and a “smile that is most pleasing and sincere.” Willkie and Carr were immediately shown to the Grant Suite on the fourth floor of the hotel, the same room that had been prepared for Grant in 1873.

Willkie was interviewed by KOA radio during the dinner, and the broadcast was heard live throughout the country. Governor Carr said that Willkie and his wife were in town to enjoy the opera production of “The Bartered Bride” for an evening’s entertainment and that the candidate was not concerned with the convention then taking place in Chicago. When a reporter informed Willkie that Roosevelt had been nominated for a third term during dinner he was not surprised and said it should be an exciting campaign.

After dinner Willkie visited the Masonic Temple across the street from the Teller House, where the newspaper reported that he spent about ten minutes looking at the paintings before going to the Opera House for the evening’s production. Once inside the Opera House Willkie went onto the building’s balcony where he addressed the crowd, expressing his pleasure at being in the historic mining town of Central City and pledged his dedication to securing peace. After the opera performance was over, Willkie posed for several pictures on stage with the performers, before returning to the Teller House. There he posed for hundreds of photographs and signed autographs on “every conceivable piece of paper from paper napkins to wine menus.” He also found time to pose for a tintype photo with Governor Carr, probably taken by Emmy Wilson, who would open the famous Glory Hole Tavern on Main Street in 1946, in her tintype shop inside the Teller House.

Willkie and his part left Central City for Denver at about midnight and then flew to Colorado Springs for a campaign stop there. The Weekly Register-Call naturally found many comparisons between Grant’s 1873 visit and Willkie’s in 1940, writing that both were received with “the same enthusiasm that characterizes the thoughts of the people of the mountains,” and that Governor Carr was surely correct when he said that the next time he had the opportunity to introduce Willkie it would be as Mr. President. The newspaper was so enthusiastic in their support for Willkie, who would lose to FDR the following November, that it even mistakenly referred to him as the president-elect.

Wendell Willkie was the last presidential candidate or president to visit Central City. As the 2020 nominations have been announced, if President Donald Trump or Joe Biden visits Central City, they will be in good company, continuing the tradition of those who visited before them.

END_OF_DOCUMENT_TOKEN_TO_BE_REPLACED

Where the dead get to tell their story By Jaclyn Schrock On Saturday, August 21, the Gilpin Historical Society held their annual Cemetery Crawl. Tickets allowed the shuttle of hundreds of guests from the Teller House parking lot to the Cemetery. Depending on v... END_OF_DOCUMENT_TOKEN_TO_BE_REPLACED