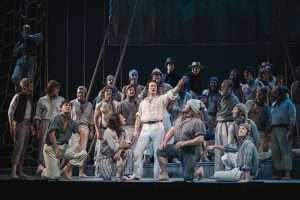 One of Benjamin Britten’s Grandest Operas

The operas of Benjamin Britten are strange. They are powerful, emotional, musically sophisticated, profound, and culturally relevant, but they are also strange. The characters in Britten operas tend to be almost allegorical, only coming into their own as real humans as the plot develops.

Herman Melville’s final, unfinished novella “Billy Budd,” which already had those characteristics, was obviously a uniquely suitable source for Britten’s singular style. And Britten turned it into one of his grandest operatic creations. A composer known for writing chamber operas, with small instrumental ensembles, here wrote for a massive orchestra and, most unusually, an enormous all-male cast.

Central City Opera has made Britten one of its signature composers, and his works for smaller forces, such as “The Turn of the Screw,” are ideal for the house’s stage and its pit. But how would the company pull off a huge piece like “Billy Budd” or one of Britten’s other big scores such as “Peter Grimes?’

Billed as the largest opera ever to grace the Central City stage, the 1950 Melville-based opera—in its standard two-act revision from 1960—opened last Saturday night, July 13, to a crowd that left the performance in overwhelmed awe at what they had just witnessed.

Director Ken Cazan—a CCO stalwart and the driving force behind the company’s push to present all of Britten’s stage works—was remarkably successful at transforming the rather tight stage into a hulking 18th-Century warship, or at least the concept of such a ship. The visuals were arresting, and every inch of space was utilized to optimum efficiency.

Nor did the company make any concessions on the size of the cast. The opera has a strikingly large number of substantial roles outside the three leads, all of which are demanding. The full chorus of sailors is also essential for the work to have its impact. “Billy Budd” must be one of the most difficult of all operas to cast effectively, even if it were not a single gender.

Where there was some compromise was with the orchestra, which was unavoidable. Steuart Bedford’s reduction of the score—made specifically for CCO and other smaller companies—does no violence to the essence of Britten’s original tone color, and it is still a substantial ensemble.

CCO music director John Baril conducted with elegance and virtuosity throughout, leading the indomitable musicians heroically through the complex and demanding score while never allowing them to overpower the singers.

The three lead characters—all iconic literary figures—are the finest testament to the production’s magnificent casting. Baritone Joshua Hopkins absolutely owns the title character, singing the angelic Budd—whom Britten composed almost as a tragic counterpart to Wagner’s Parsifal—with a radiant, full-hearted commitment that continues through Budd’s inevitable fate. The aria in the “Darbies” as the condemned Budd awaits his demise is stunningly rendered by Hopkins, whose interplay with the piccolo riffs from the pit was breathtaking. Hopkins even portrays Budd’s fateful stutter with almost alarming effectiveness, especially in the climactic scene where the stutter dooms him.

Tenor Daniel Norman is an equally imposing presence as Captain “Starry” Vere, who imbues the benevolent, beloved, and tormented captain with palpable humanity, especially in the trial scene and in the prologue and epilogue that frame the action. Vere is really the opera’s central role, requiring the greatest emotional and musical range, and Norman excels at both throughout.

Bass Kevin Burdette provides a terrifying portrayal of the villainous master-at-arms John Claggart, a character Melville described as “naturally depraved.” Burdette’s monologue over the sleeping Billy at the end of Act I and his accusation scene (which precedes his unintentional killing at Billy’s hands) are both chilling. His musicality and diction are always impeccable.

It is not possible to note all the large supporting roles, but a few deserve special mention. Jonas Hacker’s performance of the unfortunate, abused novice Claggart enlists to frame Billy is heartbreaking. Federico De Michelis, Dennis Jesse, and Brian Kontes as the trio of principal officers under Vere are in many scenes the glue that holds everything together.

Among Billy’s fellow sailors, Jonathan Hayes as the confident Donald, Benjamin Werley as the reluctant Red Whiskers (impressed on the “Indomitable” along with Billy), and especially Matthew Burns as Dansker, an old sea salt with a heart of gold, are the standouts. The always wonderful Joseph Gaines makes the most of his scenes as the sycophantic Squeak.

The chorus is amazing in numerous scenes, with the failed attack on the French ship near the beginning of Act II being the most impressively staged and sung. Budd’s execution happens offstage, and the chorus conveys the moment with visceral emotion.

Both the novella and the opera have a homoerotic subtext that is both obvious and understated. Cazan hits every nuance perfectly. The possibility that Claggart hates Budd because of a repressed sexual desire is certainly there, but it is not explicitly confirmed, nor should it be. The other possibility—that Claggart hates him because he is simply evil, depraved, and jealous, that pure evil cannot abide the presence of pure good—is every bit as valid. The affection of other characters toward Billy, most notably Vere himself, is also left open to multiple interpretations.

The production is an important milestone for the company, and it stretches the limits of what is possible on this unique, special stage. A generous investment has yielded a magnificent return, not least of all for the audience. Strange can be stunning and sublime. Here, Britten is all three.

Editor’s Note: our thanks for this review go to Kelly Dean Hansen, Ph.D., freelance classical music writer, to Amanda Tipton Photography, and to the Central City Opera Association.