Power at the net for Lady Eagles 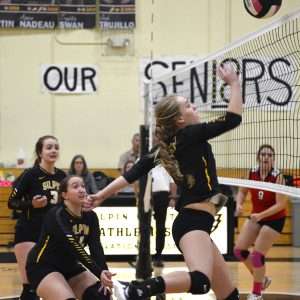 Deer Trail was little competition for Gilpin’s varsity volleyball team last week, as the Lady Eagles soared over their opponents 3-0 in a home non-conference match on October 18. Gilpin also visited the Dawson School Mustangs of Lafayette on October 20 in a final season game, losing 0-3 in that skirmish. The Lady Eagles end their regular season 11-8, 5-6 in league action. Deer Trail’s record is lackluster, but Dawson possesses a 15-5 tally, 9-4 in league play.

Gilpin’s seniors and their parents were honored at the Deer Trail game: Aspen Nadeau and parents Ken and Gigetta, Cicely Lepro and parents Ryan and Jenni, Alex Martin and parents Brian and Katie, Katelyn Armstrong and parents Kevin and Kersten, Trystin Swan and parents Jason and Sonya, and Devyn Branning and mother Tahsha.

As this issue of the Weekly Register-Call goes to press, district quarterfinals are in progress. Final results will be in next week’s paper. Gilpin heads into the fray sixth of eight teams in District 7; Lyons is in first place. Gilpin has two senior players who are leaders in league stats: Alex Martin is fourth in kills, with 170 for the season, and Cicely Lepro is second in assists with 358.

Most of Gilpin’s players got a chance to perform in the Deer Trail game. True to form, Martin led the Eagles in kills with 11, followed by Katelyn Armstrong and Nicole Adams with 4 each. Lepro was tops in serving aces with 9, and Aspen Nadeau contributed 7. Armstrong helped with a solo block. Nadeau got her digs in with 6. Lepro came in with 16 assists to add to her tally, and Nadeau received 7 serves, while Martin handled 6.

No statistics were available for the battle against Dawson.

Gilpin’s gridiron athletes traveled all the way out to Rangely, near the Utah border, for a contest with the Panthers on Friday, October 20, winning 36-28. The Eagles now boast a 7-1 overall record and have 4 victories and no losses in league play. They are second in A-8 Northwest (8-man) standings, and the win against the Panthers puts the Eagles in strong contention for the league championship going into this weekend, when they play as-yet undefeated West Grand.

The Eagles felt very confident going into the Rangely game, as Rangely has won only one game all season. With that in mind, it was a surprise to the Eagles to have a battle on their hands for this league match-up.

The first quarter began well for Gilpin, with 2 touchdowns and 2 conversions. Rangley scored one TD, but was denied a conversion, ending the first period 16-6 Gilpin. The shock came in the second quarter, when the Panthers racked up 22 points to Gilpin’s 8 and managed a brief 28-24 lead. The Eagles pulled themselves together during halftime and came back to score 2 more touchdowns during the third quarter to regain their lead 36-28. The fourth segment showed both teams scoreless.

#19 Austin Boulter was once again selected as Offensive and Defensive Player of the Game. Among his many achievements were 347 yards rushing in 44 carries, a 48-yard touchdown pass, 4 touchdowns and 2 conversions, 2 sacks, and 1 recovered fumble. He is close to surpassing the 2,000 mark in rushing yards.

Several others made outstanding plays for Gilpin. Jack Ball received Boulter’s pass to score the 48-yard TD. Josh Trujillo made 13 solo and 2 assisted tackles, and Angel Gomez came in with 8 solo and 4 assisted. Jaime Alexander hurried the Rangely QB 5 times, recovered 1 fumble, and caused a fumble as well. The team gained 517 total yards.

Those scoring for the Eagles were Boulter with 28 points, Ball with 6 points, and Manny Gomez with 2 points.

END_OF_DOCUMENT_TOKEN_TO_BE_REPLACED

Benefitting the county, schools, and much more By Don Ireland   This year marks the 30th anniversary of casinos opening in the former little mining towns of Black Hawk, Central City and Cripple Creek, Colorado. In those early years, smoking was allowed inside ... END_OF_DOCUMENT_TOKEN_TO_BE_REPLACED