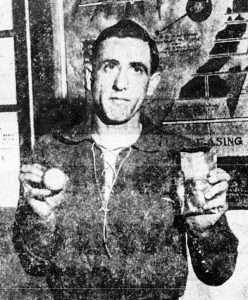 Two 1950’s Newspaper Stories about Pitchblende and a Radioactive Disc

Gilpin County, with its hundred million dollar ore output and its vast mineral wealth has been called on many times to help our nation out of a tough spot, but never so important challenge made as is now coming from the head of the Atomic Energy Commission. Gilpin County is the original producer of pitchblende in the U.S. The challenge is being accepted. At least two old-time producers of the atomic ore are cooperating with the Defense Minerals Administration, and development work is well under way. The German and Belcher mines here made early history in providing pitchblende for reduction into radium.

Pitchblende associated with sulfides occurs in several veins on the south slope of Quartz Hill. For many years a small and sporadic output has come from this group and has been used mainly for specimens and for experiments. Pitchblende has also been reported from the Alps, Calhoun, Kirk, Leavenworth, Mitchell, Pewabic, Wood and Wyandotte mines. The pitchblende occurs as a minor component of the pyritic ores, and most of these mines have been worked for gold and silver rather than pitchblende.

The United Mining and Leasing Corporation’s operation has a modern equipped plan, working smoothly and efficiently, going on their way of opening new ore deposits under a plan agreed on between the Defense Minerals Administration and the company management.

Much ore has been brought to the surface and stacked in various ore bins at the property, the ore consisting of gold, silver and lead, the latter predominating. Ore shipped in years gone by carried values of close to 60 per cent lead, 30 ounces silver and from one to three ounces gold to the ton. It is a refractory ore, but lends readily to treatment. The ore encountered in the present development plan is being held until all objectives have been reached.

The United Mining & Leasing Company has sunk a shaft 1,000 feet to the west of the old Eureka shaft, and miners are now down 175 feet, from which point they are drifting both east and west, and encountering ore in each direction. During the first of the present year, a discovery was made directly under the foot wall of the vein being mined, which from the preliminary work, appeared to be much larger than the vein formerly worked. The vein at point of discovery was 8 feet wide, and carried a nice mineral content. As the management is made up of practical mining men, good mining practice is being followed and a crosscut has already been started to contact the new vein from the bottom level. Reprinted from The Mining Record Denver, Colorado, Thursday, August 14, 1952.

Veteran mining men, mine owners and others familiar with mining equipment and radioactive devices, had never seen such a disk and members of the federal bureau of investigation, the U.S. geological service, the atomic energy commission and the Colorado State Health department were unable to identify it.

The disk was discovered by Morris Steen, 30, of Central City, a millworker for Cherokee Uranium, Inc. Steen said he found the object five days ago enclosed in what appears to be a homemade lead shield.

Steen was “kicking among the rocks” near the Cherokee Mill when he saw what he thought was a chunk of lead. He took it home in his back pocket along with some rocks. When removing the lead to make fishing weights he discovered the disk.

Steen brought the disk to Van R. McKay, president of United Mining and Leasing Corporation in Central City, for identification. McKay couldn’t, but put a Geiger counter against it. The needle flashed clear off the dial.

McKay then took a Geiger counter reading on the hand in which Steen has carried the disk. “If Steen had been ore, we would of shipped him,” McKay said.

Then McKay and Claude Powe, editor of the Central City Tommy Knawker, weekly newspaper, began calling uranium experts. None of those contacted were able to furnish information on the disk by the description the men gave them on the telephone.

The object is about 2 inches in diameter, a quarter-inch thick and has a small glass window on one side. Inside the window a white powdery substance can be seen. The substance glows in the dark.

On the reverse side the metal disk has a clasp, much like a clip used to hold objects on trouser belts. There are two smaller clubs which appear to be used to lock the object to whatever it is attached to.

Also on the back is an inscription which reads: “UNDARK” at the top. At the bottom it reads: “22M-TTR58USRC,” then “poison inside.”

The object is more than 20 percent radioactive. A Geiger counter and a nucleometer owned by McKay can’t register any higher than this. McKay said the object puts out 30,000 counts per minute on a Geiger counter even when held in its lead case.

A radiologist, contacted by the men at Colorado General Hospital, told the men Steen probably would not be harmed by the radioactivity he had unknowingly absorbed, but advised all who handle the object to carefully wash their hands afterward.

“We don’t know what this thing is. All we know is it’s lucky some kid didn’t find it. We just want the owner to identify it and take it off our hands,” McKay said. Steen agreed.

END_OF_DOCUMENT_TOKEN_TO_BE_REPLACED

Benefitting the county, schools, and much more By Don Ireland   This year marks the 30th anniversary of casinos opening in the former little mining towns of Black Hawk, Central City and Cripple Creek, Colorado. In those early years, smoking was allowed inside ... END_OF_DOCUMENT_TOKEN_TO_BE_REPLACED

Where the dead get to tell their story By Jaclyn Schrock On Saturday, August 21, the Gilpin Historical Society held their annual Cemetery Crawl. Tickets allowed the shuttle of hundreds of guests from the Teller House parking lot to the Cemetery. Depending on v... END_OF_DOCUMENT_TOKEN_TO_BE_REPLACED