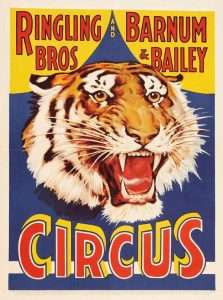 Circuses have provided a great source of entertainment since the 1700’s. In the United States the advent of the circus tent in the 1820’s provided a more reliable means of performance regardless of weather. The 1830’s made the canvas tent system more commonplace. Circuses would travel the circuit and advertise to local communities that the circus would be in town for a few days. After the canvas tents became standard the shows had to travel more to produce a more reliable income to offset constant daily expenses. Advertising had to excite prospective attendees with the anticipation of seeing a fantastic show. By the 1850’s the popularity of the circus was unrivaled in the promotion of the curiosity of the American public. The big shows delivered fantastic entertainment that the locals would talk about for weeks.

Eastern waterways improved the institution of traveling circuses in the East. It was not until 1869, after the Golden Spike had been laid at Promontory Point, UT connecting the West with the East, that a circus was able to travel the Western circuit. In 1847 Edmund Mabie established a permanent winter quarters for a circus in Delavan, Wisconsin. This established the circus as a national institution and made it a national enterprise.

Dan Castello’s Circus originated in Wisconsin and gave its first performance at Frederick, MD in 1868. The circus toured the Midwest, South, and Southwest. Within a month after the rails met in Utah (May 10, 1869) plans for moving his circus west were placed in action. Leaving Omaha, NE, the circus reached Cheyenne and gave performances on May 31, and June 1. Though traveling much by rail, the circus was also a “mud show” and was equipped with horses and wagons to go where the rails did not. Following the Cheyenne shows, the Castello Circus began the 110 mile journey to the south en route to Denver and the mining camps.

The wagons had a rough go of it being stymied by weather and poor road conditions. The two elephants, Jenny Lind, and Hop ‘o My Thumb were forced to deal with cool conditions and precarious footing. Denver’s population at this time neared 5,000 and average attendance for the circuses was 1,700. The Denver City streets were very crowded with bystanders, and the Ute Indians in town to receive payments from the Indian agents also attended the circus. Though they showed no emotion during the performance, one Indian was heard to comment that an elephant would make a good “war horse.”

Following the Denver performance they made their way to Central City and Georgetown to entertain the amusement-starved mining towns. At Central City the circus played to full tents, at Georgetown they did not. Returning to Central City for a fourth day they proceeded then to Boulder and back to Cheyenne for further travel West. One of the elephants had a rough go of it and had to be left behind. It died a few days later due to the difficult journey and the high Colorado elevation. Traveling circuses would often inspire locals to do cartwheels and somersaults around town for weeks afterwards. One circus that came through in the Central City’s early days was held at the Catholic Cemetery for lack of a flat place to perform. The tombstones were removed and laid down for places to sit and replaced after the performance. (Note: this claim cannot be substantiated but is reported to have taken place; No actual documentation exists and is thus subject to scrutiny)

END_OF_DOCUMENT_TOKEN_TO_BE_REPLACED

Where the dead get to tell their story By Jaclyn Schrock On Saturday, August 21, the Gilpin Historical Society held their annual Cemetery Crawl. Tickets allowed the shuttle of hundreds of guests from the Teller House parking lot to the Cemetery. Depending on v... END_OF_DOCUMENT_TOKEN_TO_BE_REPLACED

Where the dead get to tell their story By Jaclyn Schrock On Saturday, August 21, the Gilpin Historical Society held their annual Cemetery Crawl. Tickets allowed the shuttle of hundreds of guests from the Teller House parking lot to the Cemetery. Depending on v... END_OF_DOCUMENT_TOKEN_TO_BE_REPLACED