“Pick a bouquet and throw it away” 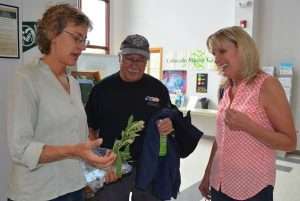 Flower or weed? It’s not just in the eye of the beholder

I’ve lived in the mountains for 20-plus years, but I still falter when it comes to telling the difference between real wildflowers and weeds. After all, weeds can be pretty, and doesn’t that make them flowers? So I went to the CSU Extension’s class entitled, “Noxious Weeds of Gilpin County and How to Control Them,” presented at the Gilpin County Fair Barn on Saturday, July 8 by Irene Shonle. She’s Gilpin County’s extension agent and weed manager. It sounded informative but maybe not riveting.

Actually, the subject was not merely interesting and educational, but very important as well.

First, there is a difference between “nuisance weeds” and “noxious weeds.” A nuisance weed is just a plant that’s growing where you don’t want it, while a noxious weed is not native to the area. It’s considered an alien by rule of law.

Yes, there are actually laws about weeds. Colorado passed the Noxious Weed Act in 1990. In 1999, Gilpin’s Board of County Commissioners adopted a Noxious Weed Management Plan for all of the unincorporated lands with the County of Gilpin by Ordinance 99-1. Almost all other counties also have ordinances pursuant to state law.

Why the need for an ordinance?

It’s because noxious weeds are bullies. They crowd out native plants and reduce habitat; creatures from bumblebees to deer depend on the native plants, and they can die without them. Weeds can erode the soil, increase fire danger, and alter soil properties and nutrient characteristics. Some are poisonous to livestock. They can also be carriers of detrimental insects, diseases, or parasites.

If someone doesn’t manage the noxious weeds on their own property and Shonle is passing by and notices the weeds, she has the power to write them a letter.

“I’m the good cop; it will be a friendly letter telling them we can help them with their weeds,” she says.

If the property owner doesn’t take care of things, Gilpin County Community Development will get involved with a not-as-nice notification.

A fun fact (aka scary thought) by the Bureau of Land Management notes that non-native weeds infest three million acres per year, which is an area twice the size of Delaware. They consume 4,600 acres per day on Western public lands alone. The Colorado Weed Management Association tells us, “Of the 3,000 native plant species in Colorado, up to 500 (17 percent) have already been displaced by noxious weeds.”

How did those alien plants get here, anyway? A lot of them are here by accident. They ride to the U.S. on ships from other countries and make their way across country, hitch-hiking on vehicles or animal fur. Other times the introduction is intentional, as in the case of some ornamental or medicinal plants. They spread quickly because they don’t have their natural controls, like bugs, diseases, soil conditions, or competition.

Weeds in the List A category are designated for eradication because they are not widespread. Examples are myrtle spurge (seen in Nederland and Idaho Springs) and orange hawkweed (spotted in Pinecliffe).

List B weeds have distinct populations and are to be managed to stop their continued spread or eradicated in certain areas. These include Chinese clematis and spotted knapweed, which Shonle says have been nearly eradicated in Gilpin County.

List C varieties are already widespread and are not required to be eradicated. Education and research continues on these species, which include cheat grass and mullein.

What would you guess to be the worst weed in Gilpin County?

You might say the thistle. Actually, it’s the oxeye daisy. That friendly-looking little thing is actually the scourge of Gilpin County. How is that possible?

You know the smell of dirty socks? That’s how the oxeye daisy smells, and no pollinator will go near it. Only flies like it. So it’s harmful because it provides nothing for the deer and the elk. It’s not a garden-friendly plant either, crowding out other garden and mountain meadow flowers.

“If you really like the oxeye daisy, let this be your motto: ‘Pick a bouquet and throw it away,’” Shonle advises.

It’s important to know that seeds can remain viable in the soil for many years. This can make people think that their weed-pulling efforts have little effect. But it does. Just keep doing it. If you go on the attack and prevent even one plant from going to seed, says Shonle, you can rescue a whole area and be a Weed Superhero! Just think — one oxeye daisy can produce 26,000 seeds. One musk thistle yields 100,000 seeds. A leafy spurge plant puts out a whopping 130,000 seeds!

Some weeds are okay, though. These are native and/or not noxious, including white thistles, wavy leaf thistles, fireweed, pineapple weed, yellow sweet clover, and foxtail barley. Additionally, you can plant good alternatives before noxious weeds take hold. Alternatives to the oxeye daisy include native yarrow and showy daisy; try yellow columbine or showy goldeneye instead of yellow toadflax.

If you engage in early detection and understand a weed’s life cycle, you’ll know the best way to eradicate the weed. Please see Shonle’s excellent article on how to control noxious weeds, including information on the Extension’s weed-spray check-out program. Also, call 303-582-9106 or see www.gilpin.extension.colostate.edu.

END_OF_DOCUMENT_TOKEN_TO_BE_REPLACED

Where the dead get to tell their story By Jaclyn Schrock On Saturday, August 21, the Gilpin Historical Society held their annual Cemetery Crawl. Tickets allowed the shuttle of hundreds of guests from the Teller House parking lot to the Cemetery. Depending on v... END_OF_DOCUMENT_TOKEN_TO_BE_REPLACED