People have fought over Colorado water for centuries 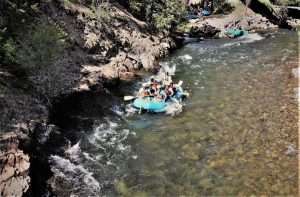 The old adage, “whiskey is for drinking and water is for fighting over,” is frequently attributed to Mark Twain. If the American author and humorist actually uttered those words, historians cannot find written evidence of it in his writings and novels.

Still, fighting over water is nothing new in Colorado and the west.

Around 1870, a group of people from the New York area decided to forego city life and trekked across the country to settle in Greeley, CO. The city was named for famous newspaper publisher Horace Greeley, who coined the iconic saying, “Go West, young man.” The new community’s population was considered religious and prohibited alcohol.

Shortly after they began their new frontier lives, the pioneers learned about Colorado’s harsh winters and frequently dry summers. A lack of water became apparent. Ditches were built from the north to supply water to Greeley residents. However, in 1874, a conflict arose between Greeley residents and upstream farmers from the Fort Collins area over who owned the water in the regional streams, according to Judge Gregory J. Hobbs, Jr. and Michael Welsh in their recent book, “Confluence: the story of Greeley water.”

On a hot summer night, July 15, 1874, people from both sides met in a heated session at a schoolhouse near Windsor. Some brought firearms in a meeting that led to a pivotal point in state history. Rather than exchange gunfire to resolve their dispute, the parties resolved to work together. The result, the doctrine of prior appropriation – western water law – was born and has become a tradition in Colorado, according to the authors.

Even today, arguing over water rights continues. The cities of Colorado Springs and Aurora, which purchased large farms in western Colorado during the early 1950s, recently announced plans to build a reservoir on that land to serve their residents’ needs. However, the plan is being scrutinized from Western Slope residents and organizations.

Other water-related news stories have been common. They include:

–Last year, the two largest wildfires in Colorado history burned hundreds of thousands of acres in the northern and western parts of the state. The impact of those fires on watersheds is being studied because it may affect the quality of water supplies from Northern Colorado and throughout the Front Range. With trees and vegetation destroyed, melting snowpack can lead to soil erosion and, without functional roots in the burn areas, water may not be collected and stored below the ground surface.

About 80 percent of the state’s population lives along the Interstate 25 corridor but the majority of water used by those communities originate on the western slope – in the form of melting snowpack – and are transported through the Continental Divide via hundreds of miles of pipes from rivers, dams and reservoirs.

–Droughts and water issues have captured national headlines regularly, including the Flint, Michigan water crisis in 2014 and the prolonged California drought from 2011-19.

–Westminster residents packed the parking lot at their municipal building this past August, protesting a series of water-rate hikes that have taken place in the community in recent years. Brighton voters recalled their town mayor in December 2019, claiming he knew about $70 million in water rate overcharges and firing the city manager to cover up what allegedly happened.

A Michigan State University study has suggested one in three American families may be unable to pay their monthly water bill by 2023 because of increasing prices. In other areas, “water inequity” is a concerned because lower-income residents struggle to pay for water.

Scholars and authors contend future wars will be fought over water as populations grow and the amount of drinking water is limited. Economists and Wall Street investors have contended for years that water will be a highly-valued and profitable commodity in the decades to come, the same as oil was during the last 100 years.

The importance of the Moffat Tunnel for Front Range water supplies and how Coloradoans use water will be discussed in upcoming installments of this series.

END_OF_DOCUMENT_TOKEN_TO_BE_REPLACED

Where the dead get to tell their story By Jaclyn Schrock On Saturday, August 21, the Gilpin Historical Society held their annual Cemetery Crawl. Tickets allowed the shuttle of hundreds of guests from the Teller House parking lot to the Cemetery. Depending on v... END_OF_DOCUMENT_TOKEN_TO_BE_REPLACED

Benefitting the county, schools, and much more By Don Ireland   This year marks the 30th anniversary of casinos opening in the former little mining towns of Black Hawk, Central City and Cripple Creek, Colorado. In those early years, smoking was allowed inside ... END_OF_DOCUMENT_TOKEN_TO_BE_REPLACED