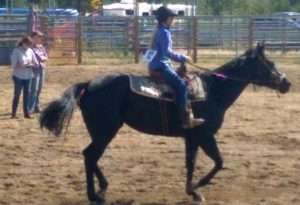 Saturday, July 22nd at the Gilpin County Arena, 16 riders and horses participated in the second of three summer horse shows sponsored the by Peak to Peak Healthy Communities Project. It also has generous support by United Power and a sponsorship by The Mountain-Ear, Nederland Equestrian School, and Ridgeline Consulting. Promptly at 9:00 am the judged riding events began. Previously, most riders had unloaded, prepared and warmed up their horses in the clean arena with only a couple puddles from our recent rains near the announcer’s tower.  Some riders shared horses in different age groups, though sharing a horse in the same age group did not give an official score points for the second rider. One rider had two horses, the first to earn points for the cherished buckle, and the other was to practice and train the horse for future competitions.

Stephanie Weber is the 2017 Gymkhana and Office Manager for the Peak to Peak Healthy Communities Project in Nederland. Registration at the tent near the announcer’s booth was $5 per horse per event. Participation in each event was the best chance of earning the maximum points to earn the buckle. Marielle Gerard judged with an assistant spotter, and the announcer was Rick Newman. Thanks to United Power for sponsoring the event.

The first five competitive events in the order in which they occurred were: Equitation, Barrels, Flag Race, Poles, and Key Hole. The final and sixth event for fun, the Dollar Race, did not earn points toward the Buckle. The scored events had rider age group classes: 40+, 18-39, 12-17, and 11 and under. The highest all around points earned for each age group has the best chance to earn the Buckle, with ribbons awarded to 6th place. Since there are three Gymkhana Buckle events this summer, the rider in each age group with the most points accumulated from all three events wins the Buckle Series on August 19th.

Equitation judges how well the rider does what is expected for Western riding style. Riders were asked by the judges or the announcer to manage their horse in a walk, slow sitting trot, a jog trot with posting, and canter, each to be reversed to go the other direction. All the horses and riders in an age class were in the arena at the same time. The other horses walked the same direction as the one the judge was giving specific directions to for judging. The last part included a combination of all the separate instructions previously scored. Then finally before announcing the ribbon position in the competition, all the horses lined up to face the announcer. At that time, the judge educated the riders on what they saw from each horse and rider team, regarding how well the rider managed the horse, how well the horse responded to requests, and how well the rider enjoyed the experience.

Congratulations to Abby Norman riding Dino, and Allison Hardt-Zeman riding Lucky, in the 12-17 age class for stumping the judges! They kept trying to find ways to get one gal to get a higher score than the other, but they both did perfectly, with two first places.

The Barrels is an electronically timed race and the line is not marked on the ground. Once the horse triggers the timer to enter the event they must do a figure 8 around the two barrels nearest and parallel to their entry. It does not matter which side of the arena they begin the figure 8. The closer to the barrels they can get, the quicker the turn around, though knocking over the barrels adds five seconds to the official time. Crossing the timer two times without finishing the course disqualifies the event for that horse and rider team. Once around the first two barrels, they charge to the third barrel that forms the peak of a triangle with the first two as the base. Once they loop around the third barrel it is a quick sprint back to the start and past the timer.

Of the 17 Barrel Race riders, one had no ribbon place and two disqualified. The average time was 32.422 seconds. The youngest rider was 1 year old Maggie Sue Morgan, riding her horse Lucy, led by her mom and Ali who walked along beside for the slowest barrel score of 1:15.770, which earned two points toward the buckle. The best time came from Ali Nelson in the 18 to 39 year old class, riding Lucy with a time of 18.065. Congratulations Ali and Lucy on your barrels ride.

The Flag Race is also an electronically timed race. Set-up had two barrels, each with a sand-filled bucket on top separated east and west by about 40 feet, and around 50 feet south of the timer line. A young volunteer, Ben, prepared each race by taking one of the small square flags and firmly planting it in the sand for the next rider to grab. The riders started the race with a matching flag in their hand given to them by the previous racer. The rider raced to the first empty bucket and plants the flag from their hand. They go around the first barrel reaching to plant the flag then continued to the second barrel. As they going around it they try to grab the flag and race home. Many flags did not stay planted in the first bucket, so disqualified the time. Some of the younger riders with shorter arms were challenged to reach over for the second flag if the horse was not getting close enough as they circled the second barrel a few times.

Of 12 Flag race riders that took the course, three were disqualified so the average time was 29.841 seconds. Mazi Brooks in the 18-39 age class, riding Bonnie, was the most determined rider to finish. Mazi earned a time of 1 minute 12. 817 seconds which qualified her for a 2nd place ribbon for her age class. The Mazi/ Bonnie team gained another four of her 15 points toward the buckle. The competition in that 40+ age class was stiff with only two disqualifying flags falling out of their first bucket and three very quick scores under 17 seconds, looking so much like the Pony Express riders of long ago. Congratulations for the best time from Nancy Mulholland riding Flip, at only 13.010 seconds.

Bending Poles is another electronically timed race. This set-up arranged five vertical poles about 15 feet apart in a straight line. The first pole was only 21 feet from the timer, and the last about 90 feet. The horse and rider race up past all the poles to number 5, farthest away from the start line. They then quickly weave between the poles back to pole number 1 and turn back up weaving around them back to pole number 5. Ideally, they quickly turn to race back across the finish line. Should a horse miss a pole, knock one over or cross the timer line before finishing the course, they are disqualified. One rider grabbed the pole to steady it after bumping it, but it did not fall, so was able to finish the course for a score.

This challenging agility Bending Poles Race, with 16 riders timed averaged 43.342 seconds. The 4-part racing team with little 1 year old Maggie under that hefty helmet holding firmly onto the saddle horn, had the slowest time of 1:36.620. The  announcer tried to offer a reduction of 15 seconds as a cuteness award also offered for another in that age class that had some of the time being led. Judges would not allow the cuteness adjustment on the official time. The best Bending Poles time came from Jeff Fruth in the 40+ age class riding on his horse Peppy. The 30.528 second ride around the poles 10 times earned 5 points toward the buckle. Congratulations to Jeff and Peppy on that spectacular Bending Poles Race.

The Key Hole Race was also electronically timed. This is the only race that had a ‘boundary’ line drawn with flour on the arena floor. The horse and rider race up to the key hole, turn around inside the circle and race back. There is a 5 second penalty for each hoof of the horse which steps out of the circle.

Fifteen horse and rider teams took the Key Hole Race challenge, one with no place allowed for riding the same horse another rider already rode in their age class. The average time for the Key Hole race was 19.377 seconds. The slowest time came from Flip with Nancy riding. Apparently Flip chose a different course to go rather than the one Nancy was wanting. 12 seconds or under was the time earned by seven riders – that was great team work! Congratulations to Ali Nelson of the 18+ age class riding Lucy for an incredible time of 9.660 in the Key Hole Race.

On Saturday, the second of the three Gymkhana Buckle Series events awarded four buckles to the highest scoring horse and rider teams in their age class.

Congratulations for earning 20 points Ali Nelson, in the 18-39 age class, riding Lucy. This fun team to watch earned 1st place in four events! Lessons may have been learned with an unfortunate disqualification in the Flag Race.

Congratulations for earning 20 points Jeff Fruth of the 40+ age class, riding Peppy. Jeff won first place in each event, only disqualifying in the Flag Race as both flags fell to the ground. He did three warm up circles after entering the arena before crossing the timer to get the best score of 30.528 in the Bending Poles Race.

The winners of the Dollar Bill Race were:

5th place: Nancy Mulholland on either Flip or Flyer