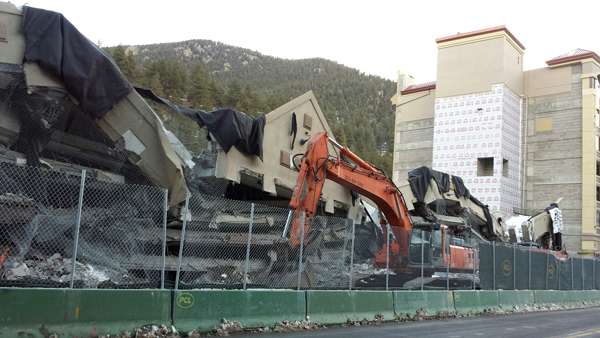 The second golden era of Black Hawk has begun, with the city and casinos making hundreds of millions of dollars in improvements to attract more visitors. On Wednesday, December 21, at 8:30 a.m., Monarch Casino Black Hawk imploded most of its 19-year-old old 5-story parking garage to clear space for a world-class 23-story hotel and spa as part of its $400 million dollar, four-diamond resort development plan. The new hotel is scheduled to be completed in two years and opened in late 2018, and will have about 500 rooms and suites, an upscale spa and pool facility and four restaurants. A small portion of the garage attached to the casino will be manually demolished at a later time, but the majority of the 10,000 pound concrete structure was destroyed in the implosion using more than 300 pounds of explosives which took about 10 seconds with gravity doing most of the work after the detonation. Main Street was closed off at 4 a.m., with Highway 119 closed off at 7:30 a.m. and reopened at 8:45 a.m. The casino reopened at 9:30 a.m., and the new parking garage reopened at 11 a.m.

Mark Loizeaux of Controlled Demolition, Inc. was overseeing the implosion and as part of the six week preparation, had crews wrap the building with a geotextile fabric to control the dust and debris. Loizeaux is a leading global expert in demolition whose family has been in the business more than six decades. He stated that the Monarch owners were looking for the best means of getting the garage down safely and in a timely manner.

Special precautions were taken to ensure nearby Clear Creek would be protected. The creek was covered to limit the amount of dust and debris that could travel from the implosion site. Chris Formanek of Colorado Cleanup Corporation managed this part of the project.

The demolition was closed to the public, but people were able to watch the event live on multiple local media outlets, as well as a Facebook Live event on Monarch Casino Black Hawk’s Facebook page. Drone video was made available and offered an interesting aerial viewpoint.

David Farahi, COO, Monarch Casino Black Hawk addressed Monarch plans for world class spa and resort, stating, “We’re blessed with a lot natural beauty around the city of Black Hawk, and we want to keep it that way. We feel that the city is starved for more hotel rooms, so we’re confident that if you build it, they will come!”

Mark Loizeaux, President, Controlled Demolition, Inc. addressed implosion questions, and the difficulty of imploding a structure in the middle of town in a narrow canyon in between existing structures – the Monarch Casino and the new parking garage.

Chris Formanek, Colorado Cleanup Corporation, addressed demolition clean up and protection of Clear Creek, stating that about 95 percent of the structure will be recycled.

David D. Spellman, Black Hawk Mayor, said that this new hotel is a big step towards Black Hawk’s renaissance as another Colorado year-round recreation destination where tourists can gamble, shop, hike, and bike on the planned 12 miles of trails.

Linda Isenhart, Gilpin County Commissioner, stated that the casino industry employs 2,000 people and is an important part of the county economy.

END_OF_DOCUMENT_TOKEN_TO_BE_REPLACED

Benefitting the county, schools, and much more By Don Ireland   This year marks the 30th anniversary of casinos opening in the former little mining towns of Black Hawk, Central City and Cripple Creek, Colorado. In those early years, smoking was allowed inside ... END_OF_DOCUMENT_TOKEN_TO_BE_REPLACED

Benefitting the county, schools, and much more By Don Ireland   This year marks the 30th anniversary of casinos opening in the former little mining towns of Black Hawk, Central City and Cripple Creek, Colorado. In those early years, smoking was allowed inside ... END_OF_DOCUMENT_TOKEN_TO_BE_REPLACED