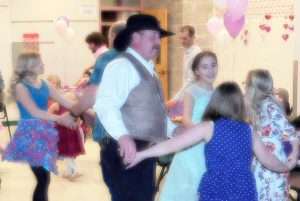 For many years, although no one could tell me when it started, Gilpin County has hosted a father and daughter dance in true Valentine’s Day fashion. Assistant Director of the Gilpin Community Center, Gabrielle Chisholm, had quite a task in front of her to put this together.Chisholm only started her job last October 2017, and did not have the advantage of seeing the event put together under another Director. No worry, Gabrielle comes to our county from Ken-Caryl Ranch where she put on several similar dances. She feels this is an important occasion because it gives opportunity for fathers to bond with their daughters on a night of fun. For many households, girls do not get much quality time with their fathers due to their work schedules or they live in another place. According to the Institute for Family Studies, daughters who have a secure, supportive, communicative relationship with their fathers are less likely to get pregnant as a teenager and less likely to become sexually active in her early teens; not only that, but they are more likely to have relationships with men that are emotionally intimate and fulfilling.

There were about 40 couples registered that night with daughters from four to twelve (almost thirteen – that’s important, you know) years old. The dance was only one element of the festivities; Chisholm added a Valentine making station – popular with the younger crowd, a selfie photo shoot, and a ring toss. Volunteer Dorothy Sweet said one of the differences Gabrielle made was she procured great food. Sweet was referring to the pizza donated by Roy’s Last Shot. Dorothy said she has seen some nauseated girls in years past, but not this year.

Grooving to an eclectic selection of dance tunes; from Ylves’ “What Does the Fox Say?” to Lady Ga Ga’s “Poker Face,” the girls had the time of their lives. Several of the younger ladies left their fathers on the sidelines to form their own dance troupe while others stayed with their daddy’s all night long. Although designated as a couples’ dance, that did not stop several single ladies from getting down. Assistant Director Chisholm boogied down in the crowd with mucho gusto which could not help but bolster confidence and excitement in the room.

As a father myself, I could not help but be swept up in the importance of the evening. I was doing fine until the mood slowed down with Idina Menzel’s “Let it Go” when an ache in my heart grew until I could not stand it. My own daughter could not be there and I realized that I wanted to drop my camera and hit the dance floor with her. She is a young adult now, and I wondered if I spent enough quality time with her. Did I show her what a true man was? Have I taught her how to be wise and discerning when it comes to dating? Has my love for her been enough or could I have done more? Have I given her the confidence to face the world and become whomever she is meant to be? I gazed with envy at the fathers here tonight, because they were doing exactly that; giving an example to their daughters of having a good time with a good man. The love shown to the girls by their fathers will help cement a healthy bond that could last a life time. That’s amore.

END_OF_DOCUMENT_TOKEN_TO_BE_REPLACED

Where the dead get to tell their story By Jaclyn Schrock On Saturday, August 21, the Gilpin Historical Society held their annual Cemetery Crawl. Tickets allowed the shuttle of hundreds of guests from the Teller House parking lot to the Cemetery. Depending on v... END_OF_DOCUMENT_TOKEN_TO_BE_REPLACED

Benefitting the county, schools, and much more By Don Ireland   This year marks the 30th anniversary of casinos opening in the former little mining towns of Black Hawk, Central City and Cripple Creek, Colorado. In those early years, smoking was allowed inside ... END_OF_DOCUMENT_TOKEN_TO_BE_REPLACED