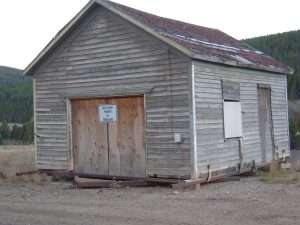 We’ve all seen them in our travels, crumbling relics that obviously served as schools ‘back in the day,’ now forgotten and forlorn. In 1910 nearly 80% of America’s school buildings were one-room schools, and in 1918 there were 190,000 one-room schools across America, concentrated in rural areas of the Midwest and South and in mountain mining locales in the West. As late as 1945, half of our nation’s schools were still one-room buildings. Colorado had more of these as a percentage than the rest of America because of our many isolated mining towns. Today there are fewer than 400 one-room schools across America and these survivors are mostly in small Western mining towns. Many of today’s senior citizens went to a one-room school or lived in a small town surrounded by several in outlying marketing villages.

These schools were simple frame construction, built by the men of the surrounding community. Most were painted white, a few, red. Originally the blackboards were just that: boards painted black for student use. Usually each student had a small slate board to use and reuse, but large slate blackboards for schoolroom walls came later and made the individual slates obsolete.

Teachers in one-room schools were usually single women and they lived in one room of a family’s home near the school because it would be unseemly for a young, single woman to live alone. Occasionally a ‘teacherage,’ or small house, was built near the school for a married teacher’s (male or female) family. A teacherage still exists near Florissant and has been placed on the list of National Historic Sites. Often the teacher was a former student in the school who had “gone away” for a year’s training at the state teacher’s college. This was the path followed by LaVerna Mitchell of Gilpin County. After a year’s training she returned to the Bay State one-room school near present-day Hwy 46 in Golden Gate Canyon. In addition to teaching all eight grades, LaVerna rode her horse to the school at dawn to clean the room, start the fire, begin a soup or stew for the student’s lunch and shovel any snow that had fallen. That last chore was somewhat rare for LaVerna, as the Gilpin County schools, unlike their cousins on the Colorado plains, only held school from early May through September because of the heavy snowfall above 9,000 feet elevation.

Schoolhouses became the social centers for the surrounding farming, ranching or mining community. In addition to hosting holiday programs and graduations, the buildings were used for neighborhood meetings, dances, socials, and polling places.

The Thorn Lake schoolhouse is the last surviving one-room school in Gilpin County and has been declared a Gilpin County Landmark, despite its checkered past. Thorn Lake district #10 had its start on February 28, 1889 when the county received state money to help organize a new school district in the northeast part of the county. The school was not built until 1896. The building served as a school through 1931 but in 1932 its students were bused to Black Hawk. Then the “moving history” of the school began – in its 120-year history it has been moved four times.

The school building was moved to Rollinsville in 1960 to serve as a volunteer fire department station. That’s when the door was cut into one end of the building for the fire engine. The building moved again in 1967 to Gap Road (close to where it had started as a school) to serve as a volunteer fire department building there, but it quickly deteriorated into a storage building for the family owning the property it sat on. The owners of that property agreed to donate the structure to the county, who declared it a Gilpin County Landmark on April 3, 2007 and moved it again to Rollinsville the next year. But when the owner of the land it occupied in Rollinsville died, it faced one more move – across Tolland Road to land owned by the county. Now it has a permanent home.

A State Historic Fund grant allowed the Gilpin County Historic Preservation Advisory Commission (HPAC) to have its history and structural integrity researched by professionals and the HPAC plans to restore it. However, the building needs to serve a purpose; it is hoped it can become a Visitors Center/Museum for the thousands of visitors who travel on the Tolland Road each year.

Article previously published in the Gambler.

END_OF_DOCUMENT_TOKEN_TO_BE_REPLACED

Where the dead get to tell their story By Jaclyn Schrock On Saturday, August 21, the Gilpin Historical Society held their annual Cemetery Crawl. Tickets allowed the shuttle of hundreds of guests from the Teller House parking lot to the Cemetery. Depending on v... END_OF_DOCUMENT_TOKEN_TO_BE_REPLACED