One lone booster left in Town of Nevadaville 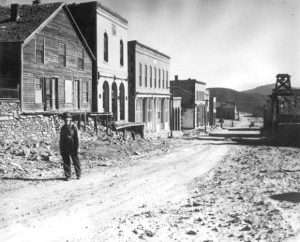 Rocky Mountain News, June 3, 1930: “Nevadaville, one-time boom mining camp of the Central City district, is not dead—not by a long shot and the civic pride of its one inhabitant. Merely suggest that it is a ghost city, and Leonard Nichols, aged hermit, will resent the imputation. New distinction has come to Nichols, distinction given to few men in the United States. He is the sole inhabitant of the entire settlement. Uncle Sam sent a census enumerator to Nevadaville the other day. The enumerator looked high and low, then recorded “One Resident.”

Leonard Nichols was basking in the sun on the board walk of Main Street. “Things are rather quiet around here now,” Nichols said. “But they’ll come back. I know they will. There’s still a lot of gold up there in those hills. Nevadaville’s no ghost camp like a lot of these once-booming mining towns of the West. It’s not so bad off. Some camps don’t have anybody left at all.”

The old settler says he never gets lonesome, even if he is the only human being in the deserted town. Until recently he made it a custom to visit Boulder at least once a year. But lately he abandoned those trips, and decided to stick in Nevadaville. Last winter he went to stay in Central City, the county seat of Gilpin County, but life was too fast for him in that town of 500. He went back to the camp where he is lord of all he surveys. When he was threatened with a fuel shortage, all he had to do was tear down an old frame store building along Main Street. By spring only one side and the back wall were left standing. Nichols remembers when Nevadaville had a population of 1,000 and 15 saloons. Mines were humming, and one hillside alone was reported to have produced nearly $20,000,000 in gold.

But eventually the mining industry slumped, and then the World War put an end to it for the time being. Families moved away, leaving their household goods behind as a cheaper process than moving them over the difficult mountain roads. Children left their school books in their desks. The old school piano stands today just as the teacher left it, but it is covered with dust and the strings are rusting. Time doesn’t move fast in Nevadaville anymore. Until quite recently anyone could read in the empty store windows the Liberty Loan posters of the World War period, urging the passerby to buy bonds to help “crush the Hun.”

In the post office window a yellowed newspaper of 1916 broadcasts dully the triumph of Babe Ruth in a baseball pitching duel at Fenway Park, Boston. But those things were put up previous to 1920, when the town still boasted 500 population. Today only Leonard Nichols is there to read them, and he’s seen them so often he’s no longer interested. But don’t tell Nichols Nevadaville is dead.”

In 1915, there were only two saloons left in Nevadaville, the Miner’s Arms and the Kramer Saloon. Both of which would close before yearend. The Kramer family moved to Golden. Prohibition in Colorado started January 1, 1916, four years ahead of the rest of the Nation. The 18th Amendment went into effect on January 16, 1920. The 18th Amendment prohibited the manufacturing, transportation and sale of alcohol within the United States. The 21st Amendment was repealed the 18th on December 5, 1933. In the nearly 250 years of the U.S. Constitution, the 18th is the only Amendment that was ever repealed.

In his book, The History and Laws of Nevadaville, Colorado historian Nolie Mumey states: “In 1932, Nevadaville had an absentee Mayor, City Clerk, Assessor, Treasurer, Marshal, Fire Chief, and Board of Trustees. All the authority for control of the town was vested in John Doran, who resided in Central City.”

Gold mining in Gilpin County was declining, according to geologist Terry Cox, in his book, Inside the Mountains. “Too many mines were played out and tunneling was very expensive. By the beginning of World War I, gold production slipped to less than 20,000 ounces, and it continued to drop during the war. It was obvious the district would never recover. The point was cruelly underlined when the Colorado & Southern Railroad stopped its rail service to Central City in 1925.”

Central City historian Louis J. Carter, in his book, Yesterday was Another Day, recollects about Nevadaville: “In 1914, when Gilpin County was enjoying one of its better times, the Crown Prince of Austria was assassinated and the First World War began. By August 1914, England and her dominions were engaged in the war and this stopped the flow of development money from England to Gilpin County. On April 6, 1917, America entered into this World War and thereafter by edict declared that the mining of gold contributed nothing to the war effort and that gold miners should seek employment in industries that did contribute to that effort. Then began the exodus and Gilpin County people were on the move.” Mr. Carter goes on to write, “No people ever met the loss of their homes with more courage or the exodus there from with more resistance. There was not only a hope but a belief upon the part of these people that once the War was over, the mines would again begin operations and their problems would be solved.”

END_OF_DOCUMENT_TOKEN_TO_BE_REPLACED

Where the dead get to tell their story By Jaclyn Schrock On Saturday, August 21, the Gilpin Historical Society held their annual Cemetery Crawl. Tickets allowed the shuttle of hundreds of guests from the Teller House parking lot to the Cemetery. Depending on v... END_OF_DOCUMENT_TOKEN_TO_BE_REPLACED