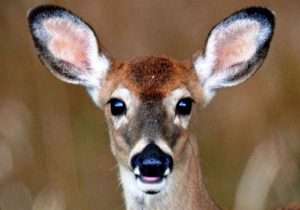 What to do if you hit a deer with your vehicle

Shortly after 8 am on Monday, an excavation truck going east on Upper Coyote Circle knew just what to do. Four deer bounded uphill from a driveway and two were hit although the truck was desperately attempting to stop. An injured young doe escaped downhill. It was not known if the injuries were life threatening. The one doe that continued uphill was badly injured and fell about 15 feet over the 10 foot high road cut.

According to Colorado State Patrol Trooper JM Tinajera, this driver did all the right things. He tried diligently to give the safest care to the occupants of the vehicle, the wildlife, the vehicle and other drivers.

What do you do when you hit a deer?

2.Move vehicle out of traffic if possible, using flashers.

4.Do NOT approach a wounded wild animal. Stay clear of the injured animal, shock and pain prompts unpredictable behaviors in any animal.

This young doe was so badly injured permission was given to put the animal down. This deer was put out of misery by a bow and arrow the driver had in the truck.

Having reported the injury, CSP gives safe instructions, to apply state law. Colorado law forbids a shot not to be made within 50 feet of the center of the road. These requirements were followed by the driver using a bow and arrow.

The doe was officially considered road kill once the Colorado Parks and Wildlife inspected the animal to verify it had not been illegally taken. Recording the location, breed of animal, sex and approximate age is needed to gain a roadkill permit.

In Colorado and 27 other US States, an animal smaller than a raccoon or a skunk killed do not need to be reported. Report the larger animals so they can be taken from the crash site to process any remaining meat. A roadkill permit can be acquired later, with a CPW officer inspection to verify it was a crash and not simply a poached animal.

5.Move the dead animal off the road, to avoid further accidents. This doe was drug down to the road, and a downhill neighbor took the deer to process the remaining meat. The driver gave up the right to keep it.

6.Assess the damage to your vehicle. An officer responding can provide a case number helpful for an auto insurance claim.

7.If your vehicle has parts missing making it illegal to drive or is in any way inoperable,  contact your insurance company to have the vehicle towed.

We are all extra careful to watch for animals moving near or crossing roadways in the mornings and evenings when they travel the most. They can be startled though and move at other times of day too.

Please be safe driving through our forests and canyons, especially when the sun and smoke make visibility challenging.

Some people who frequently use roads that animals travel are prepared. Being experienced at butchering, they carry tools to safely retrieve meat that has not had internal organs spill or contaminate it. If they don’t eat it, they give it to pets.

Now you know what to do if you can’t avoid hitting an animal on the road.