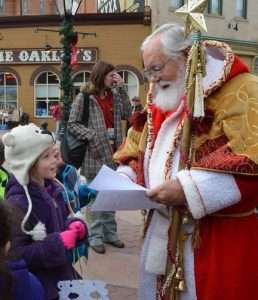 ‘Tis the season! A jolly group of Gilpin school children from kindergarten through fifth grade paraded through the streets of Central City on Thursday, December 4, bearing handmade ornaments to hang on the City Christmas tree. The youngsters festooned the tall pine with cranberry and popcorn garlands, green construction paper trees, pure white snowflakes, and festive reindeer. Proud parents and teachers looked on and snapped precious holiday pics. The parade and a fun time of songs and storytelling opened the 17th Annual Tommyknocker Holiday Weekend.

Kindly Father Christmas, aka Ken Porter, was on hand to welcome the students and accept their letters to Santa, which were printed in the children’s best handwriting and embellished with drawings of trees and candy canes.

“I’ve been good …” “I would like a puppy … a new dress …” What Santa Claus could resist these earnest pleas?

This was the fourth year for Porter to play Father Christmas, and he really looked the part with his white hair and beard, garbed in a beautiful red robe with soft white cuffs and a gold and red cape. He carried a tall staff topped with a shining gold star, long tassels, and golden bells. The richly beautiful costume was made several years ago by Tommyknocker co-organizer Barbara Thielemann. She herself was pink-cheeked Mrs. Claus, smiling in her red velvet gown and white cap. Shirley Voorhies also co-coordinated the event along with Thielemann.

After the ornaments were hung, the students trooped to the Teller House, where Gilpin’s middle school choir waited to perform for their younger siblings and friends. Their director, Gary Haarbye, led the choir in several numbers.

“Where are my chipmunks?” Haarbye began. The first grade class “chipmunks” stood up to help the choir with the classic, “Don’t Be Late.”

Audience participation was encouraged as the choir performed “I Saw Mommy Kissing Santa Claus,” “Jingle Bell Rock,” and “We Wish You a Merry Christmas.”

Then it was time for professional storyteller Dianne Wittmann of Idaho Springs, who held the children spellbound with “Silver Packages.” A doctor recalled childhood memories of kindnesses done by strangers to fulfill his needs, and he returns to repay his debt of gratitude.

Like all great storytellers, Wittmann had a visual aid – an intriguing box wrapped in silver paper. When the kids asked if they could open it, she shook her head regretfully.

She then gave the children the tale of Oliver Cromwell banning Christmas. A subtle history lesson was included; Cromwell was prime minister of England in 1647.

Not celebrate Christmas? Unthinkable! Yet, even the spicy smell of fruitcake could land a celebrant in jail. And a nosy police lieutenant managed to sniff out the aroma of a baking cake.

Now, as everyone knows, fruitcake is a hardy holiday treat. Wittmann wove a suspenseful and amusing story of one particular fruitcake that flew out a window, got rolled into the head of a snowman, used as a football, and shot out of a cannon, all while the lieutenant tried to track down the evidence and the Christmas perp.

Wittmann used several tools to engage the children: questions, gestures, humor, and sound effects that made the stories engrossing.

As the afternoon’s merry entertainment came to a close, the students received treat bags and paraded back to their buses.

With visions of happy holidays dancing in their heads, they were no doubt thinking, “Hurry, Christmas! Don’t be late!”

END_OF_DOCUMENT_TOKEN_TO_BE_REPLACED

Benefitting the county, schools, and much more By Don Ireland   This year marks the 30th anniversary of casinos opening in the former little mining towns of Black Hawk, Central City and Cripple Creek, Colorado. In those early years, smoking was allowed inside ... END_OF_DOCUMENT_TOKEN_TO_BE_REPLACED

Where the dead get to tell their story By Jaclyn Schrock On Saturday, August 21, the Gilpin Historical Society held their annual Cemetery Crawl. Tickets allowed the shuttle of hundreds of guests from the Teller House parking lot to the Cemetery. Depending on v... END_OF_DOCUMENT_TOKEN_TO_BE_REPLACED