Off Road Vehicle plan in the works 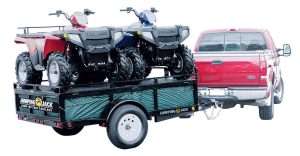 The Central City Council met with Staff on May 1, 2018, for a work session prior to the regular council meeting. The topic of conversation was All Terrain Vehicle (ATV) and Off Highway Vehicle (OHV) regulations if a recreational program is installed within City Limits. The Council was presented with a proposal to allow ATV and OHV operations on designated City streets along with samples of policies from other Colorado municipalities. Any such program would be brought to Council by Ordinance allowing public input and changes to be made before finalizing or denying the Ordinance.

Director Ray Rears summarized the proposed program and it would include OHV/ATV traffic on parts or all of Eureka, Main, Lawrence, Gregory, Miner, Pine, and Prosser Streets. The vehicles would be allowed to park in any designated parking spaces and they would need operator permits for the City which would be available at the Visitor’s Center and any retailer desiring to participate in the program. The Council was cautioned about applying a fee as licensing and registration are handled by the State and municipalities are not allowed to venture into that territory; however, they would research existing fees in other areas to see how they are handled.

Alderwoman Mary Bell interject that perhaps they should consider a “blue law” for homeowners so that if they own an ATV, they may drive them straight from the homes instead of loading them up on a trailer just to tow them two blocks to an allowable area. Mayor Kathy Heider immediately responded saying she was against it and cited the congestion of Casey Street which already makes travel difficult without adding other types of vehicles. Alderwoman Bell replied, “I disagree,” to which the Mayor stated, “Of course you do.”

When Director Rears explained the idea of allowing the trucks and trailers transporting the vehicles to park, unload, and load in the upper third of the T-Lot (across from City Hall), the consensus of the Council was to not allow that. Mayor Heider expressed the concern that especially during the summer months, the T-Lot is well used and having vehicles park there taking up two to three spaces is not a great idea. Alderman Aiken, and Alderwomen Voorhies and Laratta had similar views. Alderwoman Bell would like to explore compromises before abandoning the idea.

City Staff expects this program to be introduced at the next regular council meeting, on May 15, as an Ordinance. They welcome public input for the program.

The Mayor called for a motion to approve the consent agenda which consisted of the minutes from the April 17 meeting and regular bill lists through April 25. Alderwoman Laratta moved to approve the Consent Agenda and was seconded by Alderwoman Voorhies. The motion passed unanimously.

The Council reviewed a request to extend the time on a permit for music at the Teller Lot on June 9 for a jazz event. The City has a noise ordinance that begins at 10:00 pm and the organizers for the event requested that be extended until 11:00 pm. Alderman Aiken moved to approve the request and was seconded by Alderwoman Bell. The motion passed unanimously. Alderman Aiken added that there will be a public question and answer session regarding the Jazz Festival hosted by the Elks Club on Saturday, May 5, from 9:00 to 10:00 am.

Plan Ahead to Write In

City Clerk Reba Bechtel introduced the first reading of Ordinance 18-04 which would amend the Municipal Code concerning Write-In Candidate Affidavits and adding a new code regarding the Cancellation of Elections. The deadline to declare as a Write-In candidate is currently 20 days prior to the election, but the Ordinance would extend that to 64 days prior to an election. The reason for this change is the 20-day time-limit is an out dated limit and to be timely for overseas ballots, should be extended. The City Code has no language regarding the cancellation of elections should there be no contending candidates for any single office, other than to refer to statutes. This Ordinance would insert language into City Code that mirrors current statutes. Alderwoman Laratta moved to approve the first reading of Ordinance 18-04 and set the second reading and public hearing for May 15 and was seconded by Alderwoman Bell. The motion passed unanimously.

Alderwoman Laratta reported on her progress to improve the exterior of the houses owned by the Central City Opera. She offered to paint the house at 109 Spruce Street and even offered to supply the paint. “For the record,” stated Laratta, “I painted my own house two summers ago and for the record, the Opera couldn’t wait to inform me that if I go onto that property, I would be trespassing.” Laratta expressed her belief that when a property owner is not able to take care of their own property and when the community is willing to help out, they should allow them to do so. “I think our whole City has to look bad because of our opera houses. I suggest we take our $25 thousand we normally spend on the opera and spend it on the Belvidere Theatre instead. That’s the way I feel about it.”

Mayor Heider opened the floor to the public for anyone who wished to speak to the council on any items not on the agenda. No one chose to address the Council at that time.

The Council adjourned the regular meeting at 7:25 pm. The next regular Council Meeting will be Tuesday, May 15, 2018.

END_OF_DOCUMENT_TOKEN_TO_BE_REPLACED

Benefitting the county, schools, and much more By Don Ireland   This year marks the 30th anniversary of casinos opening in the former little mining towns of Black Hawk, Central City and Cripple Creek, Colorado. In those early years, smoking was allowed inside ... END_OF_DOCUMENT_TOKEN_TO_BE_REPLACED