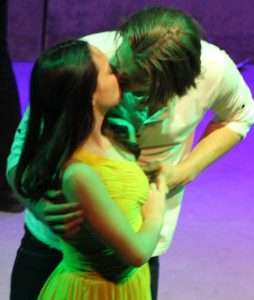 A Peak to Peak Players Production

Tackling a well-known Shakespeare play might be a daunting task for some, but the Peak to Peak Players did it with ease. They might be a hidden and an undiscovered gem within mountain communities, but that doesn’t stop them from producing highly professional plays that are set to blow audiences of all ages away.

“We started last November with auditions with a young cast then moved into text work and verse starting in December. This really was a year-long process leading up to this point,” said Director Mark Ragan. The play ran from May 25th to June 2nd and crowds packed the Dairy Arts Center in Boulder to see their fellow community members perform a timeless classic.

Ragan and his cast put their own twist on the beloved and most famous of the Shakespeare plays, Romeo and Juliet. They quickly established that their version was not just about the star-crossed lovers, but the fact the Romeo and Juliet have free will to make decisions that ultimately leads them to their death. “Shakespeare was a clever guy as shown by the famous prologue where he leads the audience to believe the play is about the lovers as if their destiny is already made for them. “I hope the audience understands that we tried to lay out every turn that leads them to the tomb,” said Ragan. That is exactly what Ragan and his players did throughout the play. From the second scene the audience is surrounded by the cast and is being lead down perhaps this “false” path of destiny for the lovers. The rising conflicts between the two households the Capulets and Montagues causes this forbidden love in the first place. However, we see quickly the turn of Romeo and Juliet as events unfold from tragedy of loved ones dying, to Romeo being banished, and the ultimate turning point of Romeo hearing the “false news” that his beloved Juliet is dead just to avoid having an unwanted marriage forced upon her. These turn of events were laid out in a manner that put the audience on the edge of their seats even though they already knew how the play ultimately ends.

Perhaps the most difficult task may have been how to get the audience and actors to understand the depth of Shakespeare, but it seemed like Ragan had the answer. “Key to all Shakespeare is to get your actors to really understand the text and then deliver the lines in a way that the audience understands, whether that’s through paraphrasing, or even improv and delivery.” Presenting Romeo and Juliet in a new and unique way is exactly what the Peak to Peak players did.

As the troop as a whole grows, trying to get known is a slow process Ragan said. “You have to win over customers one by one. And with theater not being well-known in the Gilpin community, the approach is to start at a young age. In Romeo and Juliet we had a lot of children ranging from 12 year olds on stage to even backstage that came from the Gilpin County School. The key is to start with the kids and once they are excited, then it’s a cycle.” Adding this challenging element of being a young cast really makes this production stand out even more as they featured actors closest to the age Shakespeare intended it for, and that began with 17-year-old Grace Pouliot who played Juliet.

To get involved with Peak to Peak players, anyone can come by at any time to audition or lend a hand to backstage help. They are hosting two summer camps this summer, as well as the upcoming production Shrek The Musical which is being held at Gilpin County School. They are even providing acting lessons held at Ragan’s own home that are taught by former Peak to Peak actor Jess, who has a Masters in acting. You can contact them at admin@peaktopeakplayers.com, or check out their website at https://peaktopeakplayers.com.